Renowned art collector François Pinault has revealed plans for a “completely circular museum” that will be located within a 19th century, domed structure that once housed the Parisian Stock Exchange. To accomplish this, Pinault has enlisted the services of Pritzker Prize-winning architect Tadao Ando, whose design calls for the construction of a giant concrete cylinder located directly below the building’s soaring rotunda. 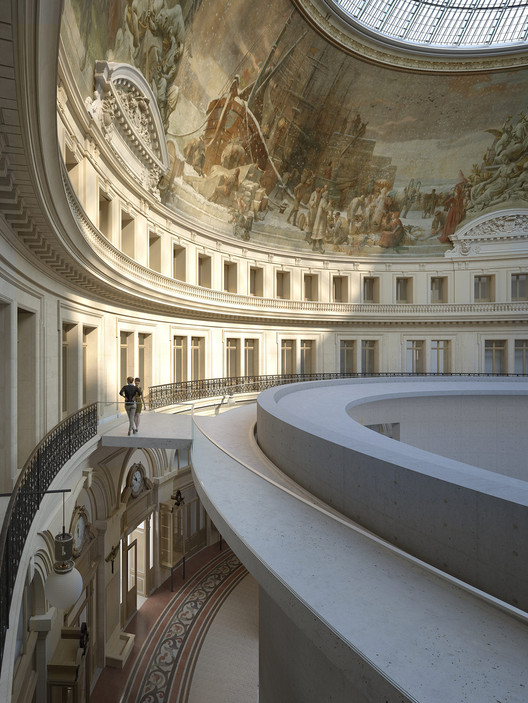 Ando’s scheme comprises five floors, including three levels of gallery spaces, a black-box theater, a restaurant and a below-ground auditorium within the concrete structure, spaced away from the existing walls to create a circulation corridor. Approximately 9,800 square feet of new gallery spaces will house pieces from Pinault’s vast contemporary art collection, including works by Mark Rothko and Damien Hirst.

Plans also include restoration of the building’s exterior and historically landmarked interiors, including internal walls, skylights and frescos. Further preserving the building’s historic integrity, all changes made to the building must be reversible, according to a deal made been Pinault and Paris mayor Anne Hidalgo.

The museum is expected to cost about $121 million to complete, with opening anticipated for 2019.

Learn more about the project at The Guardian and Vogue.

The 1995 recipient of the Pritzker Prize Tadao Ando (born 13 September 1941) is highly regarded for his unparalleled work with concrete, sensitive treatment of natural light, and strong engagement with nature. Based in Osaka, Japan, Ando's ascetic yet rich version of modernism resonates with the traditional Japanese conception of architecture, and has caused him to be regularly referred to as a "critical regionalist."