The capabilities of personal 3D printing and fabrication are only beginning to be tested, but a new system is pushing the boundaries for feasible, structurally-sound large scale structures. Unlike other structures created by 3D printing systems, Trussfab doesn’t require access to specialized equipment, nor specific engineering knowledge, to print and build large-scale structures capable of supporting human weight. Phd researcher Robert Kovacs with his team from the Human Computer Interaction Lab at the Hasso Plattner Institute in Potsdam, Germany created Trussfab as an end-to-end system allowing users to fabricate sturdy, large-scale structures using plastic bottles and 3D-printed connections, making them easy and relatively quick to construct. 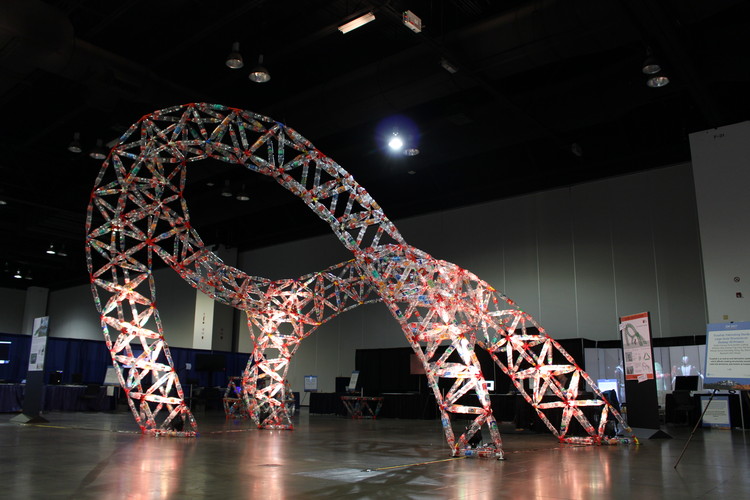 Trussfab treats plastic bottles like beams, forming structurally-sound closed triangles which join together to form trusses. These trusses are the basic building blocks of any Trussfab structure. The Trussfab editor is available as a plugin to Sketchup, in which the embodied engineering knowledge within the program allows users to validate their designs using the integrated structural analysis. The Sketchup plugin has the option to automatically convert an existing 3D model into a Trussfab structure, in addition to the capability to build and manipulate a structure from scratch.

Trussfab’s Sketchup editor offers primitives as building blocks in tetrahedron and octahedron shapes. The initial shapes can then be manipulated, however, and Trussfab’s system adjusts the model in a way that automatically maintains the truss structure and the overall structural stability. After a structure is designed, Trussfab generates 3D model files of all the necessary connection hubs for each node, which users can then send directly to a 3D printer. Unique IDs will be embossed into the 3D-printed pieces for clarity, allowing users to then assemble their structure using standard sizes of plastic bottles (Trussfab will show where each bottle size is needed).

With only Trussfab’s Sketchup editor, a desktop 3D printer, and the necessary materials, anyone can now design and fabricate a large-scale structure capable of supporting human weight. Once the main truss structure has been created, users can also add decorative facades and other details. For non-structural parts of a design, if desired the Trussfab system will also design flat facades with hubs that can be laser-cut instead of 3D printed, the files for which are also automatically generated.

At the recent CHI’17 conference in Denver, the team constructed a Trussfab pavilion designed by architect Oanh Lisa Nguyen Xuan, which was 5m high and consumed 1268 bottles and 191 3D-printed hubs. The pavilion took about 6 hours to assemble on site, a time-lapse of which is shown in the video below. Another video describing the process can be watched here as well. 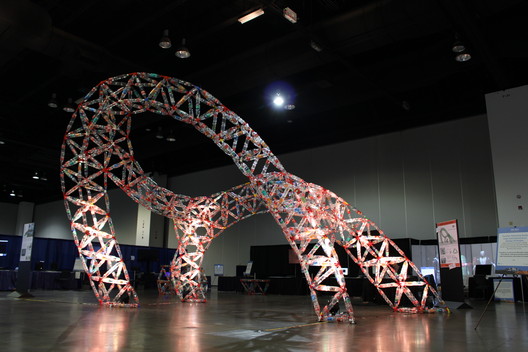