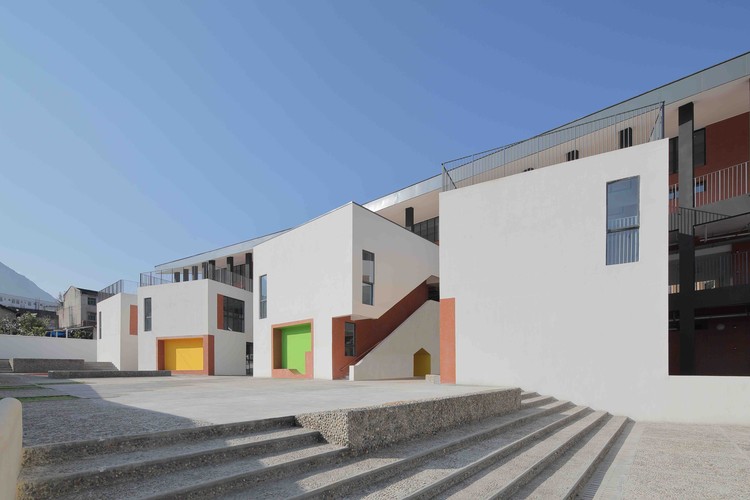 Text description provided by the architects. As part of the reconstruction effort after the Lushan earthquake, Jixian kindergarten, a project of the kindergarten donation program in Ya’an from One Foundation, is located in Tangjia Township, Hanyuan County where in the distance are range upon range of mountains and hills, as well as on the horizon is the opening of valley.

It is a tight ‘budget’ that the land area of the project is only 2940㎡, comparing with the construction standard which specifies at least 4300㎡ for 12-class kindergarten. Hence the 12 activity rooms are stacked in three layers on the side of the site adjoining the school and joined by a wide corridor. The nap and music/sports rooms are separately inserted in the main structure in the form of small one- or two-storey boxes, with the rooftops of the boxes turned into multiple outdoor spaces. Meanwhile, part of the ground floor structure is left open as entrance, and the gaps between the building structures allows breeze coming from the river valley to brush through.

For the purpose to shorten the distance for children to reach the ground-level playground, more open, intimate spaces are provided on various floors, just like a vertically stacked cluster, children are able to play and interact in the interspaces between the building structures. Utilizing the rooftops at different elevations, the design creates multiple spaces for class activities on the second and third floor, giving rise to both a sense of territory and openness.

In order to create more possibilities for activity, the corridor is designed to be wide and irregular as a ‘street’, which resemble the roads connected with the neighboring village. All functional rooms of the kindergarten face the ‘street’, and their doors and windows have different ‘expressions’. The deep-set window boxes are shaped into ‘niches’ of different heights. Playing and interacting with one another daily in this miniature street, which, as time passes, imperceptibly becomes part of children’s growing experience.

There is four meters height difference in the site, high in the south and low in the north. The outdoor ground retains the original terrain. The northernmost music/sports room and the rising steps give form to the small outdoor theater, connecting by the playground platforms gradually rising toward the south with the play equipment area and the botanical garden, respectively. The highest point in the south eventually joins with the ‘street’ on the second floor, forming a spatial loop.

According to relevant safety regulations, the enclosure was alternated from void fence into solid perimeter wall, which enhances the sense of domain for the kindergarten, with children frolicking inside and farmers working the farmland outside. However, the inside-outside communication is temporarily blocked on the ground floor, making the ground-floor playground a pure internal space, while the terraces and corridors on the second and third floors reconnect the view to the outside. 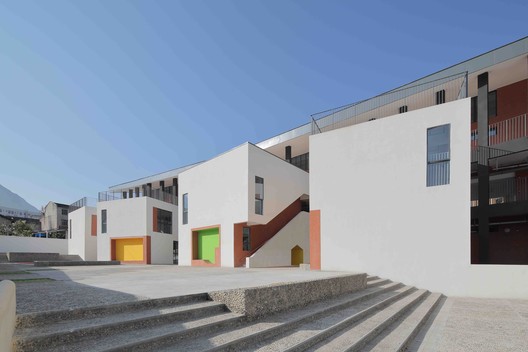