Save
Stood in Splendid Isolation, Questions Are Raised About Apple's Cupertino Campus
Share
Or
Copy

The "Spaceship" has landed and the dust, it appears, is starting to settle. In an article by Adam Rogers, which follows Wired's exclusive breakdown of the new Apple Campus in Cupertino, California, a convincing case is put forward against its design and wider masterplan. "You can’t understand a building without looking at what’s around it," Rogers argues – and most, including its architects, Foster+Partners, would surely be inclined to agree.

Whether you call it the Ring (too JRR Tolkien), the Death Star (too George Lucas), or the Spaceship (too Buckminster Fuller), something has alighted in Cupertino. And no one could possibly question the elegance of its design and architecture. This building is $5 billion and 2.8 million square feet of Steve Jobsian-Jony Ivesian-Norman Fosterian genius.

As a "high-end, suburban corporate headquarters," the typology the campus calls upon is not as innovative as the company's rhetoric might suggest. Referencing large US office projects of the 1950s and 60s, Rogers questions its long-term prospects, considers the potential of real local investment, and assesses the project's prime dilemma: at the moment, he suggests, "the Ring is mostly hidden behind artificial berms, like Space Mountain at Disneyland."

You can read the story in full on Wired. 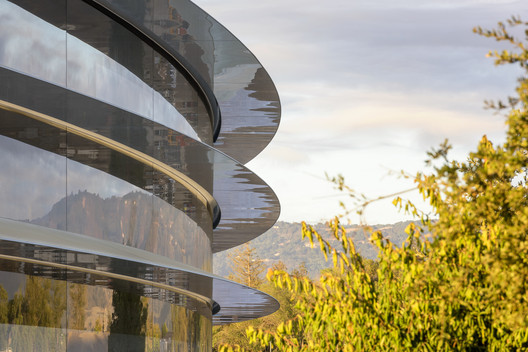