While many cities strive for a spectacular appearance at night, Zurich follows a modest strategy for nocturnal illumination. Numerous urban centers in the world are oversaturated in the evening, with individual buildings calling for attention through bright light, harsh contrasts, or colorful façade lighting. In contrast, the Zurich master plan for lighting has focused on an overall image of sensitive light levels with white light. But this nocturnal presence far from simple design, and is instead based on detailed urban studies and precise, customized projections, where technology is discretely hidden in favor of authentic culture. 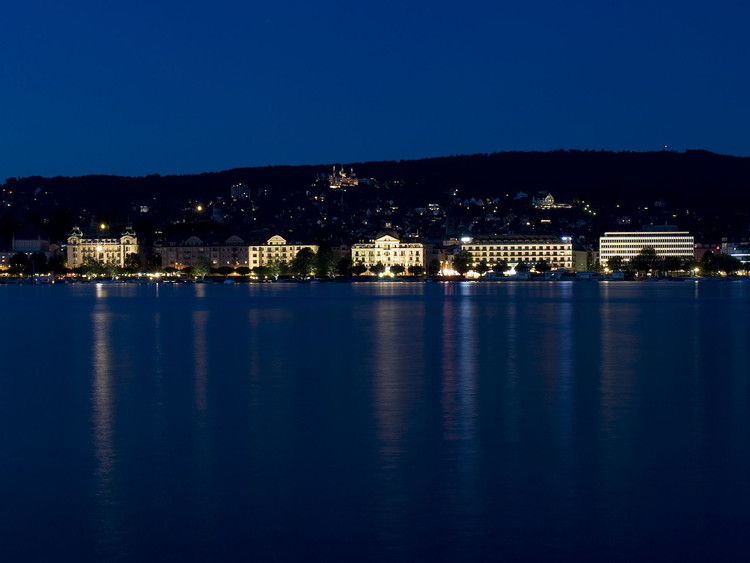 When the sun sets at Lake Zurich, a well-balanced nocturnal skyline appears. The equal presence of selected buildings shows clearly that harmony is the defining principle of this illuminated city. Well-adjusted light levels for the multifaceted public, corporate, and sacred elements create a human scale that is deeply linked to the local cultural identity. Often a competition for the brightest and most extravagant icons gives a city an impression of strength and power. However, this would definitely interfere with Zurich's alpine site and heritage. Instead, the city’s urban designers have enforced a respectful dialog of buildings during the night.

In terms of brightness, direction, and color, the façade lighting evokes associations to the harmony and highly-sensitive contrasts seen in the work of Renaissance artist Botticelli. By comparison, the extreme modeling with grazing light beams seen in many other cities are more like dramatic transformations of harsh Chiaroscuro paintings, reminiscent of the work of Caravaggio. Taking a path of understatement with modest illumination is neither an expression of indifference for regional tradition nor for tourism. It’s instead a self-conscious cultivation of a unique style, which breaks with the global trend for sensational communication. Hence, the buildings achieve a much more sensitive quality than they would with the use of universal floodlights, where power, glare and light pollution are typical. Zurich’s sensitive presence at night would not have been possible without a comprehensive masterplan for urban lighting which included an awareness of large-scale and regional identity.

The idea of urban master plans for lighting emerged in the 1960s with William M.C. Lam’s publication “Lighting of Cities.” But the implementation of such abstract concepts requires a long-term commitment, working with all of a city's diverse stakeholders and financial challenges. The city of Lyon became a leading example, successfully turning such an idea into reality after introducing its concept in 1989. Consequently, urban designers from Zurich traveled to Lyon for inspiration. They created a 10-year plan called “Plan Lumière Zurich,” which was launched in 2004. Alongside organizational issues and definitions of respective zones, the plan includes essential visual guidelines, which have influenced the current nocturnal image of Zurich. One of the most important aspects is that the design concept has focused on the illuminated space, and not on staging luminaires. Using the “less is more” notion has led to an emphasis of darkness, where instead of prescribing more light, the city favored different light. This approach also came with some positive side effects: the plan is respectful of environmental issues, and avoids light pollution and glare for pedestrians. Another strength of the Zurich masterplan lies in the emphasis of multifaceted qualities and identities.

In order to achieve these goals in illuminated spaces, the Zurich design team has identified representative architecture for the night. Accentuating landmarks like bridges, the city hall, and churches has discreetly enhanced the city's coherence and identity. Similarly, highlighting the entire stretch of the distinctive Limmat river would not seem appropriate for a “less is more” strategy. It would cause too much visual noise due to all the water reflections. Therefore the lighting focuses on bridges and individual buildings, but not the entire riverfront facade. Only the bridges’ side elements and sometimes their undersides receive light, emphasizing an intense spatial impression and creating dynamic water reflections. But their adjacent riverside walls are kept dark to intensify the contrast between the water and the bridge reflections. In a similar way the Lake Zurich waterfront plays with reserved lighting: Individual historical facades are illuminated as a background for the unilluminated trees which appear as silhouettes. Due to the white light used for all buildings, the inner city is united in a neutral color. Additionally, the avoidance of theatrical effects like grazing light with narrow beams has helped to create a calm luminous atmosphere with soft impressions of entire facades. Refined projection technology for several historical landmarks has also made it possible to illuminate only architectural surfaces, but no other areas.

The Zurich Opera House reveals the strength of this sophisticated facade projection technique excellently. The light levels grant the cultural institution a pleasant presence in the busy square, without drawing disproportionate attention to the opera. Thanks to the precise projections the pedestrians do not perceive any glare, because the light transmission at the base of the building has been minimized, with a soft graduation in brightness as you descend down to eye level. Even the concert visitors looking outside benefit from high visual comfort, due to the fact that the projection mask excludes the illumination from entering the windows. The mask has clear cut-offs between façade and windows. The designers also applied the same masking strategy to the roofline and the large sculptures in the corners, thus avoiding any spill light and light pollution.

Whereas luminaires are often aimed perpendicular to the façade – causing a flat impression with missing vertical shadow lines - the arrangement of the projectors at the Zurich Opera House is based on a diagonal layout. This trick creates more intense vertical shadow lines to emphasize the modeling of the historical façade. In order to cover the complete building, the lighting specialists from Opticalight used four projectors for the main building. The tower above the stage received four additional projectors to enhance the perception for a more distant view. For the pedestrians in front of the building the portico is clearly highlighted as an entrance façade with a higher brightness.

The unobtrusive night image of Zurich, which seduces citizens and tourists with minimalism, is a pleasant counterpoint to cities which strive for spectacular light concepts and branding. Zurich plays skillfully with the Swiss way of understatement. Their design team has rejected the temptations of concentrating on single buildings, extreme grazing light for exaggerated modeling on façades or using color and brightness to dominate the urban nightlife. Instead, Zurich has composed its urban light master plan with a vision that connects the entire ensemble of buildings and emanates an awareness of local identity. 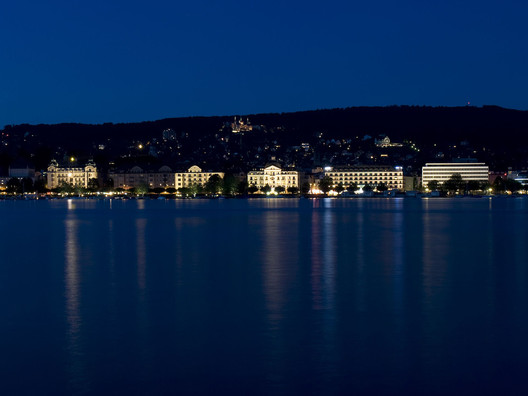