Over the following weeks we will be sharing a selection of unrealized student projects, alongside realized schemes by practices who explore representational techniques, in collaboration with KooZA/rch. The aim is "to explore the role of the architectural drawing as a tool for communication" and, in the process, provoke a conversation about the contemporary use, format, and role of drawing. 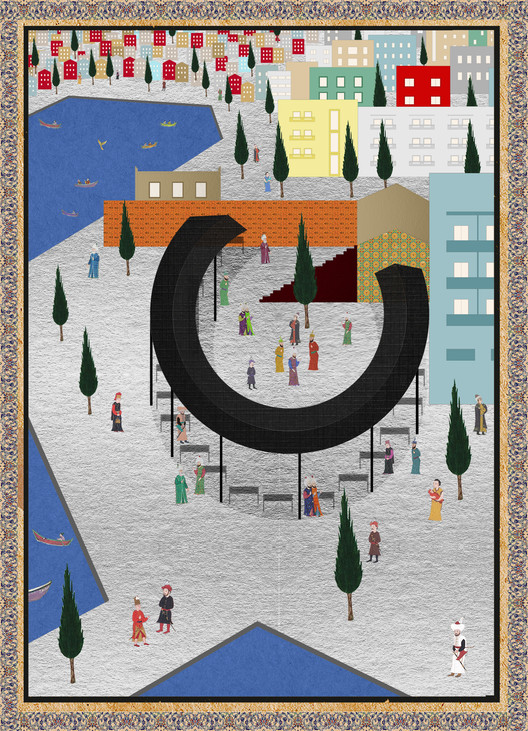 This project began with the notion of the memory of inhabiting through the Mediterranean Sea, and ended with the presentation of four architectural projects: a winery, an art storage space, a greenhouse, and a fish market.

Besides these four projects, the main drive of this diploma project consisted of making a long trip through the Mediterranean Sea. This trip was documented in the form of 210 drawings, collages, models, photographs, and videos.

We focused on the idea of traditional craftsmanship as a vehicle for memory and, more precisely, on the object of the carpet. W conducted research and eventually designed a carpet that was woven by Turkish crafts people. Its design represents these four architectural projects in the form of traditional symbols.

KooZA/rch: Why do you work with collage?

Deniz Basman and Louis Mounis: We have always worked with collage, but have always adapted this technique to the specificities of the project we were working on. For Mare Nostrum, we wanted to use a more personal technique—that was also linked to the narrative context behind our project—and we immediately thought of Ottoman miniatures. These are a form of representation that was used by nations around the Mediterranean Sea for a long period of time. Here, we aimed to reinterpret this style.

KA: You explore and acquire depth through flatness. How important is this to the project?

DB & LM: This flatness allowed us to focus on the framing, or the composition, of the visuals. "Flattening" the image allowed us to "cheat" when it came to the elements that we wanted to show; in other words, we were able to present a lot of context as well in tandem with architectural interventions. It was a way for us to visually affirm the imaginary elements that are also present in the narration of our projects. We wanted to detach ourselves from the super-realistic rendered images that we see everywhere, and rather tell tales and stories.

KA: What dictated the rectangular, framed format of the drawings?

DB & LM: This format is traditionally used in miniatures. The dimensions of the printed versions were also quite small, as it also is traditionally, which made them appear as postcards – objects that captured memories.

KA: Do you agree with the idea that "the medium is the message"?

DB & LM: We chose to use a lot of different mediums—such as a handwoven carpet, miniatures, three-dimensional printed models, photographs, and publications—because we saw them as narrative elements in a story that we wanted to tell. Using a carpet, for example, was a way for us to question the visual supports that we use in architecture – but also to reflect on the knowledge that needs to be accumulated in order to make a project.

Mare Nostrum is the diploma project of Deniz Basman and Louis Mounis at the Ecole Spéciale d’Architecture in Paris (2016). The jury included Sébastien Chabbert, Doris Von Drathen, Cédric Libert, Nicolas Dorval-Bory, Reza Azard, Jean-Benoît Vétillard, Samuel Jaubert de Beaujeu, and Charles Aubertin. It has been shared as part of a collaboration with KooZA/rch.

The Best Architecture Drawings of 2016

90 Designing and building a project is a challenge in itself. However, once the project is complete there are also challenges in expressing the project so that it can be understood by a new audience. This is especially true in digital media, where online readers don't necessarily spend the same time reading an article as in print media.

12 Offices that Use Collage to Create Architectural Atmospheres

"An image is a sight which has been recreated or reproduced. It is an appearance, or a set of appearances, which has been detached from the place and time in which it first made its appearance and preserved - for a few moments or a few centuries.

The representation of architecture is important in the absence of tangible space. Throughout a lifetime, even the most devoted, well-travelled design enthusiast will experience only a small percentage of architectural works with their own eyes. Consider that we exist in only one era of architectural history, and the percentage reduces even further.