Save
Public Pools or Private Houses - How Should Stockholm Use its Cliffs?
Share
Or
Copy

One of architecture’s most delightful anomalies is the diversity of solutions generated by any given site. From hypothetical university projects by architecture students to professional international design competition entries, the differing perspectives, stances, and experiences brought to rest on one site by several design teams can wield a bounty of contrasting ideas.

Recently, we reported on Nestinbox, a proposal by Swedish architecture firm Manofactory to attach a series of simple, functional houses to a cliff face in Stockholm, addressing the demands of increased populations and land prices in cities across the world. Now, the cliffs of Stockholm have been the subject of an entirely different, though just as evocative concept by Swedish firm UMA. Rather than private housing, UMA proposes the Stockholm Infinity Pool, a public pool 1km along the Sodermalm cliffs of Sweden’s capital. 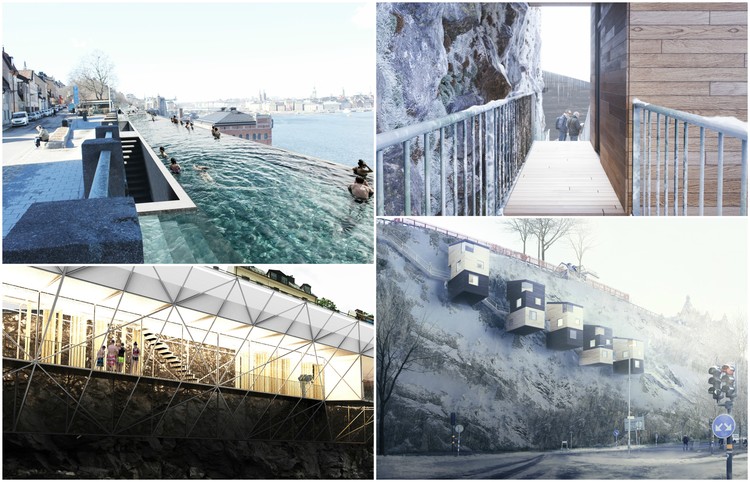 The Infinity Pool offers a 1km stretch of public space along the Sodermalm cliffs, hosting sweeping vistas of the magnificent Baltic inlet, where an archipelago slowly blends into the urban landscape of Stockholm. During Spring, Summer, and Autumn, a rooftop swimming pool is heated by waste heat, with water supplied from the Baltic Sea via a treatment facility. During colder winter months, the water freezes to create a surface ideal for ice skating.

The structure underneath the pool contains dressing rooms, showers, and saunas, also offering unobstructed views towards the Baltic Sea. Similar to Nestinbox, the load-bearing steel structure of the Infinity Pool is bolted to the bedrock of existing cliff faces, while a modular, concrete secondary structure can be mounted and secured to the steel structure by crane.

Nestinbox and the Infinity Pool address identical site conditions from entirely different standpoints. Nestinbox sees the cliffs of Stockholm as an untapped resource for addressing a global growing demand for housing, creating a residential community above ground level. By contrast, UMA sees the cliffs as an opportunity to invest in inclusive, attractive public space, enhancing the touristic appeal of Stockholm as a city of creative innovation.

For such an expansive cliff, perhaps there is room for both. Who wouldn't be excited by the prospect of strolling along a cliff-face from their very own Nestinbox for a morning swim amidst unrivaled views of Stockholm?

Forget Treehouses - Cliffhouses are the Future

In major cities around the world, buildable land is at a premium. At the same time, a continued trend of urban migration has led to a shortage of houses, inspiring a wealth of innovative solutions from architects and designers. 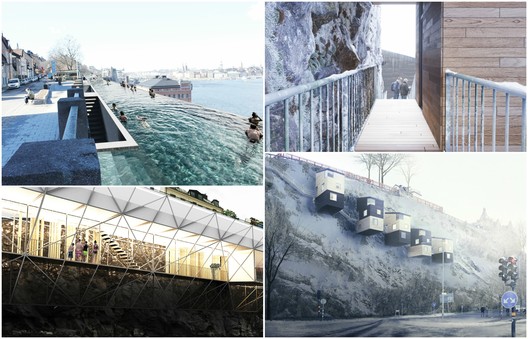