The construction of housing projects like Pruitt-Igoe was a direct response to the evolution of urban populations taking place in the years after World War II. The rapid growth of American cities before 1920 had slowed dramatically, and even reversed in some cities – including St. Louis, Missouri. More alarmingly for urban experts, those residents flowing out of the cities into the suburbs were largely the wealthier classes, depriving businesses of their clientele and the civic governments of their tax revenue. This mass exodus, they believed, left a vacuum which was gradually filled with slums – the dreaded “blight” which could only be cured by being expunged. With the Housing Act of 1949, $1 billion (over $10 billion in 2017) was set aside to provide cities with loans for slum clearance and redevelopment, sparking urban renewal projects across the United States.[1]

In 1950, St. Louis was preparing to create 5800 units of affordable housing with the federal funds provided by the Housing Act. City engineer Harold Bartholomew and mayor Joseph Darst, aspiring for utmost efficiency, decided to satisfy almost half of this goal with a single, massive complex. Initially planned in the twilight of the United States’ Jim Crow segregation laws, the project was to be divided along racial lines: black residents would live in the Wendell Olliver Pruitt homes, while their white counterparts would occupy the James Igoe apartments. However, as the project was not completed until 1954—after the ruling in the Supreme Court case Brown vs. Board of Education made “separate but equal” segregation illegal in the United States—it was integrated into a single complex, Pruitt-Igoe.[2]

This single, enormous project began with the clearing of DeSoto-Carr, considered one of the least habitable neighborhoods in St. Louis.[3] In its place was to be built a collection of 33 modular 11-story apartment towers designed by Minoru Yamasaki of Hellmuth, Yamasaki, and Leinweber. Occupying 57 acres of land, the towers provided accommodation for up to 10,000 residents in 2,870 apartment units. While the composition of residential high-rises towering over manicured plazas drew heavy inspiration from Le Corbusier’s Ville Radieuse concept, the buildings themselves more closely resemble his later Unité d’Habitation projects: long, narrow slab structures with window galleries running 85 feet along their length. One notable feature designed to improve both functional and cost efficiency were the skip-stop elevators, which only opened onto every third floor. Staircases then provided access to the floors immediately above and below. The combination of the two was intended to replicate community life on the sidewalks in a high-rise setting, where children and adults alike could gather in sheltered safety.[4,5]

Even before it was completed, Pruitt-Igoe was not built as intended. Yamasaki had proposed a number of design elements which were never built: low-rise units dispersed among their larger counterparts, playgrounds, ground-floor restrooms, and additional landscaping were all deemed too expensive by the Federal Housing Administration and cut from the project. It was this constant emphasis on economy that dictated features like the skip-stop elevators, and which only hinted at the troubled times ahead.[6]

Although Pruitt-Igoe was by no means an award-winning project even at the time of its opening, its design was nonetheless lauded by publications like the Architectural Forum, which had named it the Best High Apartment in 1951. (In 1965, this same magazine reexamined Pruitt-Igoe and reversed its stance, declaring the project a failure.) Unfortunately, while federal policy had struck down legal segregation, the attitudes of many Americans—including many of those living in St. Louis—had yet to catch up. The integration of the Pruitt and Igoe apartments resulted in most of the white residents leaving en masse, along with those black residents who could afford single-family dwellings elsewhere. The only tenants left were those who literally could not afford to go anywhere else.[7]

Pruitt-Igoe’s fall from grace began almost immediately. At its peak occupancy in 1957, 9% of the complex remained vacant; by 1960, this figure climbed to 16%, and it later skyrocketed to 65% by 1970. Whereas the federal government had provided the funds to build Pruitt-Igoe, its maintenance was to be supported directly by the tenants’ rent. With the apartments occupied almost exclusively by a dwindling number of low-income residents, a number of whom subsisted on welfare, there was little money to keep up the 33 towers, and they subsequently fell into disrepair. The situation became a vicious cycle: poor maintenance drove out more tenants, bleeding out the already-strained budget and allowing the buildings to become more and more derelict, repelling even more tenants.[8,9]

It was in this atmosphere that Pruitt-Igoe became a hotbed for criminal activity. The galleries and staircases meant to provide safe community spaces instead became the dominion of gangs; residents nicknamed the galleries “gauntlets,” treacherous passages in which they were harassed or even assaulted on their way home. The complex’s reputation soured so dramatically that some maintenance and delivery workers refused to enter. By 1958, the St. Louis Housing Authority petitioned the federal government for funding to renovate Pruitt-Igoe; although some of Yamasaki’s originally-intended amenities were subsequently installed in 1965, the renovation failed to address the deeper social and fiscal issues which had caused Pruitt-Igoe’s prompt nosedive into squalor.[10]

In 1972, the federal government finally determined that Pruitt-Igoe was beyond rescue. Over the next few years, the 33 towers were demolished by means of dynamite implosions, leaving behind a vast urban wasteland in the fabric of St. Louis which, to this day, has yet to be filled. Only 600 residents had been left when the order came, a far cry from the 10,000 originally expected to fill the complex. The fall of Pruitt-Igoe came to be seen as symbolic: more than the failure of one housing project, and more than the failure of the such projects in general, it was touted as the failure of Modernist architecture itself. Architecture critic Charles Jencks famously declared, “Modern architecture died in St. Louis, Missouri on July 15, 1972, at 3.32 pm.”[11] In an interview for Architectural Review, Minoru Yamasaki said simply of Pruitt-Igoe: “It’s a project I wish I hadn’t done.”[12]

In the end, it is as unfair to place sole blame for Pruitt-Igoe’s failure on its architectural design as it would be to completely exonerate it. It took the combination of unfortunate design choices, deep-seated racism, and poorly-structure housing policy to produce the twenty-year fiasco that was Pruitt-Igoe. A forest has since grown on the land where the 33 towers once stood, disguising the physical rift they left after their destruction in the 1970’s. Their legacy is not so easily disguised, however, and whomever one chooses to blame for its eventual downfall, the name Pruitt-Igoe remains synonymous with the failure of an entire design philosophy. 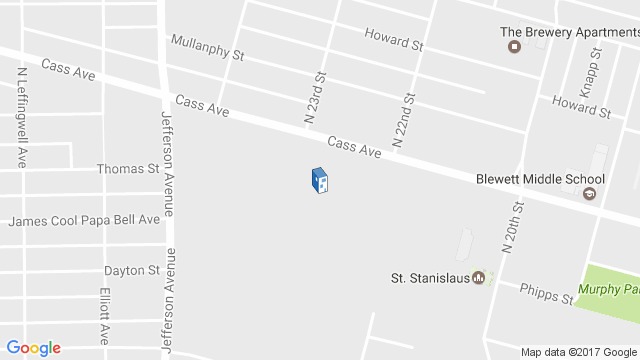 Location to be used only as a reference. It could indicate city/country but not exact address.
Share
Or
Copy
About this office
Minoru Yamasaki Associates
Office
••• 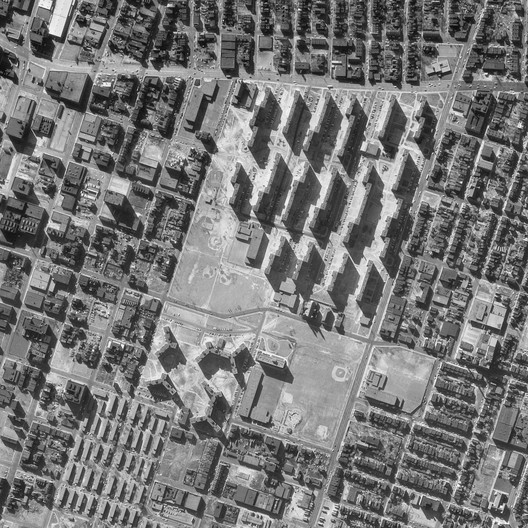