Save
Could Electric Cars Turn Gas Stations Into the Community Hubs of the Future?
Share
Or
Copy

One general trend in today's Information Age involves the absolute transmutation of downtime into productivity or engagement of any kind, however meaningless. We hear it all the time: we have lost our ability to be still. However, as a team at Ennead Lab has observed, some of the same technologies that are causing this shift in routine also have the potential to open new, empty pockets of time in our daily lives, and affect the built spaces with which we interact.

Tasked with designing an electric car charging station for a development in Shanghai, Ennead realized that the five hours required to fill up a single standard charge necessitate a place for customers to wait. In an article on Metropolis Magazine, they show that the promise of transportation-less people to stick around in one place for such a period of time opens up a host of possibilities for what could fill the latency period; the Shanghai project, however, focuses on the opportunity to create a civic space. The team has imagined the modern "gas station" as a vertical charging tower that calls upon the functionality of urban parking elevators in the 20th century, this time clad in reflective silver to serve as a beacon for customers in search of a charge. Rather than standalone charge-park towers, the projects are integrated into a system that encourages patrons to walk to neighboring zones to eat, shop, and socialize while they wait.

To learn more about the potential for civic programming in gas stations, read the original article by Andrew Burdick and Kyle Graham here. 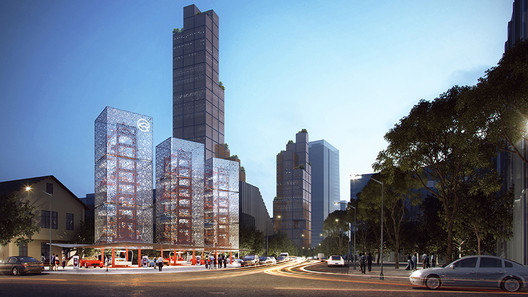