Save
4 Important Things to Consider When Designing Streets For People, Not Just Cars
Share
Or
Copy

Go to any medieval European city and you will see what streets looked like before the advent of the car: lovely, small narrow lanes, intimate, and undisputedly human-scale. We have very few cities in the US where you can find streets like this. For the most part what you see is streets that have been designed with the car in mind—at a large scale for a fast speed. In my native San Francisco, we are making the streets safer for walking and biking by widening sidewalks, turning car lanes into bike lanes, and slowing down the cars. We are working with the streets we have; a typical San Francisco street is anywhere from 60 to 80 feet (18 to 24 meters) wide, as compared with a medieval, pre-car street which is more like 10 to 20 feet (3 to 6 meters) wide.

As an urban designer, I work on lots of projects where we take large parcels of land and subdivide them into blocks by introducing new streets. These new streets are a rare opportunity to take a fresh look at the kinds of car-oriented roads that we are used to, and instead try to design streets that prioritize the safety and comfort of pedestrians. These projects give us a chance to design streets that are just for people. Imagine that we made these people-only streets into narrow, medieval-style lanes that are intimate and human-scaled. But even as we try to design streets that might not ever see a single car, we find that the modern street design has become so much more than just places for walking or driving. There are therefore a number of things for socially-minded designers to consider, beyond the commonly talked about pedestrian-car dichotomy.

First, the street is where utilities go

Ask any civil engineer and they will tell you a street is a highly engineered easement filled with a variety of pipes, connectors, backflow preventers, and other feats of modern science bringing us water, energy, and communication. Streets provide a linear system for organizing this network of utilities both horizontally (there are required distances between different kinds of utilities) and vertically (water—in all its forms—needs to flow downhill, even in seemingly flat streets). What is more, there are established, well-tested conventions for how to design these systems so that they operate every day without us even noticing. Our reimagined, car-less street, in whatever form it takes, needs to manage the way we are connected into this vascular, subterranean system.

With new technologies, we are finding efficient ways to manage some of these utilities with less reliance on the grid. For example, there are now a handful of buildings that treat and reuse their own sewage. This “blackwater” is treated and the liquids are used for flushing and irrigation, while the solids are used by bio-digesters for energy to help power buildings. We can go even further and connect a few of these high performing buildings together into eco-districts, and find that the amount of utilities that we need to accommodate in the streets might eventually decrease.

Second, the street is a drainage system

Get your civil engineer together with your landscape architect and you will begin to understand the demands on streets for handling stormwater. In fact, you will learn that from their perspective, the principle purpose of a curb is not to separate pedestrians safely from cars, but to control flooding. Curb heights are set relative to the slope of a street and the size of the storm drain to prevent flooded sidewalks and buildings.

However, in some ways this is a self-made challenge. An impermeable street and gutter actually stops water from soaking into the ground and forces it to move faster and at greater volumes across the surface. We know that permeable paving works much better to alleviate flooding, and reducing areas of paved surfaces and increasing planted areas is even more effective. Many cities are retrofitting their streets with both permeable surfaces and raingardens to help alleviate this problem. By designing our streets to handle water in a more holistic way, with natural drainage and infiltration, we can start to peel away the curbs and see signs of plant life moving back into our new street section.

Which leads to this next point: a street is an ecosystem

In a city with an urban grid, streets take up as much as 30 percent of the total area of the city, which represents a significant amount of land in the public realm. So it should be no surprise that streets end up being where we find much of the biomass that is found in cities, in the form of street trees and sidewalk plantings. Beautiful old streets mostly have one thing in common: beautiful old trees. Large, healthy, mature trees can make for amazingly lovable streets, even if the roads and sidewalks are nothing special. Case in point: Saint Charles Avenue in New Orleans has some of the most impressive potholes and impassable sidewalks in the city, but its arching canopy of centuries-old oak and fig trees firmly cements it into visitors’ memories as one of the most beautiful streets in the city.

But trees can also perform in ways beyond aesthetics, to act as habitat for wildlife in the city. Two great examples of this are the Pollinator Pathway in Seattle and the tiger swallowtail butterfly rookery along San Francisco’s Market Street. Landscape architects typically select street trees for their durability, height, and canopy size, but increasingly they are selecting for their contribution to a larger ecosystem. Given that street trees follow the connected network of streets, by default they can create a rich, connected network for the fauna that rely on them as well, linking from park to park across a city.

The good news is that street trees are usually selected, installed, and maintained by a single city agency, which means that adding ecological performance to the species selection criteria could be quite an effective way to implement such wildlife corridors on a larger scale, and converting streets into ecological corridors benefiting all critters... humans included.

Finally, of course, a street is a public right of way

In other words, a street is publicly owned land, which the public has the right to occupy. In a democratic country, the streets are a place where people come together to be seen as a group, to stand up and be counted. We are seeing the importance of this fact in cities all over the country (indeed, the world) where people are once more taking to the streets to find their voice; New York Mayor Bill De Blasio recently said that protest is one of the important functions of New York City’s streets. Even though at times this may conflict with other functions, such as moving traffic easily, it remains a critical and fundamental purpose of a city’s streets.

What is more, in every country, everywhere, the streets are the place where public life is lived every day. From Algiers to Zurich, streets are filled with people doing everyday things like chatting with their neighbors, hanging laundry, watering flowers, buying food, and socializing their children. If we are to rethink the idea of the street, we would need to find a way to ensure this vitality of public life has space, in all its forms, and in all its public-ness.

When drawing a street on a plan, you start with a centerline and offset it on two sides. It is quite literally a line connecting two places with a certain width. This width is almost always determined by an engineer who is trying to match an algorithm for how many lanes are needed for the cars that will drive down this street, and how many utilities will need to comfortably fit here. Instead, we should think about streets and all their various uses—as places for gathering, finding our way, living more healthfully, with nature, and with each other... and build from there.

Kristen Hall is a senior urban designer and planner at Perkins+Will in San Francisco. She specializes in complex urban infill projects. 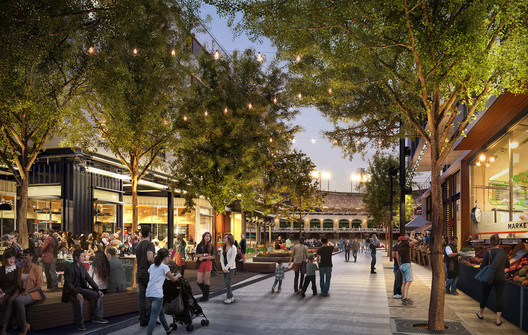