Marrying the great expanses of the American west with a series of mirrored faces, MIRAGE is an installation situated in the Southern California desert and the work of Doug Aitken, an American artist, and filmmaker. An experimental adaptation of the traditional suburban ranch-style house, the sculpture hones in on architecture’s relationship with its landscape, manifesting itself as a life-sized kaleidoscope.

The California Ranch Style house was first designed by a small collective of architects in the 1920s and 30s, inspired by the spatial fluidity of Frank Lloyd Wright’s work and melded with the local single storey homes that belonged to ranchers. Following the Second World War, the simplicity of this housing typology resulted in its quick rise in popularity, adopted by commercial builders to match the rapid urbanization of the American countryside. 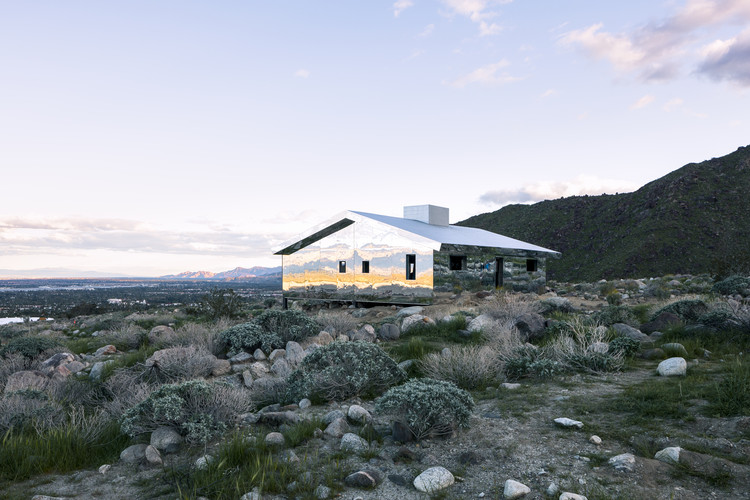 “MIRAGE is reconfigured as an architectural idea: the seemingly generic suburban home now devoid of a narrative, its inhabitants, their possession,” states the Doug Aitken Workshop. “This minimal structure now functions entirely in response to the landscape around it. The doors, windows, and openings have been removed to create a fluid relationship with the surrounding environment.”

With this in mind, the installation adopts the recognizable form of the ranch-style home and uses the strictly reflective surfaces to transform the structure into a framing device that concurrently absorbs and reflects its environment. Its transitional location lies between the San Jacinto Mountains and the Coachella valley while overlooking a developed site in the distance.

“Subject and object, interior and exterior, the psychological and physical; each of these oppositional forces are held in constant tension, yet allowed to shift and transform in the ever-changing desertscape”, said the design team.

Given its unique character and location, the space can be experienced at any moment in time, providing different distortions and reflections for every viewing, be it under the darkness of the night sky or the endless expanses of sunlit desert.

Designed by Doug Aitken, MIRAGE is one feature of the Desert X contemporary art exhibition, which runs from February 25 to October 31. Aitken’s work has been showcased at renowned international locations, including the Museum of Modern Art, Vienna Secession, and the Serpentine Gallery in London, among others. He is also a former winner of the Venice Biennale’s International Prize in 1999.

More on this reflective installation, including directions for visiting the site, can be found here.