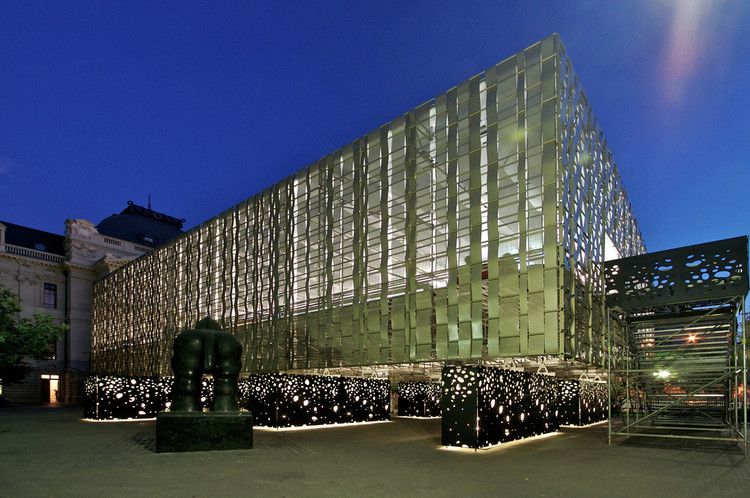 Text description provided by the architects. The proposal for the installation of the XVI Architecture Biennale starts with the selection of the venue: The Contemporary Art Museum at the Forestal Park. Even if the building wasn´t big enough to host the Biennale, it had plenty of virtues for the event: a centric location with good accessibility, immersed on the most important park in Santiago, but mostly because it has one of the most significant variables for this installation: the possibility to extend the Biennale to a wider audience, not only to the architects. Opening the exhibition on the specific context "Towards an architecture that cares about our planet", results in an exposure of our affairs to the public, on an open plaza tied to a space on where each part of the exhibition allows for an open exchange of information.

The Biennale´s exhibitions didn´t fit inside the Museum, which we already knew when choosing the venue. The lack of space at the interior of the museum gave us the opportunity, on one side, to take a good portion of the exhibition to the outside -the one in hands of the ones with more time and energy to generate knowledge through experimentation, the students- while activating the plaza in front of the museum, which has been the stage for public events linked to performing arts. The "Juggler´s Square", is proposed as a public platform over which a temporal 400sqm pavilion will be built, with similar proportions to the inner space of the Museum, hosting the architecture schools exhibition. On the other side, it liberates from exhibitions this inner space, turning it into an open auditorium for the international conferences.

The pavilion sticks to the call of the Biennale. From the beginning and to the end of the design, we chase the idea of working with reusable or already reused elements, from the pavilion structure and it´s skin, to the interior elements of the exhibition inside of the museum. On the first, structured by scaffoldings, it´s treated like an open plan cage over the plaza, liberating the maximum public space for activities related to the Biennale. The outer skin of the pavilion is a woven fabric with refurbished aluminum strip provided by Hunter Douglas, a material that can be recycled, but given that the amount of energy required for the process is so high, it´s better for the environment to discard it. Hunter Douglas opens then the possibility of reusing this material, saving the required energy needed for recycling, which resulted on making this a commercial product. Also, the pavilion will use a carpet provided by InterfaceFlor, which uses an 80% of recycled fabrics. Once the Biennale is over, 100% of the elements used on the pavilion will be reused.

The exhibitions at the interior of the museum have been placed on the main rooms. The buildings will be shown on a 160cm tall wall at the center of each room, without touching the walls of the building. The wall, composed of solid blocks of corrugated cardboard of 40cm by side, extrudes sittings from these modules, leaving openings where the scale models and exhibition boards are placed using the same module: 40x40, 40x80 and 40x120 centimeters.

The corrugated cardboard blocks aren´t glued together, working by their weight alone, which allows for the wall to be dismounted and then put together again at another location. At the same time, these modules allow for a smaller configuration of the exhibition, which will be sent to other cities before being recycled.

The international conferences will be given at the central patio of the museum, a space with wooden cubes made out of conglomerated timber by Masisa, turning this space on the main auditorium of the Biennale. During the day, these elements will be part of an encounter plaza, surrounded by a photo exhibition with works of emergent latin american architects. The space of this auditorium is confined by drywall panels used by the sponsors for exhibition to the circulation spaces of the museum. Once again, 100% of the materials used at the interior of the museum will be recycled when the Biennale is over. 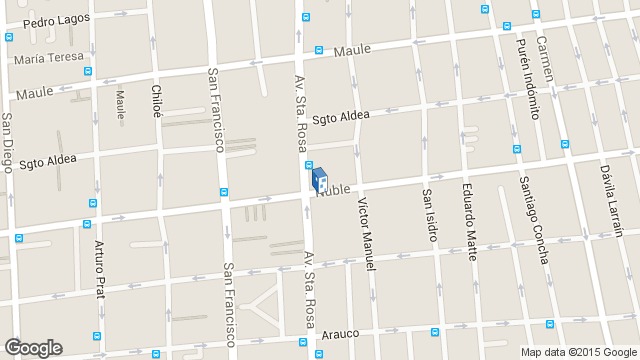