Five European projects have been selected as finalists for the 2017 EU Prize for Contemporary Architecture - Mies van der Rohe Award. Chosen from a shortlist of 40 projects, the five finalists were lauded by the jury for their ability to “respond to the concerns of today’s European society.”

“Our instincts could be summed up by the words of Peter Smithson: ‘things need to be ordinary and heroic at the same time,’” said Jury Chairman Stephen Bates. “We were looking for an ordinariness whose understated lyricism is full of potential’.”

Through April, the jury members will visit each finalist project to evaluate the buildings firsthand and to see how they are used by the public. The Prize Winner will be announced in Brussels on May 16.

“Issues such as collective housing, the complexity of the European city – both contemporary and historical – and the ability of architecture to create symbolic spaces provide us with the opportunity to extend the debate on the finalist works beyond architectural circuits, because they respond to the concerns of today’s European society.”

Malgorzata Omilanowska, art historian, former Minister of Culture in Poland and member of the Jury, added: “social housing, memory and the problem of context and new constructions in the old city centres have proven to be important to us as a Jury. The finalist works show the problematic of our time; what has happened in the last year reveals the really deep problem of populism and the lack of memory. These 5 projects show the problem that we face as citizens, not only as architecture specialists, but as members of today’s society.”

New for this year’s awards program, the 5 finalists and the Emerging Architect award buildings will be opened to the public between May 20th and 28th to meet the architects and Prize organizers and get a chance to learn more about the projects.

Established in 1987 by the European Union, the European Commission, the European Parliament and the Fundació Mies van der Rohe – Barcelona, the 60.000€ Mies Van der Rohe award is one of the most prestigious and important awards for European architecture. The prize is awarded biennially to works that have been completed in the past two years. Previous winners have included the Barozzi / Veiga’s Philharmonic Hall Szczecin (2015); the Harpa Concert Hall and Conference Centre in Reykjavik (2013), designed by the Danish architectural firm Henning Larsen in collaboration with the Icelandic practice Batteríið and the artist Olafur Elíasson; and the Neues Museum in Berlin (2011), designed by David Chipperfield Architects and Julian Harrap.

Learn more about the Prize here. 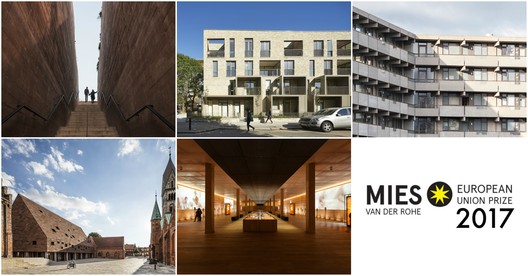