Cleveland’s civic center is one of the most completely realized examples of the City Beautiful movement in U.S. city planning that flourished during the late 1800s. In 1903, architect/planner Daniel Burnham designed the Mall—a large public park flanked by major civic and government buildings on a bluff above Lake Erie. One hundred years later, the Cleveland Civic Core project continues Burnham’s vision while reimagining it for the 21st century, weaving together two public assembly facilities with civic green space to catalyze a dramatic revitalization of the downtown core. 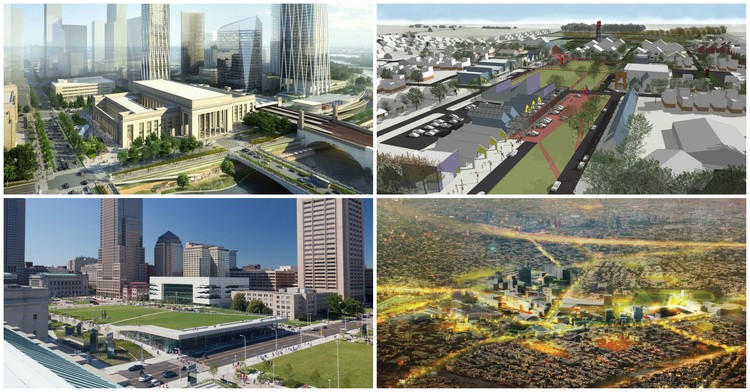 The master plan for Philadelphia’s 30th Street Station District, created through the partnership of Amtrak, Brandywine Realty Trust, Drexel University, PennDOT, and SEPTA, and developed by SOM in association with WSP | Parsons Brinckerhoff, OLIN, and HR&A Advisors, will realize the long-awaited vision of a mixed-use urban district centered on a vibrant transportation hub. The plan, determined through a broad and inclusive public process, creates a sweeping transformation of the historic station and the 88-acre rail yard it anchors to build a new neighborhood above the district’s complex transportation infrastructure.

The town of Vilonia was leveled by an EF-4 tornado that killed 11 people in 2014.  The reinvention plan, unanimously adopted by the city council in 2015, is built upon a new strategy to employ underground safe rooms as a municipal planning format that can be transferred to other towns susceptible to tornados. To deal with these issues, the plan calls for the implementation of a “safescape” comprising a modulated system of shipping containers buried underground. By combining the network of safe rooms with a park system and new town loop, residents and visitors will be within a five-minute walk of safety during a tornado.

Regeneracion: A vision for the campus and district of the Tecnologico de Monterrey, Mexico / Sasaki Associates

“Regeneración”, the new Framework Plan for Monterrey Tec’s flagship campus rethinks the institution’s relationship to its complex urban setting to make a new kind of contribution to the city, the country, and the very nature of higher education in Mexico. Inter-disciplinary learning, mixed-use R&D clusters and cultural facilities are carefully connected to the district by a strong public realm, reinforcing synergies with surrounding neighborhoods. The plan reflects a new pedagogical vision, and sets the stage for continued expansion of the Tec’s influence as an engine of innovation and development in Mexico.

A shared-use road-salt transshipment facility and recreation and habitat landscape, Rock Chapel Marine is a new model for the integration of active industrial uses with public access on the working waterfront. Through design, the project interweaves industrial operations with everyday life, making use of the seasonal nature of the salt industry to expand public recreation during the summertime and then return to industrial use in the winter. Structures from the site’s former use as an oil terminal are re-appropriated throughout, creating new forms of public engagement with the working waterfront.

More information on this year’s awards can be found here.

News and project descriptions via AIA.