To the contemporary observer, the flowing lines and naturalistic ornamentation of Art Nouveau do not appear particularly radical. To some, Art Nouveau may even seem to be the dying gasp of 19th Century Classicism just before the unmistakably modern Art Deco and International Styles supplanted it as the design modes of choice. The Hôtel van Eetvelde, designed in 1897 by Victor Horta—the architect considered to be the father of Art Nouveau—suggests a different story. With its innovative spatial strategy and expressive use of new industrial materials, the Hôtel van Eetvelde is a testament to the novelty of the “New Art.” 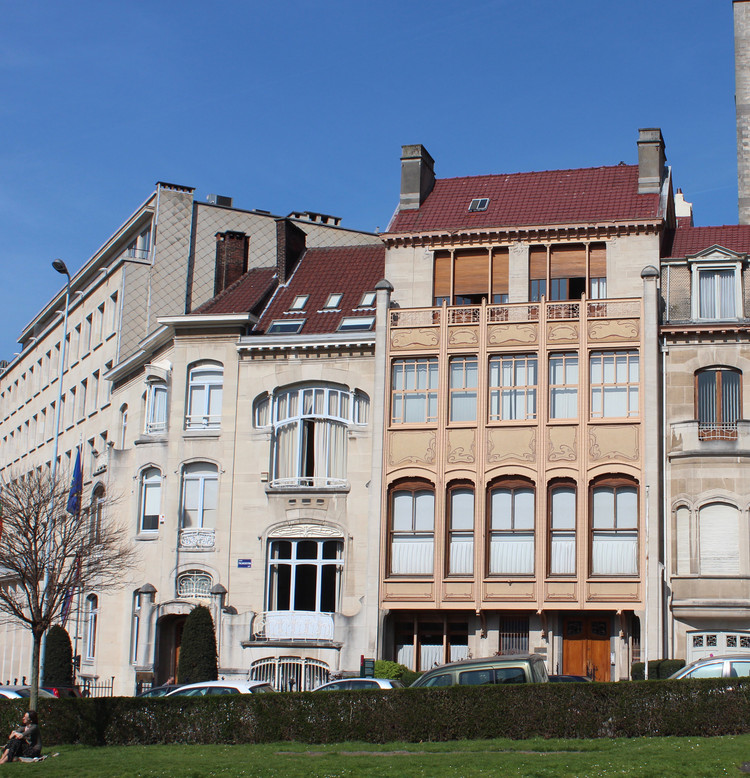 On December 17, 1865, Leopold II ascended the throne and became King of the Belgians. From the outset of his reign Leopold pursued grand plans for the revitalization of the Belgian capital, Brussels. Backed by the power (and occasional funds) of the crown, elegant avenues, manicured parks, and august museums began to proliferate throughout the city. It was a transformation not unlike that which Baron Haussmann and Napoleon III had effected in Paris in the preceding two decades, albeit with one key distinction: while Paris became defined by aesthetically uniform, monolithic apartment blocks, the burgeoning middle class in Brussels instead commissioned private houses, each designed to expressively stand out from its neighbors. The result, while no less impressive than the orderly Parisian façades, was one of extreme variegation.[1]

It was in the midst of this development boom that Edmond van Eetvelde, the Belgian secretary of the Congo Free State—the Belgian colony in central Africa which quickly became infamous for its human rights abuses—commissioned Victor Horta to design his new townhouse. The programmatic requirements were, according to Van Eetvelde, “like those of everybody else. I have to entertain so I will need a large lounge, at least, and a dining-room as large as you can manage.”[2] This was not as straightforward a directive as Van Eetvelde seemed to believe. Despite their exterior diversity, townhouses in Brussels tended toward virtually identical interior layouts; as the vast majority had deep, narrow footprints, the inability to take advantage of natural lighting anywhere other than the front and rear walls of the house made deviation untenable. It fell to Horta to find a way to break from the established modus operandi and satisfy his client’s dream.[3]

It was in solving this dilemma that Horta would create the grand architectural gesture for which the Hôtel van Eetvelde would come to be known. From a comparatively modest entryway, visitors proceed down a small corridor and ascend into a double-height octagonal atrium. This atrium, aside from acting as a point of entry and containing the house’s main stairway, also serves as an ideal venue in which to receive guests – whether just a few casual visitors or a throng gathered for an important occasion. A ring of slender iron columns rises around periphery of the room, culminating in a dome of brilliant stained glass.[4,5]

The light streaming in through the glazed ceiling onto iron pillars is reminiscent of a conservatory, an effect Horta reinforced with botanically-inspired ornamentation. Patterns in the stained glass give the impression that the top of each column fans out like a palm frond; the sinuous curves of the ironwork in the banisters are ferrous analogues for creeping vines.[6] As Belgium was an industrialized nation by the 1890s, the iron and steel it produced had already found use in many Brusselian houses as a means of widening window lintels. It was not until the advent of Art Nouveau, however, that it would find such open, sophisticated expression in architectural design – a hint of the Modernism underlying a style which was evidently preoccupied with imitating the natural world.[7]

Branching off of the atrium was a series of spaces organized in a manner that echoed the ideals of 19th Century urbanism. Much like the city surrounding it, the Hôtel van Eetvelde was a mélange of picturesque, winding circulation routes and vistas onto the important spaces of the house. From the entrance at ground level to the reception area on the floor above, visitors must change direction six times, following the perimeter of the atrium as they ascend. The final course change offers an oblique view of the reception area, a common thread in Horta’s circulatory scheme; few paths of travel in the house lead to a frontal view of walls or spaces.[8]

With its profusion of false foliage, wrought of iron and captured in stained glass, the Hôtel van Eetvelde is not an obvious expression of Modernist leanings. Its luxurious, curvilinear ornamentation is a stark contrast to the functionalism of buildings like Le Corbusier’s Villa Savoye, and even to the more streamlined Art Deco luxe of examples like the Chrysler Building; dependant as it was on industrial materials, it was highly individualistic and not easily adapted for widespread use. However, nothing like Art Nouveau had been seen before the late 19th Century. Like Art Deco and the later Modernism, it was a style born out of a rejection of the traditions that had been built up in Western architectural practice since the time of the Renaissance. That its inspiration came from nature does not change the fact that Art Nouveau, however short-lived its heyday, was the first step in the architectural direction that would ultimately be taken after the First World War.[9]

Over a century has passed since Horta completed the Hôtel van Eetvelde in 1900, and yet despite the passage of time and its conversion to an office building, the house has been left almost completely unaltered. In 2000, the building was named a UNESCO World Heritage Site, along with three of Horta’s most notable Brusselian projects: the Hôtel Tassel, the Hôtel Solvay, and his own home.[10] With this recognition and the protection it affords, this particular Hôtel will be preserved for the benefit of future generations who, rather than marveling at the novelty its interiors once possessed, will admire the lasting elegance of its graceful, unique design.