This week London's Science Museum will open The Winton Gallery, a new space dedicated to the study and exploration of mathematics, designed by Zaha Hadid Architects. While this is the practice's first permanent public museum exhibition, it also represents the first UK project to open since the death of its eponymous founder and director.

Inspired by the Handley Page aircraft, the design of the space was conceived through observing equations of airflow used in the aviation industry. The layout and lines of the gallery therefore represents the movement of air that would have flowed around this historic aircraft in flight – a metaphor which extends from the positioning of the showcases and benches to the three-dimensional curved surfaces of the central pod structure.

Positioned at the center of the gallery is the Handley Page ‘Gugnunc’ aeroplane, built in 1929 for a competition to construct an aircraft which could operate safely. According to the Science Museum, "ground-breaking aerodynamic research influenced the wing design of this experimental aeroplane, helping to shift public opinion about the safety of flying and to secure the future of the aviation industry." It therefore encapsulates the gallery’s overarching theme, illustrating how mathematical practice has helped solve real-world problems and in this instance paved the way for the safe passenger flights that we rely on today.

According to the architects, "our design for the Gallery responds to the ambition of David Rooney and his team to present mathematics not as an academic concept, but as a practice that influences technology and enables the environment around us to be transformed. Mathematics and its tools have always played a central role in the evolution of the human understanding of nature and the constructed world: for example, Sir Isaac Newton’s methods to derive the laws of gravitation, Henri Poincaré’s extension of the Cartesian geometries to the planetary system and Lord Kelvin’s use of the mathematical technique of curve-fitting to predict the tides." 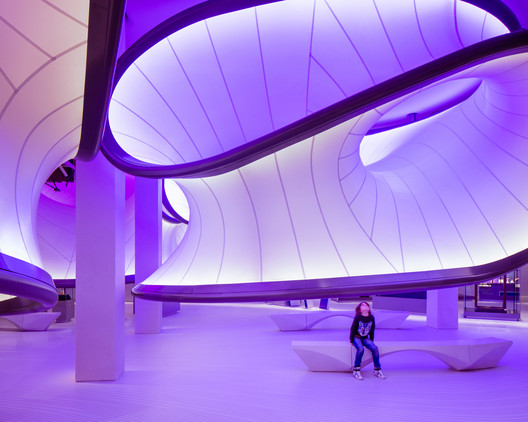