The end of the War of 1812 left the young United States of America awash with nationalist fervor. In the following years, the world’s first modern republic experienced unprecedented growth and prosperity; it was not without reason that the period came to be known as the “Era of Good Feelings.”[1] It was into this epoch of unbridled national pride that Thomas Jefferson, one of the country’s founding fathers and its third President, introduced his master plan for the University of Virginia: an architectural manifestation of the Enlightenment and republican ideals he had helped cultivate. 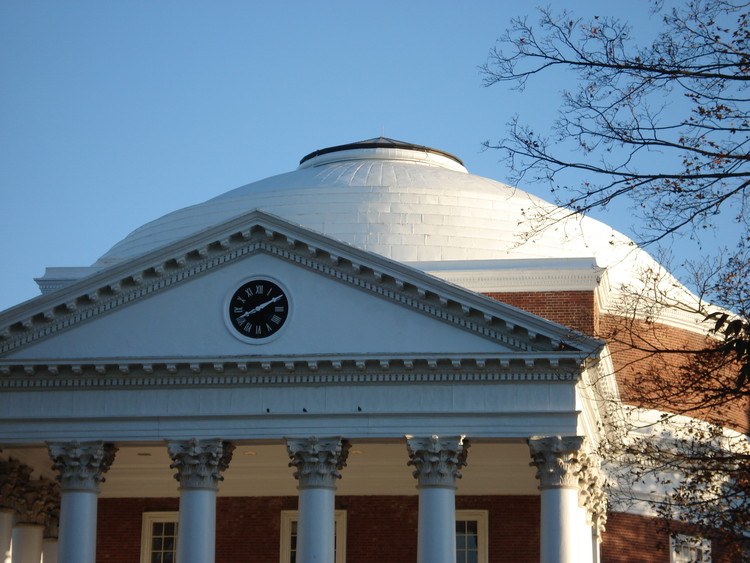 Although he was first and foremost a statesman, Thomas Jefferson was also a capable self-trained, if purely avocational, architect. Fittingly for a man who had helped to engineer a revolt against the United Kingdom’s colonial rule, Jefferson largely eschewed English architectural influences preferring instead the works of Andrea Palladio and the ruins of Ancient Rome. His first design project, begun before the War of Independence, was his own home: Monticello, a Neoclassical mansion with French and Palladian influences set at the peak of a small mountain. Jefferson was also responsible for the Virginia State Capitol, which he modeled upon the Maison Carrée, a former Roman temple in Nimes, France.[2]

The University of Virginia had been under Jefferson’s consideration for decades by the time he actually began its design. As early as 1782, he affirmed his belief that architecture, being one of the fine arts, ought to be taught at the university; when given the task of planning the institution’s curriculum in 1814, he made certain to include it.[3] He also began to formulate his concept for the school’s design long before the Virginia State Legislature approved its creation. Rather than attempting to fit every program element within a single monumental building, Jefferson envisioned a grouping of smaller, separate houses for professors, each with a ground level hall for instruction and living chambers above. Organized around a grass square and connected by student housing, this was to become what Jefferson called an “academical village.”[4]

Once the university’s founding was formally approved, Jefferson began refining his concept into a functioning master plan. Rather than attempt to take on the task alone, he sought out the advice of professional architects William Thornton and Benjamin Henry Latrobe. Using the two architects as a sounding board, Jefferson made a number of alterations to his initial plan: at the urging of both, he expanded the living spaces intended for the professors and placed a library at the focal point of the Academical Village’s U-shaped layout. Thornton provided a number of sketches for the pavilions that lined either end of the central square, while Latrobe suggested the dome which eventually crowned the library.[5]

The center of Jefferson’s final design scheme was that of an elongated U, the center of which was occupied by the grass plaza he had always envisioned. Ten academic pavilions lined either end of the square, each containing a separate department of the university and the living spaces of their respective professors. These pavilions, in addition to being connected by rows of student dormitories, were linked by covered colonnades; the sheltered walkways would, according to Jefferson, allow students to exercise even in inclement weather. The 200 meter (656 foot) avenue, left open to the picturesque Virginia landscape at one end, was enclosed at the other by the library Thornton and Latrobe had recommended.[6]

In 1817, Jefferson stated to Thornton that “[the academic] pavilions [...] shall be models of taste and good architecture, and a variety of appearance, no two alike, so as to serve as specimens for the architectural lectures.”[7] As a result of Jefferson’s didactic approach, each of the ten pavilions followed a different, nuanced classical style. Most design elements were taken from examples in the various architectural texts in Jefferson’s library: Pavilion I featured a Doric pediment inspired by the Baths of Diocletian, while Pavilion V’s Ionic details were taken directly from Palladio. The colonnades between the pavilions utilized the simple Tuscan order, while only Pavilion X and the library featured Corinthian columns.[7]

Corinthian capitals were only one of the features that set the library apart from its surroundings. Situated on the center of the university’s main axis, the library was also the only structure on the campus to feature circular geometry. Just as he had imitated the Maison Carrée for the Virginia State Capitol, Jefferson now chose to echo the Roman Pantheon; the library, which would later be named the Rotunda, is built to one-half the scale of its antecedent. Although Jefferson admired the Pantheon as the height of spherical architecture, he could not emulate its cavernous interior in Virginia. Instead, the Rotunda is divided into three floors: the lower two contained classrooms and lecture halls, while the third served as the university library. This space, ringed by columns and crowned by a domed ceiling, was the greatest built expression of Jefferson’s rational, Neoclassical ideals.[8]

As construction proceeded, Jefferson had to make a number of revisions to his master plan. In 1819, he expanded the initial U-scheme to include two additional rows of housing, known as the Ranges, separated from the original pavilions by a series of gardens with serpentine walls formed of the same red brick as the rest of the campus buildings. The gardens themselves were later divided into halves, allowing residents and guests in the Ranges greater privacy outdoors. After Jefferson’s death on July 4, 1826 and the completion of construction the following September, the Village and the Ranges were left practically unaltered; the Rotunda, which caught fire in 1895, was the only structure to be significantly remodeled.[9]

Although the countryside around it has radically transformed since the early 19th Century, the Academical Village at the University of Virginia continues to serve its original function. The Rotunda was restored to its original Jeffersonian design in the 1970s, allowing its creator’s vision to live on after two full centuries.[10] Time may have weathered the bricks of the University of Virginia, but its unique blend of European historical reference and early American rationalism remains as potent a symbol as it ever was. Thomas Jefferson did not choose to note his time served as President of the United States on his tombstone; instead, he elected to be remembered as the author of the Declaration of Independence, the creator of the Statute of Virginia for Religious Freedom, and the Father of the University of Virginia.[11] 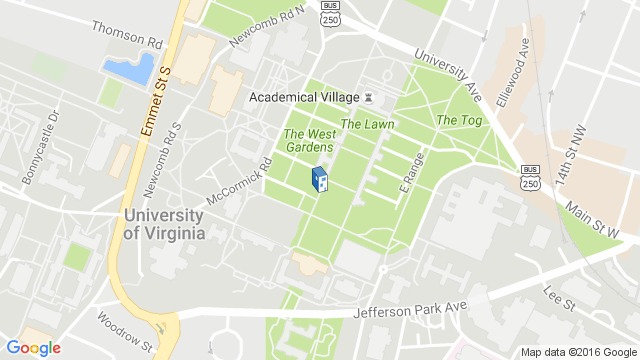