Save
Peter Zumthor's Therme Vals Through the Lens of Fernando Guerra

In this stunning photo shoot Fernando Guerra, of Últimas Reportagens, captures the Therme Vals, one of the most iconic works of the 2009 Pritzker Prize-winner Peter Zumthor. 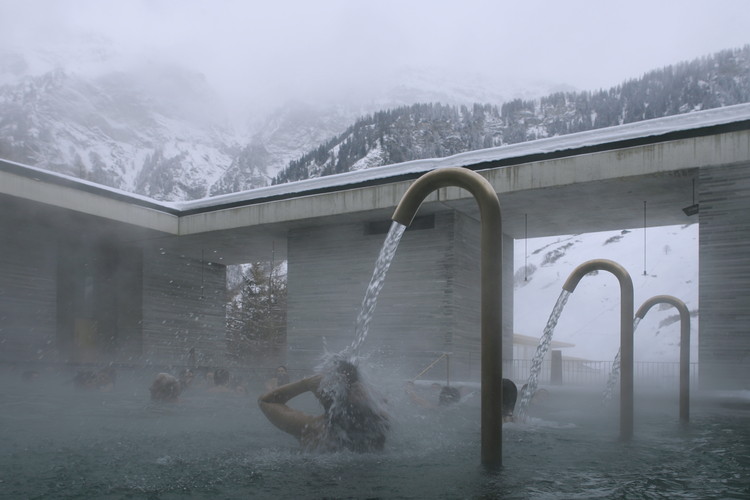 Built between 1993 and 1996, the building is part of the hotel complex in Vals. Constructed over a thermal spring, it serves the hotel guests, the local community and other visitors in search of the healing and relaxing properties of hot water.

The design of the project arose from a restriction which prevented the construction of a building height that would damage the guests' views of the valley. This led to one of the main design features of the building, with a facade and half of the building buried in the hill blending with the topography of the valley, and a flat green roof that combines with the sloping hill to create a continuous lawn.

The space within the spa is organized around two large pools, one outdoor and one indoor, surrounded by high stone walls. The building's main access is via a tunnel from the hotel, serving as a transition that prepares the visitor to experience the architecture imagined by Zumthor. Internally, you can move through the various spaces freely, without a preordained path, with views to the landscape highlighted and blocked masterfully through the building's external openings.

The facade, with a striking alternation between solid and void, clearly shows the construction technique. The volume of the building consists of 15 subsidiary volumes, all distinct from each other. These fragments are assembled as a large three-dimensional puzzle, thus the roof coverage is not continuous but broken at each of the connections between these blocks. These subtle gaps of just 8 centimeters allow the entry of a sliver of natural light. Despite its appearance as a massive, monolithic volume, the building is a composition of slightly spaced apart structures that make up the whole. The project addresses these contrasts masterfully; between the straight lines of the architecture and the movement of water, or between the gray of the rocks and the play of light and colors.

In each block the architect explores different sense, utilizing colors, the scale of the space or even the water itself, and its temperature, state, smell, and so on. Overnight, the experience is drastically altered, as most of the light in the building emerges from the water itself. 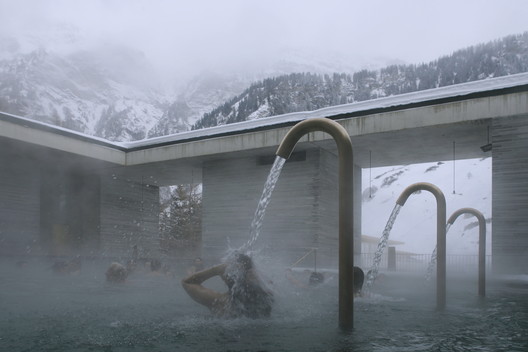