The competition to design a new flagship factory and bottling plant for San Pellegrino has been narrowed down to two firms: BIG and MVRDV. Searching for a “truly innovative project that not only conveys an artistic vision, but also sets new standards in terms of efficiency and compliancy to environmental sustainability,” the jury committee selected the two final proposals from a 4-firm list which also included designs from Snøhetta and aMDL Michele De Lucchi.

“The judging committee were so impressed by the four proposals that they decided to narrow their selection to a shortlist of two and deliberate further before announcing the winning project early next year,” explained San Pellegrino in a press release.

Their proposal embraces and enhances the architecture of the existing factory while at the same time forming an elegant framework that will allow the visitors to sense the power and purity of the surrounding Alpine nature.

The proposal’s design is focused around a series of expanding and contracting internal archways that create a multitude of spaces like majestic vaults, covered tunnels, arcades and green pergolas, whilst at the same time providing stunning views of the surrounding mountains.

At the centre of the campus, a giant geological sample will visualise the natural water’s 30-year journey during which it acquires minerals and achieves the pure flavour that is unique to S.Pellegrino.

Their proposal is centred around the famous and historic S.Pellegrino star. Their aim is to make the centre of the new complex (‘Experience Lab’) as iconic as the brand’s internationally recognised bottles.

The ambitious project includes a giant raised star with transparent sides that will allow visitors to admire the surrounding valley. The star’s roof will be covered with water which can be turned into a massive cooling waterfall in the hotter summer months.

The project also includes a more open glass façade than the current factory buildings that allows views of the surrounding nature, plus a rooftop restaurant and a pedestrian bridge.

See all four of the designs, with official project descriptions from the architects, here. 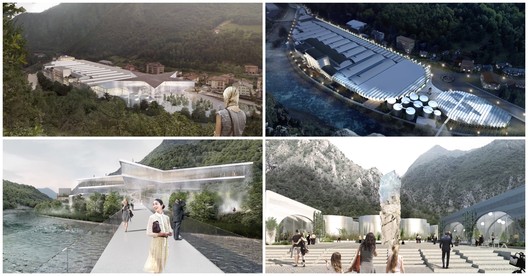