The prolific Bee Breeder competitions encourage innovative and conceptual responses to charged architectural situations. The latest competition asked participants to consider the expansive material applications (and implications) of one of the world's most prominent building materials; concrete. Described by Bee Breeders as a "poetic manifestation" of its constituent parts, concrete was then to form the basis for the Rome Concrete Poetry Hall.

The presence of the new, multi-purpose building in Rome required an awareness of the historic influences bordering the site. A further requirement was the excavation of the ground, a reference to Rome's archeological past. According to Bee Breeders, the judges favored those projects which thoroughly addressed the "spatial, material, structural, conceptual, and cultural agency of this ever expanding building science." 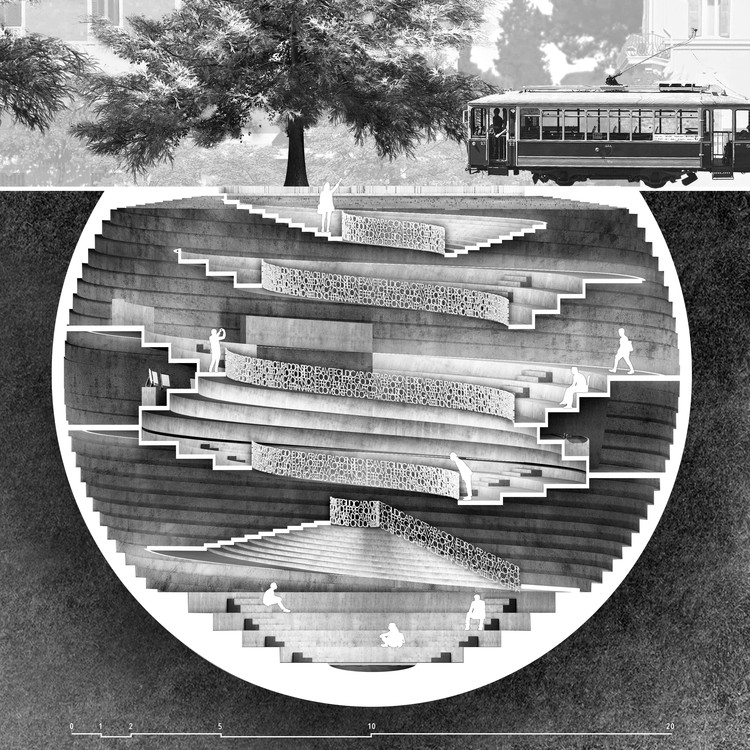 The first place winning proposal uses a subtractive approach to excavating the ground beneath the site, leaving only a few portals above ground through which pedestrians glimpse what lies beneath. By descending a ramp through one of these portals, the visitor begins a procession through a series of spaces which eventually culminate in the large assembly hall.

This composition of pure spatial typologies – the promenade, the vault, and the dome – are analyzed and deployed to frame the terrestrial plane, instead of the celestial sphere. Through this act of burial, these familiar architectural forms are transformed, creating an abstract mirror beneath the streets of the city. Through their subterranean "sanctuary," the architects are able to free themselves from the constraints of the architectural object.

The second prize winning proposal subverted concrete's traditional associations - material and mass - to mine the inherent formal capabilities of the substance. By "exploiting the monolithic" of concrete and it's effectiveness to form spheres and spirals, a strong, internalized architectural object was formed.

The underground sphere is interlaced with spiral twists which function dually as circulatory elements and dividers of space. The functionality of the floor plan is enhanced by the spiral, as it's labyrinthine form allows it to be fully occupied. The continuous and layered presence of the spirals alludes to a "continuous unfolding of hidden worlds as the user descends."

The third place winning proposal took on the existing context to create a layered narrative, intertwining the site with new spatial sequences. As the scheme unfolds, it acts as a space of transition between the Piazza and the Poetry Hall. Historical and archeological value is added to the proposal by connecting the site to its greater context within Rome.

The proposal allows the Piazza to retain its typological stance as an above ground object, and the new Poetry Hall forms the subterranean element. Formed with layers and layers of concrete stratified from the ceiling downwards, space becomes otherworldly and poetic. The procession from public space to the surreal underground realm is enhanced by small gathering spaces along the path, allowing the users to pause and reflect. 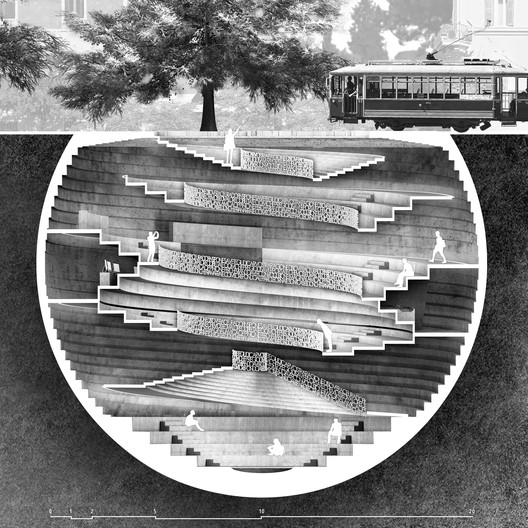