The Naomi Milgrom Foundation has released plans for Studio Mumbai founder Bijoy Jain’s design for the 2016 MPavilion, the Australian counterpart to London's wildly successful Serpentine Gallery Pavilion program. Continuing the concepts driving Studio Mumbai’s work, the pavilion will utilize a process Jain describes as ‘Lore,’ an exploration of handmade architecture and simplicity of building craft that centers on the relationship between making and human connectedness. 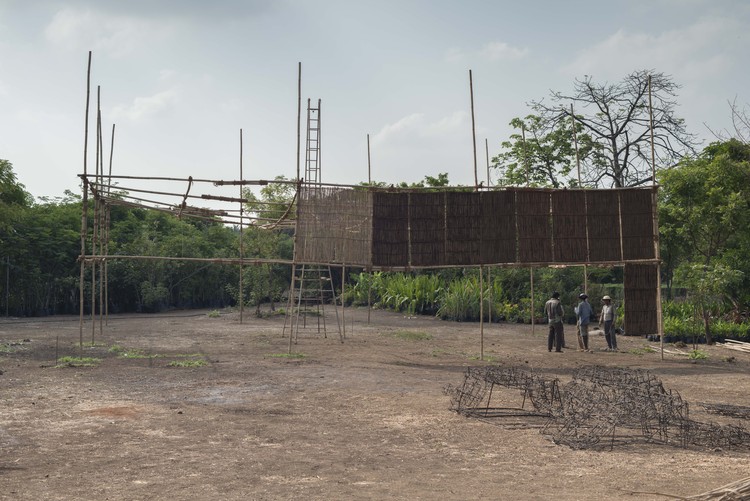 The 2016 MPavilion will consist of an 18 meter by 18 meter structure built of bamboo, rope, earth and bluestone sourced from India and Australia. Reaching 12 meters tall, the pavilion will become the largest bamboo structure ever built in Australia, and will be capped with a roof made from karvi panels (similar to a wattle and daub form of construction). The awning and roof panels will then be covered using a traditional Indian technique “whereby a mix of cow dung and earth are tied to the bamboo structure and covered in a waterproof white lime daub,” which will take on the color Australian landscape.

“The idea is not to guide observers but to allow discoveries through visual layers of thinking, making and seeing,” explains Bijoy Jain.

The pavilion borrows from the Indian typology of the ‘tazia,’ an elaborate tower used in traditional Indian ceremonies, to connect the strata of earth, sky and gravity that is shared by all humans. The project’s tazia was constructed in Bharuch, India, by a family who has specialized in building the ornate towers for generations.

“I wanted to create a space that connects the entire culture of the land. The tower or ‘tazia’ is an imaginary building that reaches deep into the stars, so it is otherworldly, and through it you can see the stars, the sky, other dimensions,” says Jain. “I want the MPavilion to be the scaffolding that provides a creative space that suspends visitors between earth, ground and sky.”

The pavilion will provide shade and space for lectures and public events, and will also feature a coffee bar and market for selling local produce.

“I want the building to be a symbol of the elemental nature of communal structures – a place of engagement, and a space to discover the essentials of the world and of oneself,” he said. “What’s interesting about the site is that the garden’s edges are formed by the streets and roads – in some ways it is a non-place. MPavilion relocates this space and makes it a place of meaning.”

Naomi Milgrom AO, MPavilion founder said: “Bijoy Jain’s practice is unique in that it focuses on honouring age-old crafts and building-techniques, which resonate strongly in this technologized world. As an architect, Bijoy thinks like an artist. His buildings are realised around a central idea, and are then fleshed out through an extensive process of collaboration, and always, careful consideration of the surrounding environment.”

Jain and his design team have been working for the past six months alongside a team of Australian builders, who Jain flew to Mumbai to involve in his collaborative approach to design and construction. Engineering and construction for the project is led by Studio Mumbai and Kane Construction in India in partnership with the Melbourne and Mumbai offices of Arup Engineering.

The pavilion is expected to take 8 weeks to build, with a grand opening in October. Once completed, the pavilion will welcome visitors for a series of talks, workshops, performances and installations until February 2017. It will then be moved to a new home in downtown Melbourne where it can become a part of the city’s architectural landscape.

This is the third edition of the MPavilion program. Previous pavilions were designed by British architect Amanda Levete in 2015 and Australian architect Sean Godsell in 2014. 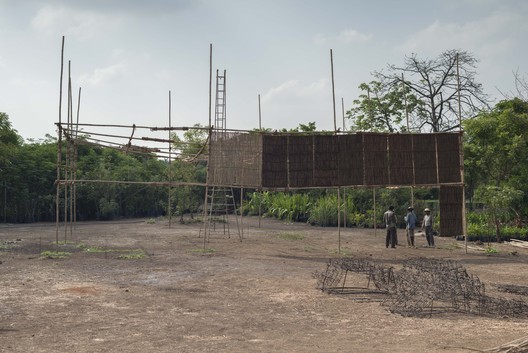