Save
Food Ink. is the World's First 3D Printing Restaurant
Share
Or
Copy

Bringing together architects, artists, chefs, designers and engineers, pop-up restaurant Food Ink. has laid claim to the title of "world's first 3D-printing restaurant." The restaurant utilizes 3D printers produced by Dutch company byFlow to create dishes out of hummus, chocolate mousse, smashed peas, goat cheese or pizza dough – essentially anything that can take the form of a paste. The paste can then be fed through the extruder to create culinary sculptures.

Food Ink.'s mission is to explore the intersection between dining and technology-enhanced user experience. According to their stated philosophy, the team is "putting [to] work most innovative technologies, like 3D-printing and augmented reality, in order to elaborate the most exquisite interactive edible experience."

The restaurant hopes to inspire conversation about the future of sustainable food, nutrition, and health as well as demonstrate how emerging technologies may be changing our dietary and cultural habits.

Following a successful opening in Venlo, the Netherlands this April, Food Ink. will travel to a new location in London from July 25-27. The temporary gastropub's new setting will allowing diners to eat around 3D printed furniture, including 3D printed stools by architect Arthur Mamou-Mani. The stools are being built using Silkworm, an open-source plug-in for Grasshopper3D developed by Mamou-Mani, Adam Holloway, Karl Kjelstrup-Johnson and Andrei Jipa. Previous works of Mamou-Mani's using Silkworm have included a pop-up store for Xintiandi Style in Shanghai and "Cloudcapsule Columns" installed in London.

The stools will also be available as a reward for supporting a kickstarter campaign to build an architectural installation at this year's Burning Man festival.

News via Food Ink., additional information from The Food Rush 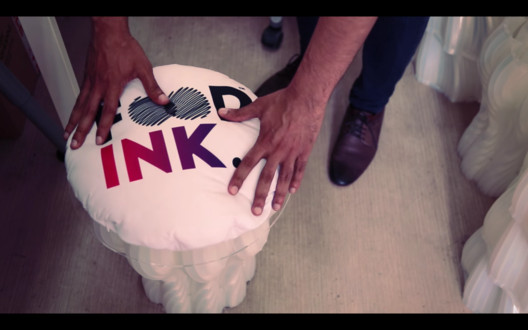