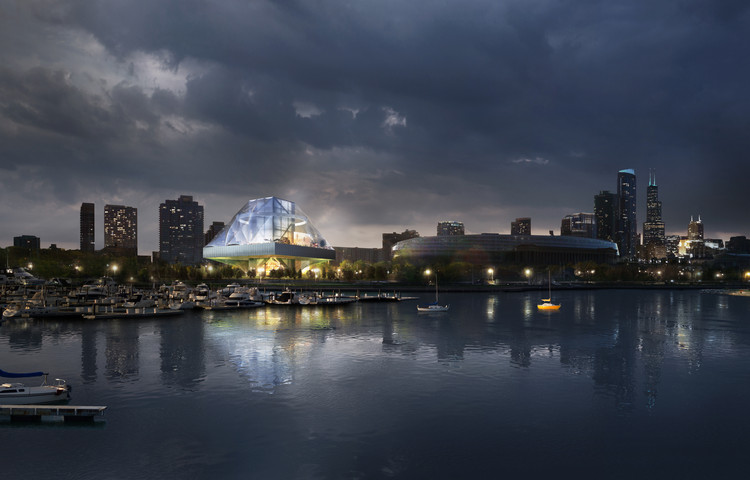 OMA’s proposal was inspired by its site’s history of sky-reaching structures. During the 1933 World Exposition, it was home to Skyride, an aerial tramway supported by two 628 foot (191 meter) tall towers. Drawing from the ambition of the towers, OMA’s Lucas Museum features cables extending from the building’s peak to the edges and key points within the gallery plate, suspending it in mid-air. The entire structure has been rotated 45 degrees to provide direct lake and downtown views and create clear entries from surrounding pathways.

The core of the museum has been filled with vertical gallery spaces that support the elevated horizontal gallery plate, kept as open as possible for maximum flexibility. On top of the horizontal gallery, the ETFE-enveloped sky garden provides display space for artifacts and serves as a social space that is freely accessible to the public.

The ETFE membrane is fritted so it can be used as a screen for projections from both inside and outside the structure. This allows the building skin to become an interactive part of the museum experience from within, and serve as an outdoor cinema for the park. Theater and lecture halls are included in the tower’s base, allowing for separate entrances to the museum and sky park. The park and gallery levels are accessible by a series of escalators, with an event space and observation deck connected by a elevator bank.

The surrounding park space is designed to be as flexible as possible, which would allow the area to continue serving as a tailgating area for Chicago Bears games at the adjacent Soldier Field. The park could have also become the setting for a range of new public events and activities, framing the building as the backdrop for the city’s cultural loop.

The Lucas Museum is currently searching for sites in California. 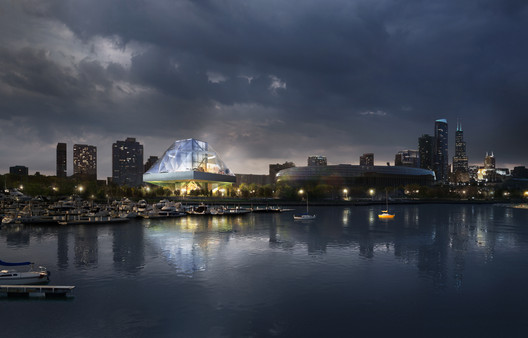