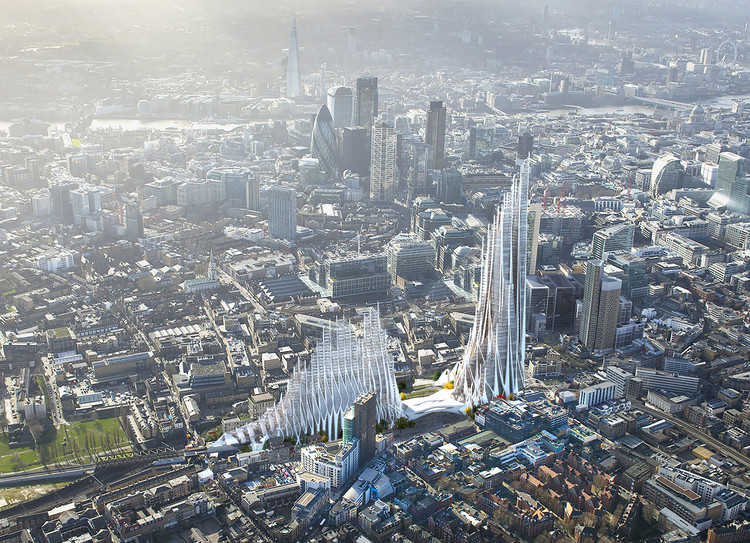 The student team utilized biomimicry and sculptural structural members reminiscent of Hadid’s signature style to create a complex consisting of a high-density tower, a mid-rise block, a train station bridging the gap between these taller structures, and a park landscape that mediates between the existing viaduct and the various access points throughout the site.

In their language of smoothly blended towers rising sinuously from the ground, the team sought to respond to the collage-like nature of London’s skyline, where the “agglomeration of differences between towers diminishes their engagement on an urban scale.”

Each of the project’s four typologies retain an individual character, but are blended into a continuous field that allows programs to overlap on the urban scale. In this manner, living, working, recreation and transportation functions can coexist within the complex.

Through their material studies, the team questioned the need and desirability of the traditional tower core, electing instead to break up the crucial tower elements—structure, elevators, stairs and mechanical systems—into individual strands. When articulated on the outside of the building, these elements give the tower a unique appearance from both street level and against the urban skyline that is never the same from two different viewing angles. This also frees up the tower’s center, allowing for crossed views, light and air not typically seen in skyscrapers.

In the project’s base, shifts in scale allow different program types to blur from residential units to hotel units, corporate office to start-ups, large retail stores to cafés. Arched openings allow access to the public areas, and serve as touching down points for the structural and functional strands that give the buildings their character—a character that is both inspired by and contributing to Zaha Hadid’s ongoing legacy. 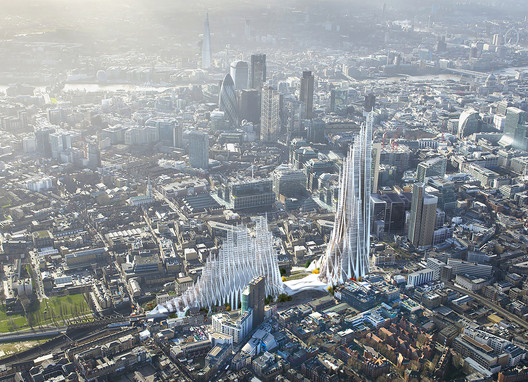