Arch Out Loud has announced the winners of their New York City Aquarium and Public Waterfront Competition, which invited students and professionals alike to design "an intertwined public aquarium and park" on an underutilized riverfront property located on the East River in Queens. Participants were asked to “redefine the aquarium typology, examining its relationship to the urban context and the public domain.”

The call for submissions was answered by 556 participants and 178 proposals from forty counties, and included ideas that pushed the physical boundaries of the site and responded to the idea of redefining the typical aquarium typology.

The jury, which included both practicing architects and educators, made their selections based on designs that challenged the relationship between the waterfront and the city, and analyzed how the combination of these two can bring people together and form a new type of aquarium. The winning proposals are simple, powerful designs with easily understandable core concepts and have the potential to become iconic sites.

This project reimagines the aquarium of the twenty-first century to be a node within a much larger “hydrological and ecological network"; or an aquarium that doesn’t hold captive animals behind a glass, but rather becomes a series of encounters with different animals and their living habitats. This designed site is situated at the center of thirty diving bells across the metropolitan region. These bells, and their networks, allow for visitors to engage in a variety of ecologies -- mobile bells designed around aquatic habitats, cadastral bells designed around the built environment, and datum bells based on bathymetry and sea-level rise.

The jurors commented on the project, saying: “Merrior questions what architecture and our built environment is. It questions taking animals away from their natural habitat, and therefore avoids the creation of spaces that try to recreate a ‘natural environment.’”

This design investigates “a maritime urbanism where the built fabric of the city shifts from traditional solid ground to a floating existence.” The name, literally means “towards the sea” and creates rectilinear volumes that float away from the riverfront and are anchored in the basin. The public spaces include a large, floating water garden.

The jury stated that the overall concept of the aquarium is very poetic, and added: “There’s tension within the idea that the buildings are floating on the water, yet their program demands that they also be filled with water. They seem more like boats than buildings...It's an urban park over water that let you and others be the facade of the project as visitors participate in moments of wonder."

The first place design creates a dynamic system that allows for multiple ways to experience the riverfront. The proposal includes an excavation of the existing site, which will become a large water basin. The basin includes a submerged island that can be accessed only by a designed pathway. A new beachfront serves two functions, by both covering a parking area and forming a new public space that includes a new boardwalk. This boardwalk “surrounds the basin and becomes a floating ring connecting the two waterfronts” and encompasses the sliding roof which will protect the biomes within.

The jurors commented on the first place project, saying: “The Building concept is intriguing and alluring; it plays with subtleties rather than with huge or hulking impact that contrasts and plays against the density and grain of NYC in a very poetic manner. The multiple level sectional design is also good and allows for beautifully depicted sensations in the presentation that will encourage a very immersive phenomenological experience.”

Find out more details about the other winners and honorable mentions, here. 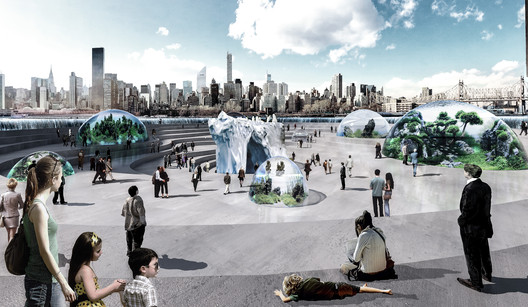