Save
The Architecture of Star Wars: 7 Iconic Structures
Share
Or
Copy

Perhaps the most enduring appeal of Star Wars for its fans is not simply its compelling storyline or its dramatic space battles - it is instead that this universe is, in fact, a universe, with all the complexity and depth that entails. One of the best ways to reveal that depth is through architecture, which offers the most visually striking combination of history, culture and technology available. As a result, the Star Wars universe is littered with a huge variety of fascinating architecture, from ancient temples to futuristic floating cities.

Today is the most holy day in the Star Wars fanatic’s calendar, and thanks to pages like Star Wars Architecture on Facebook and Wookieepedia, we’re celebrating the event with seven of the most interesting, astonishing and iconic architectural structures from the franchise. Enjoy, and May the 4th be with you. 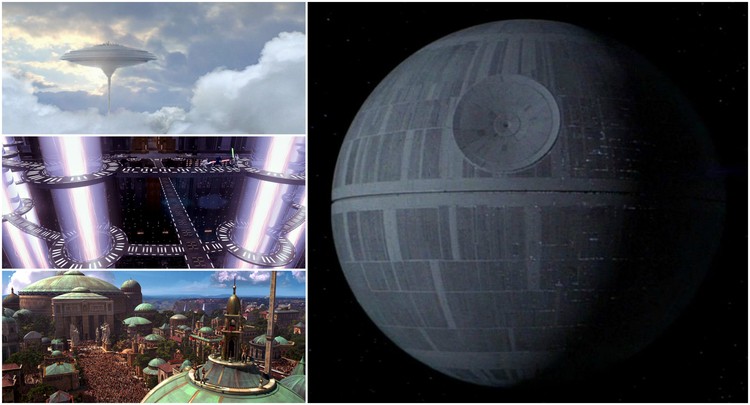 The Great Temple on Yavin 4

The Great Temple, commonly referred to as the Massassi Temple, was built on Yavin 4 by the Massassi to worship Naga Sadow, a Sith Lord who had enslaved and mutated the Massassi using Sith alchemy. The Temple later housed the Rebel Alliance base, known as Massassi Base, and the Jedi Praxeum.

Internally, the Great Temple was divided into four levels, each representing a step of the ziggurat—each level was thus larger in floor plan than the one above, but all were outfitted on broadly similar plans with small cells, chambers and corridors around a large central space.

The Plasma Refinery Complex was a large, triple-domed structure erected on the cliff face next to the Royal Palace of Naboo, in the city of Theed. Built as a way to draw vast quantities of rare plasma out of the planet's core, the refinery complex included the Theed Hangar and the city's main power generator, as well as the headquarters of the Royal Naboo Security Forces.

Within the first of the three domed structures closest to the hangar was the seemingly-bottomless extracting shaft. A hemispherical chamber with black paneled walls which constantly monitored and compensated for pressure changes, the shaft was crisscrossed by several rings of catwalks. A series of twelve evenly-spaced acceleration shafts soared from the bottom of the pit and into the ceiling.

Seen in:
Star Wars Episode I: The Phantom Menace

The Jedi Temple on Coruscant

The Jedi Temple (also known as the Palace of the Jedi) was the headquarters of the Jedi Order from the conclusion of the Great Sith War to the Great Jedi Purge and during that time was home to its major training, bureaucratic and dormitory facilities. A massive structure which soared over a kilometer above the surrounding rooftops, the Jedi Temple had the appearance of a fortress but was really a place of meditation and gentle reflection.

Located in a strategically isolated area of Coruscant which neighbored the Senate District, the Temple rested on a large city block in the Temple Precinct. Concealed within the heart of the Temple ziggurat was the upper reaches of the Sacred spire, a towering mountain that jutted from the crust of the planet deep below. The uppermost summit of the mountain erupted from the top of the Temple's base and formed the foundations of its central tower, Tranquility Spire. Surrounding the tallest tower's finned peak were four shorter towers located on the ordinal-oriented sides of the complex. Each contained an austere Council Chamber at its summit and served as the meeting rooms of the four Jedi Councils. The ziggurat shape of the edifice, coupled with the five spires, was designed to symbolize a Jedi's climb to enlightenment through the Force.

The Royal Palace of Theed, Naboo

The Royal Palace of Theed was a massive complex of sandstone-like blocks formed into towers and rotundas with cupolas covered in green tile. The largest structure in the city, it was the home of the planetary government and the destination of foreign diplomats and ambassadors. A central drum-shaped structure took up the majority of the complex, with a taller, narrower tower being the tallest point. Erected on a cliff face, the palace had several watch towers on the rocky face, placed to detect a rear attack from the valley below. Additions to the palace during each new administration was traditional and a way for the new monarch to curry favor with their constituents.

The palace was surrounded by a vast garden complex. A pool in the garden was capable of being drained; it had a control for a nearby bridge. A security gate required a passcode for entrance and exit into the garden. A secret passage led through the garden to the Theed Hangar. Filled with vast, cavernous corridors crafted by Naboo's own artisans, the Royal Palace was a showcase of the great sculptors and craftsmen of the planet.

Cloud City was an outpost and a tibanna gas mining colony on the planet Bespin, named as such because it was perpetually surrounded by giant clouds. The main saucer-shaped city structure was 16.2 kilometers in diameter, and 17.3 kilometers tall. The city floated 60,000 kilometers above the core of the planet, which was an uninhabitable gas giant. Cloud City consisted of 392 levels, in addition to level zero, a top-side surface-level plaza concourse. The level-arrangements were as follows:

The Grand Convocation Chamber, also referred to as the Senate Rotunda, Senate Arena, Senate Chamber, Great Rotunda, was the largest room in the Senate Building, in the Senate District on Coruscant and the heart of the Galactic Senate. The room was over 100 meters tall and consisted of 1,024 repulsorpods for delegations from all over the galaxy. Ringed by the canyon-like Grand Concourse, the interior of the chamber was bathed in lavender; ancient designers of the room selected the color as it was the only shade that had not been historically associated with mourning, anger, or war in the Republic.

The center of the vast chamber was dominated by a podium used by the Supreme Chancellor, the Vice Chair and the Senior Administrative Aide to coordinate the sessions. When a Senator or representative wished to address the body they were able to detach their pod from its magnetic berth and move out into the open space of the chamber on an automated path. From there, their address would echo throughout the room, translated into hundreds of different languages instantaneously and piped into the other pods for ease of understanding.

The DS-1 Orbital Battle Station, known unofficially, but more commonly as the Death Star or Death Star I, and known to the public as the Imperial Planetary Ore Extractor by the propaganda department, was a massive Imperial battlestation/superweapon with a diameter of 120 kilometers designed to enforce law and order throughout the Empire with the threat of planetary destruction. The basic structure of the station was a sphere the size of a small class-IV moon, with a kilometer-wide trench containing docking bays running around its equator. It was the very incarnation of the Tarkin Doctrine. Because of its size and shape, it was sometimes mistaken for a small moon.

The first Death Star, like its successor, was divided into two hemispheres, each subdivided into 12 bridge-controlled zones. The northern hemisphere held the main armament of the station, a fearsome superlaser. This weapon had the external appearance of a bowl several kilometers wide. The Death Star was said to comprise eighty-four separate internal levels, stacked south to north. Each level was separated into 257 sub-levels. A nominal number of sub-levels were then to be stacked around the surface of the sphere, encompassing the inner stacked levels. A number of the Death Star's docking bays were reserved as executive docking bays for high-ranking personnel, featuring larger facilities and more significant defenses.

All location descriptions via starwars.wikia.com (Wookieepedia) under a CC BY-SA 3.0 license. Don’t forget to check out the Star Wars Architecture Facebook page for more great architecture from a galaxy far, far away!