Swept up in an age of digitization and computing, architecture has been deeply affected in the past decade by what some critics are calling “The Third Industrial Revolution.” With questions of craft and ethics being heavily present in the current architectural discourse, projects taking advantage of these new technologies are often criticized for their frivolous or indulgent nature. On the other hand, there has been an emergence of work that exemplifies the most optimistic of this “Third Industrial Revolution” – an architecture that appropriates new technology and computation for the collective good of our cities and people.

We’ve collected 7 of these projects, ranging from exemplars of engineering to craft and artistry; projects that 80 years after Le Corbusier’s modernist handbook hint at a further horizon – towards a newer architecture.

The winner of MoMA PS1's annual Young Architects’ Program contest, Hy-Fi by The Living is a structure built from bricks of fungus. Though the technology for the bricks had been in use previously at smaller scales, such as in product packaging by by Ecovative, The Living saw the potential for applications in architecture and with the help of engineers at Arup, produced the bricks for this installation. The form was generated using a parametric software to minimize materials for maximum structural integrity as well.

Testing the limits of form finding in parametric design and digital fabrication, the Arabesque Wall is a 3-meter-tall ornamented wall with over 200 million individual surfaces. Devised through algorithmic design and 3D-printed, the project demonstrates the extreme capabilities of computational design, creating a piece that – though not necessarily functional – maintains a quality and level of detail that exceeds human craftsmanship. Although a highly experimental project on its own, the Arabesque Wall seems to exemplify the growing trend of high customization.

Using a robot arm, The Programmed Wall features a series of logics defined by students in the laying of a brick wall. A robot in turn interprets this logic to produce an architectonic form. Although masonry is traditionally a highly skilled trade, other robots in the field have largely automated rank-and-file brick laying. However, rather than making masons obsolete, it has complemented them, allowing them to focus on more artful, high-focus areas of bricklaying that robots cannot adapt to.

A major advantage of increasing computation is the ability to structurally engineer complex forms that would be impossible with traditional, analog methods. The Labrys Frisae Pavilion by THEVERYMANY for Miami Art Basel used software to compute a self-supporting form made of thin sheets of material. While self-supporting structures like the Labrys Frisae undoubtedly have exciting forms, arguably their greatest merit comes from their ability to reduce material use: the Labrys Frisae Pavilion was constructed of sheets of aluminium less than 1 millimeter thick.

Blurring the lines between traditional craftsmanship and digital fabrication, the Grotto by Toronto’s Partisans is a sauna on the coast of Lake Huron. The project's fluid interiors were developed through a combination of hand and digital modeling, as well as sketching and CNC milling. Despite their frequent use of digital fabrication methods, Partisans maintains a level of craft to their work by using a mixture of analog and digital design processes.

Using bio-photovoltaics, this project harnesses free electrons produced in the growth of moss, using a modular system that encourages their growth. As moss is one of the few plants that can thrive in urban conditions, it was selected for this initial experimentation. However, the wall functions with any plants, to varying degrees of effectiveness, potentially introducing an aesthetic element to an environmental solution.

Though technological advances in architecture are often expressed extravagantly, the benefits of embracing these advances can often be felt strongest in some of the humblest areas. Using boiler ash, a by-product of burning cheap materials for energy, Eco-BLAC bricks developed by MIT circumvent two problems simultaneously – the extensive landfills created by boiler ash, and the destructive practice of clay-fired bricks that is currently prevalent in India. Though humble, the Eco-BLAC brick is the culmination of years of material science and chemistry, with the potential for widespread ecological impact. 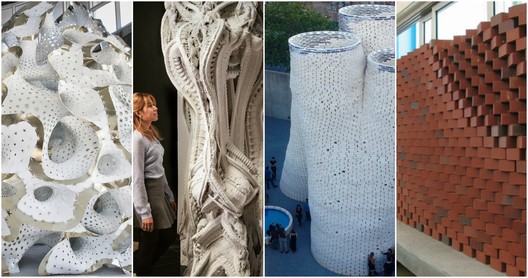