This isn't your typical New York skyscraper; Mark Foster Gage has been commissioned to design a 1492-foot-tall luxury tower in Manhattan - 41 West 57th Street. Described by Skyscraper City as the "missing link between Beaux Arts, Art Deco, Expressionism, Gaudi-Modernisme and Contemporary architecture," the outlandish design boasts a uniquely carved facade cloaked in balconies custom tailored for each of its 91 residential units.

"I think that many of the supertall buildings being built in New York City are virtually free of architectural design - they are just tall boxes covered in a selected glass curtain wall products. That is not design," said Gage.

From the architects: These stunning building plans look to push the possibilities of exterior beauty in skyscraper design. Architect Mark Foster Gage was commissioned to design a 21st century, supertall luxury building, which, he said, would aesthetically add to the city, rather than merely occupy a place in it.

The 102-story tower, proposed in the heart of Manhattan, New York City, would feature a carved stone facade and eye-catching glimmers of bronze. Residents would also be treated to sweeping views of Central Park and the city skyline, and a number of balconies would frame particular features of the surrounding landscape. Due to its splendor, the mammoth residential tower has been described as what might happen if “Michelangelo was brought back to life and commissioned to design a skyscraper.”

Gage said: "I think that many of the supertall buildings being built in New York City are virtually free of architectural design - they are just tall boxes covered in a selected glass curtain wall products. That is not design. Design is thinking of a great many things like how a building appears from different distances, or in this case, how to make each floor unique to the owner.”

"In our office discussions we thought that such a significant luxury building deserved more than just being yet another glass or steel modernist box. Those are 20th century ideas, and while they have served architecture well, our cities citizens, and the residents of such buildings, yearn for and deserve more. You can see evidence of this in the astounding success of buildings like Robert A.M. Sterns 15 Central Park West building in New York. Our design is taking this type of financial success and updating it for the 21st century.”

"It’s fairly commonly understood in most industries that beauty translates into money--- we’re bringing such thinking back into architecture and development.”

On the 64th floor, the building would have its own sky lobby, offering the likes of a retails space, a two-storey-high ballroom for events and a four-star restaurant.

Gage’s team were interested in having high and low resolution areas on the facade, revealing different qualities depending on viewing distance, and each floor in the building would also be unique.

Despite the stark difference between Gage’s designs and those of the Manhattan's skyline, the tower - which would be built on 41 West 57th Street - could be created today. What would have previously taken stonemasons decades, the intricate stone designs on the luxury building could be created much quicker using computer numerically controlled (CNC) technology.

Mark said: "Our primary interest wasn't symbolism as might have been the case with such sculptural forms a century ago. It used to be that to have sculptural stone you needed to hire stonemasons for years--so a project like Chartres Cathedral took decades. "People, in particular wealthy people, are beginning again to seek actual uniqueness, even beauty, rather than just allowing their residences to be generic real estate equations in the sky." 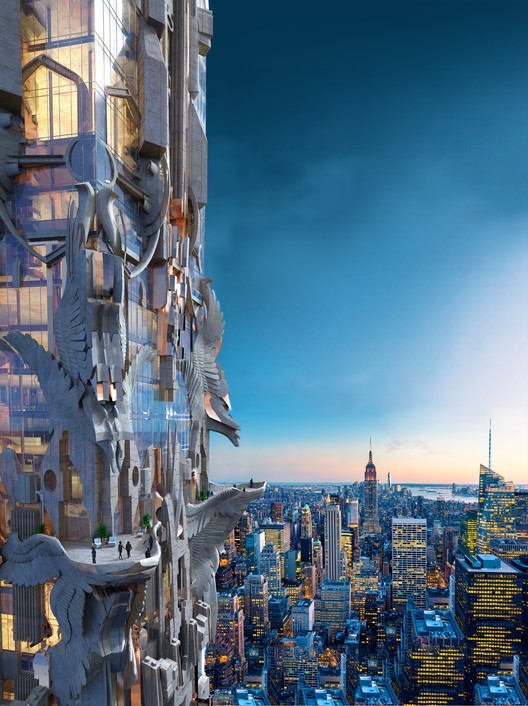