The American Institute of Architects (AIA) has announced Denise Scott Brown, hon. FAIA and Robert Venturi, FAIA, as joint winners of the 2016 AIA Gold Medal. The AIA cited the duo for their "built projects as well as literature that set the stage for Postmodernism and nearly every other formal evolution in architecture." Scott Brown and Venturi are the first ever pair to receive the Gold Medal, after the AIA approved a change to its bylaws in 2013 that allowed the award to be presented to up to two individuals working together. 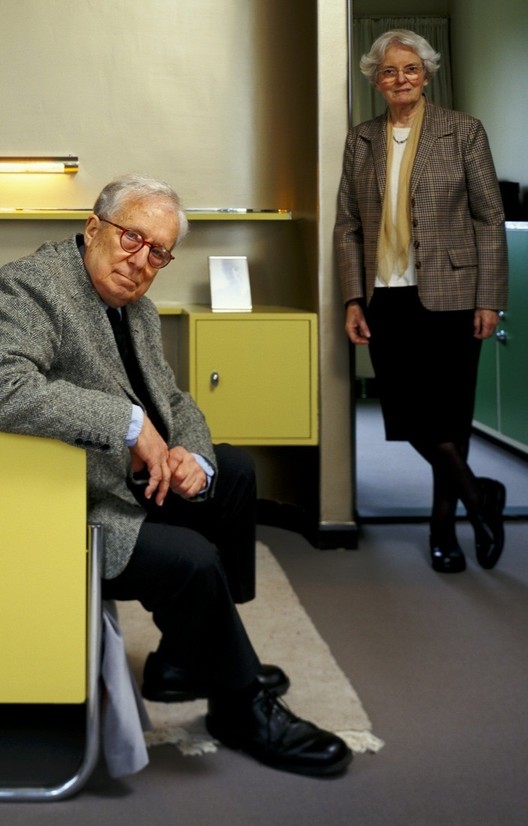 Venturi and Scott Brown have been influential for their built works including The Sainsbury Wing of the National Gallery in London, their Best Products Showroom in Langhorne, and the Provincial Capital Building in Toulouse, France. However, they are just as - if not more - well-known for their architectural theory including the seminal Learning From Las Vegas. Through a combination of these texts and their built work, Scott Brown and Venturi helped to spark architecture's Postmodern movement, breaking down the hegemony of modernism which prevailed for much of the 20th century.

"This recognition will resonate with generations of architects,” said 2015 AIA President Elizabeth Chu Richter, FAIA. “What Denise and Bob have done for the profession far exceeds the completion of a great building or two. Through a lifetime of inseparable collaboration, they changed the way we look at buildings and cities. Anything that is great in architecture today has been influenced in one way or another by their work."

Denise Scott Brown is just the second women to be recognized by the award after the award was given to Julia Morgan in 2014. In recent years, Scott Brown has become a cause célèbre for people advocating for greater recognition of women in architecture. In 2013, an appearance by Scott Brown at an Architects' Journal Women In Architecture event sparked a widely-discussed petition to have her retrospectively acknowledged for the 1991 Pritzker Prize, which was awarded to Robert Venturi alone. The petition was signed by Venturi himself, as he called Scott Brown his "inspiring and equal partner." However, the Pritzker jury ultimately declined to amend the award, stating that the current jury "cannot re-open, or second guess the work of an earlier jury, and none has ever done so."

The award might also be considered repatriation to Scott Brown and Venturi after what some considered a bizarre snub to the duo last year, when the Medal was awarded to Moshe Safdie. As the first year in which two people could share the award, many thought that Venturi and Scott Brown would almost certainly win - especially considering that the 2013 change to the AIA's bylaws was practically designed to make them eligible for the award. According to Architectural Record, the petition leading to that rule change was spearheaded by Venturi Scott Brown Associate's former employee Frederic Schwartz, with Denise Scott Brown recalling "Fred said, ‘Denise, let me do this.’ He was dying - it was his last gift to us."

In response to the Moshe Safdie win Caroline James, who jointly led the petition to acknowledge Scott Brown on Venturi's Pritzker Prize, also highlighted how overdue Venturi and Scott Brown were to receive the medal in a letter to Architectural Record, stating:

"The 2015 Gold Medal round was the first in history when the application for Venturi and Scott Brown was opened, considered, and embraced. Over three decades, many had urged Bob to apply on his own, but he refused to go for the Gold alone. Each of their joint applications was returned owing to old eligibility requirements that have since been amended. The placing of Bob and Denise among the finalists constitutes a momentous recognition of joint creativity in design."

A year on, and that "momentous recognition" has been taken a step further with Venturi and Scott Brown finally winning, together, one of the awards which many people believed should have been theirs years - even decades - ago.

This article has been updated since it was originally published to add further information about the story.