Save
When Art, Architecture and Commerce Collided: The BEST Products Showrooms by SITE
Share
Or
Copy

According to one survey, images of the BEST Products Showroom in Houston, Texas, designed by SITE (Sculpture in the Environment), appeared in more books on 20th-century architecture than any other building. The intentionally crumbling brick at that Houston store, known as “Indeterminate Façade,” and the eight other showrooms SITE designed, were simultaneously iconic and controversial, and most importantly for BEST, they brought in customers. Although SITE-founder James Wines never considered himself a Postmodernist architect, his designs for BEST, completed between 1972 and 1984, steeped in whimsical social commentary, came to symbolize the essence of Postmodernism. Today, all but one of the BEST showrooms have been demolished or altered beyond recognition, but they set a lasting precedent, and continue to influence the use of architecture in corporate branding today.

James Wines began his career as a sculptor and visual artist. He was part of the environmental art movement of the late 1960s and early 1970s, along with artists such as Robert Smithson and Gordon Matta-Clark, which focused on taking the art scene beyond sterile gallery spaces, and, as Wines described, putting art where you would least expect it.

BEST Products was a chain of catalogue showroom retail stores in the United States from the late 1950s until the company went out of business in 1997. The company’s founders, Sydney and Frances Lewis, were avid art collectors, and in the early 1970s they began working with Wines’ environmental art and architecture studio on a series of buildings for the retail chain. The Lewises were interested in bringing their love of art to their retail business and, working with Wines and SITE, rather than placing a piece of art out in front of the stores, they wanted their stores to actually become the art.

Wines saw the buildings as an exploration of the boundary between art and architecture, and working from the starting point of the ubiquitous and familiar big-box store archetype provided even greater freedom to blur the line. SITE’s work for BEST was often met with staunchly negative criticism–especially following the completion of Indeterminate Façade in Houston–by the mainstream architectural press who saw no place for humor in architecture, but the Lewises continued to support the work in spite of the critical response. On the other hand, Wines’ friends and contemporaries–especially in the art world–envied his freedom to create works that, in their exploration of decay, neglect, and artificiality, so obviously critiqued the throwaway nature of American consumer culture, the source of his clients’ business success.

Despite the criticisms, and the tongue-in-cheek nature of the designs, SITE’s architecture helped fuel BEST’s commercial success at the time. That success has no doubt inspired other companies to pursue distinctive architecture as part of a branding strategy, but in a recent conversation with ArchDaily Wines was quick to point out that most companies want an infinitely replicable architectural identity that manifests as little more than decoration, whereas each of the BEST stores, though consistent in theme, were each unique explorations of that theme in response to their individual contexts.

The first of SITE’s buildings for BEST serves as a prelude to the social critiques and architectural acrobatics that would follow. The brick façade wall appears to be peeling away from the corner of the orthogonal box of the building envelope on one end, and from the entire side of the building on the other. The design is literally shedding the artifice to reveal the reality of the basic box underneath. At the same time, the peeling corner, precariously extending over the walkway, challenges traditional notions of the structural capabilities of brick.

The Indeterminate Façade project continued to play on traditional notions of brick structures by presenting an intentionally distressed façade that implies neglect and decay. The seemingly crumbling parapet culminates in a deep gouge on the front façade, complimented by a corresponding rubble-pile of bricks rising above the entrance portico. In its pre-ruined state, the building seems to foreshadow its own eventual demise.

The most structurally daring of the completed BEST projects, SITE worked extensively with structural engineers to create a counterbalance system that could enable the Tilt façade’s asymmetrical cantilever, while maintaining the visual illusion of the floating brick wall. Although Wines resists the Postmodern classification, historians Marvin Trachtenberg and Isabelle Hyman describe the Tilt Building as exemplifying and subverting the traditional Venturi-Scott Brown paradigm by simultaneously illustrating the concepts of both the “decorated shed” and the “duck,” as an ostensibly decorated box, while “connoting its meaning through it ‘sculptural’ shape more than its nominal ornamentation.”[1]

The Notch Building challenges traditional notions of entrance and doorway, creating a fortress-like uninterrupted brick box, without any openings when the store is closed. But when the store is open, almost like the drawbridge of a medieval castle, a small segment of the façade slides away to reveal an entrance in the resulting “notch.” Once again, SITE is suggesting decay in the seemingly random opening in the brick façade.

Breaking from the previous BEST projects that had all explored various iterations of brick facades, for the Anti-Sign, SITE turned the entire building into giant sign, repeating the name “BEST” across the façade in giant letters that stretched the full height of the walls. Starting with a typical spacing at one end of the façade, the letters begin to overlap as the word repeats, eventually terminating in an illegible jumble, hinting at the high-speed experience of viewing the suburban built environment from a moving car.

For the Cutler Ridge Building, SITE returned to masonry to explore a deconstructed version of the façade that extends out into the parking lot. In fact, the entire façade is completely separated from the actual building envelope. The bulk of the façade stands several feet in front of a glass curtain wall enclosure. The portico, seemingly ripped out of the main façade and leaving a trademark jagged brick outline, stands in the median of the driveway. Finally, two lone doorways mark the ends of the rows of parking stalls, as if bringing the store entrance as close as possible to shoppers’ cars.

An existing forest on this site in Richmond, Virginia almost prevented the building from being built at all, until SITE proposed a design that would integrate the existing forest into the architecture of the showroom. Specialists spent months on the building site, re-training the roots of the trees to grow away from structural footings and foundations, and preserving the natural undergrowth, allowing nature and architecture to coexist. The result, as Wines describes in his book Green Architecture, is a “massive incision, splitting the building apart and allowing giant oak trees and ground cover to march through the open chasm.”[2] Only later did Wines realize that the added shading from the preserved trees significantly reduced the buildings need for air conditioning in summer months.

As of 2015, the Forest Building is the only BEST Showroom to remain in its original condition, preserved by the West End Presbyterian Church which bought the building soon after BEST closed down in the late 1990s.

Similar to the Forest Building, the Rainforest Building was inspired by existing forest on the building site. In this case, existing plants were preserved off site during construction, and then replaced as a part of a greenhouse façade, behind a glass water wall, which used recirculated water to help reduce the cooling load of the building.[3] The innovations in the Rainforest and Forest buildings would go on to inspire a career-spanning interest in sustainable architecture and passive design strategies at SITE.

SITE’s final building for BEST presented the most striking architectural commentary of all. Designed as a life-size cutaway diagram, SITE removed large chunks of the masonry façade, revealing mechanical systems above the suspended ceilings, as well as replica retail displays that exactly matched the displays on the inside of the glass curtain wall. The stark display of monochrome imitation bicycles, toys seemingly cut in half by the clear glass wall, and the air ducts and dropped ceiling all seem to critique the artificiality of the products inside the store. 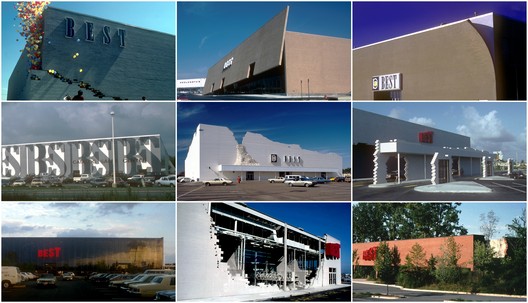