Shigeru Ban, the 2014 Pritzker Prize winner, is an architect often celebrated for his humanitarian and disaster relief structures, constructed out of recycled or recyclable materials. On the other end of spectrum, he is well-known for his meticulously constructed residential and museum projects, more often than not for high-end wealthy clients. The Nomadic Museum, however, combines both of these facets of his practice, using shipping containers and paper tubes to craft a bespoke mobile gallery for Gregory Colbert’s traveling exhibition of photography entitled Ashes and Snow. 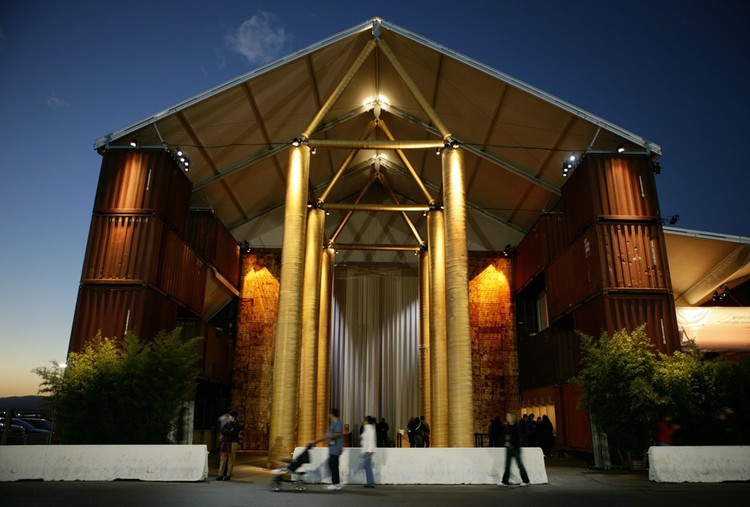 After studying at the Southern California Institute of Architecture (SCI-Arc) and the Cooper Union in New York City Ban returned to his native Japan, where his first major commission—an exhibition on the work of Alvar Aalto—employed paper tubes as room dividers, display platforms, and ceiling soffits. More than just a functional element, the tubes also complemented the shapes of Aalto’s work. Ban also experimented with residential form and material in projects such as the Furniture House, replacing walls with shelving and storage units, the Curtain Wall House, and the Paper House. Following the Great Hanshin Earthquake that struck the Japanese city of Kobe in 2005, he began experimenting with the use of paper tubes and other recycled materials to provide disaster-relief shelter and temporary structures.

Colbert first contacted Ban about creating a transportable mobile museum for Ashes and Snow in 2000, but the project would remain little more than an idea for several years.[1] An initial display in 2002 at the Arsenale in Venice provided Colbert with the notoriety to mount a touring show, and the exhibition design—with the photos suspended on cables between the gallery’s thick stone columns—served as inspiration for Ban’s ultimate design.

Although the configurations changed across the various locations, the basic components of the structure remained identical. Exterior walls consist of a checker-board stack of shipping containers, with the spaces between the containers occupied by sloping sections of white PVC. Metal and paper tube trusses create a classical pediment at the ends of the galleries, supporting the PVC membrane roof. Two rows of thirty-inch-diameter paper tube columns march down the center of the gallery, mirroring the columns of the Arsenale, and articulating the 'nave' of the cathedral-like space. A wide pathway of wooden planks (recycled from construction scaffolding) runs between the rows of columns and defines the circulation path, while the remainder of the floor is occupied by a bed river rock. Alessandro Arena’s lighting design further emphasize the minimal design, with fixtures from above illuminating the walkway and grazing the columns, and spotlights for the art creating stark shadows on the river rock floors. The bulk of the cavernous volume remains in shadow, keeping the focus on the art.

Although the structure itself appears relatively simple, the two initial sites for the traveling exhibit posed significant challenges. In New York the building was arranged as one continuous 693-foot linear gallery, on Manhattan’s abandoned Pier 54, with an open space at the far end for the projection of a film version of Colbert’s work.[2] The building filled the width of the pier, and the ageing marine structure could not support the weight of a crane. All components had to be installed from barges in the Hudson River, or from within. To prepare for an aggressive eight week build schedule, the construction team built a full scale mock-up of an eighty-foot section of the structure in Elizabeth, New Jersey, allowing the team to develop a successful strategy to meet the site's unique constraints.[3]

The bulk of the shipping containers used in the structure were rented at each location, while the remainder were used to ship the building components from location to location. Following the New York installation, Ban and Colbert reworked the arrangement of the building to improve circulation. The result was an H-shaped plan for the Santa Monica version of the structure, with two long gallery sections flanking a central space with a butterfly roof, housing the film presentation and a shop. This version, built on a parking lot adjacent to the Santa Monica Pier, did not face the same construction challenges as the New York installation, but did encounter new hurdles in addressing the city’s strict seismic regulations. To ensure the stability of the structure, the shipping containers were mounted on eight-inch pipe columns drilled 40 feet into the ground, and aluminum extrusions replaced the steel frame trusses used in New York.[4] In addition to the structural and configuration changes, the Santa Monica iteration also made a slight aesthetic shift, using a monochromatic palette of rust-colored containers, providing more visual uniformity compared to the seemingly random selection at Pier 54.

At its various stops around the world, Colbert’s art received mixed review. Ban’s building, on the other hand, was almost universally praised. As Metropolis contributor Philip Nobel said: “It is easily the best public space in New York right now  perhaps even good enough to make the insipid art it houses work.”[5] On the opposite side of the table, Los Angeles Times architecture critic Christopher Hawthorne expressed some disappointment, noting that, “[...] on the whole the museum suggests little of the modest, vulnerable beauty that marks Ban’s best designs.”[6]

Originally intended to travel to exhibition sites around the world, Ban’s version of the Nomadic Museum made only one more stop in Tokyo, with a configuration similar to the Santa Monica setup. For a fourth version of the Nomadic Museum in Mexico City, Colbert switched to Colombian architect Simón Vélez. Designed to recede in favor of Colbert’s photographs, Shigeru Ban’s building may have ended up overshadowing the art it was designed to showcase.

[5] Nobel, Philip. “Pier Over Trouble Waters: In the Nomadic Museum, Shigeru Ban survives a close call with kitsch,” Metropolis, May 2005, 90. 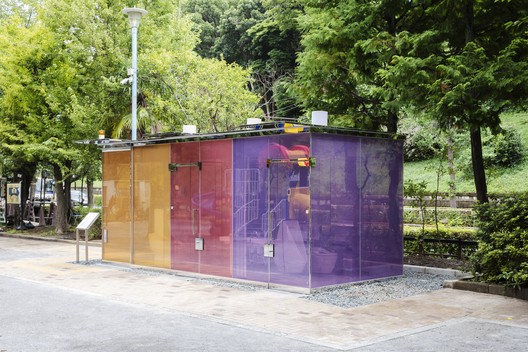 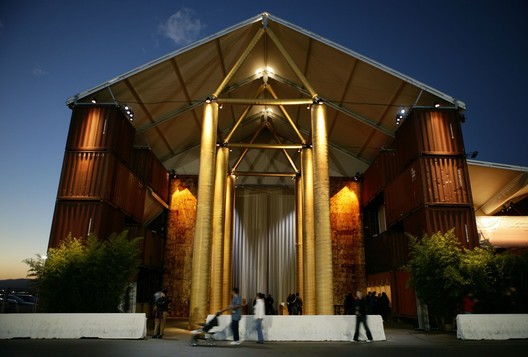