After teasing the general public by offering the press and 3,000 lucky local citizens with a preview day six months ago, the Broad Museum has finally opened its doors. Designed by Highline architects Diller, Scofidio + Renfro, the museum took four years and $140 million to build, adding its presence to LA’s architectural Broadway, Grand Avenue. With its visually striking facade given the tough task of responding to its enigmatic neighbor, Frank Gehry’s perennially polarizing Walt Disney Concert Hall, the building was sure to attract the attention of the critics, and they rose to the challenge in their droves. Read on to find out what five critics thought of the building dubbed “the veil over the vault.” 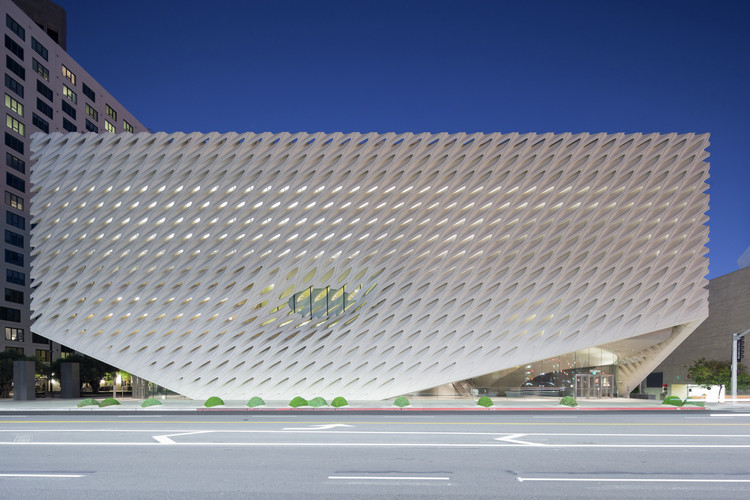 “With a strong and simple idea, strongly and simply realized, it even matches the indomitable Disney in presence.” - Joseph Giovannini, Architect Magazine

Giovannini finds the Broad to be a successful competitor and partner to its neighbor by taking a simple form and manipulating it with multiple clever yet subtle architectural interventions:

“DS+R used a few deft moves to make its box something more— lifting the corners, indenting the wormhole, and creating a façade of gridded panels that stretch and deform according to light and position.  The box doesn’t look or behave like one.”

Constrained by a 70-foot height restriction, a site relatively small compared to its some of its neighbors, and the programmatic needs of storing and displaying over 2,000 contemporary masterworks, DS+R were left with little choice but to select the most pragmatic formal move possible. But according to Architect Magazine’s Joseph Giovannini, boxes wrapped in fancy wrapping paper can house impressive interior spaces as well:

All critics were unable to view the building for too long without a mention of the shimmering bauble in their periphery: Frank Gehry’s perennially polarizing Walt Disney Concert Hall. And as most critics subsequently noted, the architects were well aware of the relationship to the museum’s glamorous neighbor:

“With its turbulent, churning façade, Disney Hall is a hard icon to follow.  New-York based DS+R simply changed the subject, creating a contrarian design that is everything Disney Hall isn’t: straight vs. curved, matte vs. reflective, whole vs. fragmented, linear vs. curvilinear, conceptual vs. abstract, porous vs. flat.”

“DS+R, for all its imaginative talent, is still figuring out how to shepherd its boldest design ideas through a challenging construction process” - Christopher Hawthorne, LA Times

LA Times critic Hawthorne also notes the contrast between the facades of the Broad and the Disney. But whereas he sees the concert hall as “reflective and extroverted” he describes the facade of the Broad as “punchless” and at odds with the connotation of the building’s concept:

“The facade is oddly inert and largely opaque, with little of the lightness or translucency suggested by the word "veil." This is no small imperfection in a building whose exterior draws so much of its architectural power from pattern and material texture as opposed to form.”

This opinion is no doubt shaped by visions of a skeletal, airy “veil” seen in early renderings of the project, and the inability to achieve such thin dimensions in the reality of construction. Yet his disappointment in the visual qualities of the skin seemed not to have impacted his opinion of its spatial moves:

“As you approach the museum on foot, you begin to notice just how dramatically and effectively the facade is lifted at the front corners, exposing walls of glass behind the skin and seeming to pull the Grand Avenue sidewalk into the museum.”

“A space for art that respects the experience of looking and engagement, as a thing apart, and something worth leaving the world behind to do on its own terms.” - Philip Kennicott, Washington Post

Kennicott chooses to compare the building to the year’s other long-awaited museum unveiling, the Whitney Museum in New York. Renzo Piano’s building was so inviting to the city, and the city so inviting to the museum’s occupants, it drew comments describing it as “a wonderful place for people who get easily bored by art." The Broad is no such place:

“The prevailing theology of many public buildings today, including too many museums, is about erasing the line between the city and the structure, so that one feels the excitement of urban energy ever present, even while looking at art. The most salient example is the new Whitney Museum in New York, which makes love to Manhattan so eagerly that one can’t help but gape at the city’s promiscuous ubiquity. The Broad is more inward-looking and allows for a more contemplative experience. Perhaps without intending to do so, it recaptures some of the spiritual drama of the much-maligned monumental museums of yesteryear.”

While Hawthorn, along with many others, was disappointed by the veil’s inability to live up to its renderings, Kennicott finds that its increased opacity allows it instead to contribute to the drama of entering the museum’s lobby space from the arid and often oppressively bright LA streetscape:

“Triangular portals scoop in visitors from the street, who then discover the voluptuously non-Euclidean lobby, a space that feels both subterranean and monumental at the same time, like caverns measureless to man, or the underbelly of some enormous prehistoric mammal.”

“Though too eccentric to be an enduring touchstone work of architecture, the building deserves to be celebrated for a bravado and smart urbanism” - Julie V. Iovine, Wall Street Journal

Though she stops short of labeling the building as one for the history books, Iovine presents a strong appreciation for the theatrical journey of the design’s circulation:

“The experience of moving through its spaces feels cinematic, and highly controlled. Visitors entering the lobby are strongly cued to board the 105-foot-long escalator, boring straight through the second floor where the storage vault resides. Arrival at the third-floor gallery is a 'welcome to Oz' moment.”

The drama of the entry continues through the building, in particular when transitioning from one floor level to another. The cinematic feel is supported by transitioning between low-light stairways and escalators to expansive rooms cast in indirect light by the perforated facade system. Iovine also speaks of the museum’s unique relationship to its storage facility. Rather than something to be hidden, the storage of the artworks is treated as its own performance piece:

“The descending staircase provides Alfred Hitchcock suspense, or at least some voyeurism. Stairs, glowing with under-lights, wind down through semidarkness, passing windows that peer at odd angles into the storage vault with all the racks of paintings—the literal innards of the museum—exposed.”

Architectural Record’s critic Sarah Amelar, too, views the experience of visiting the museum as one of whimsy and intrigue:

“Exciting yet incongruous, this straight shot up to the third-floor galleries recalls such improbable juxtapositions as the escalator in Perugia, Italy, rising to the city’s upper precinct through archeological ruins, or the belief-suspending exhilaration of a theme-park ride.”

Her final metaphor combines the reactions to the building’s escape from the city and play of light:

“Once you exit, there’s a feeling akin to stepping out of a cinema at midday. Of course—as with movies—you’ve just passed from near-darkness into a luminous place of escapism and back, transported by narrative devices, however illusory, before re-emerging into the light of day.”

Can't get enough of Broad Museum Reviews? There are a few more we haven't summarized. Check out takes by Paul Goldberger, Edwin Heathcote and Oliver Wainwright.