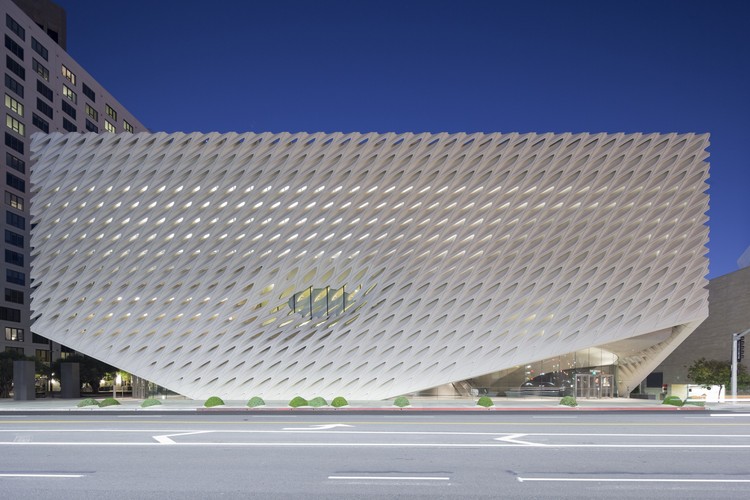 Text description provided by the architects. The Broad is a new contemporary art museum built by philanthropists Eli and Edythe Broad on Grand Avenue in downtown Los Angeles. The museum, which was designed by Diller Scofidio + Renfro, will soon be open. The museum will be home to the nearly 2,000 works of art in The Broad Art Foundation and the Broads’ personal collections, which are among the most prominent holdings of postwar and contemporary art worldwide. With its innovative “veil-and- vault” concept, the 120,000-square-foot, $140-million building will feature two floors of gallery space to showcase The Broad’s comprehensive collections and will be the headquarters of The Broad Art Foundation’s worldwide lending library. The Broad is also building a 24,000-square-foot public plaza adjacent to the museum to add another parcel of critical green space to Grand Avenue.

The Broad targets LEED Silver certification. With its electric car charging stations, bike parking spaces, rooftop drains routed to street level gardens that filter runoff, high-efficiency plumbing fixtures that help reduce water use by 40 percent, and its easy access to public transit including adjacency to the new Metro Regional Connector station at the corner of 2nd Street and Hope Street, The Broad aims to be in the top tier of eco-conscious and efficient museums.

Dubbed “the veil and the vault,” the museum’s design merges the two key programs of the building: public exhibition space and the storage that will support The Broad Art Foundation’s extensive lending activities. Rather than relegate the storage to secondary status, “the vault” plays a key role in shaping the museum experience from entry to exit. Its heavy opaque mass is always in view, hovering midway in the building. Its carved underside shapes the lobby below and public circulation routes. Its top surface is the floor of the third floor galleries.

The vault is enveloped by the “veil,” a porous, honeycomb-like, exterior structure that spans across the block-long building and provides filtered natural daylight. The museum’s “veil” lifts at the corners, welcoming visitors into an active lobby. The public is then drawn upwards via escalator, tunneling through the vault, arriving onto nearly an acre of column-free gallery space bathed in diffuse light. The gallery has 23- foot-high ceilings, and the roof is supported by 7-foot-deep steel girders. Departure from the third floor gallery space is a return trip through the vault via a winding central stair that offers glimpses into the vast holdings of the collection.

Public amenities associated with The Broad include an adjacent 24,000-square-foot public plaza, a new restaurant being developed by restaurateur Bill Chait, a new mid-block traffic signal and crosswalk connecting The Broad and public plaza with MOCA and the Colburn School and additional streetscape improvements. The plaza’s bosque of 100-year-old Barouni olive trees and grass create public space for picnics, outdoor films, performances and educational events. Pedestrians will use wide stairs and an elevator at the Hope Street end of the plaza to access Hope Street and the planned 2nd and Hope Street Metro Regional Connector station. 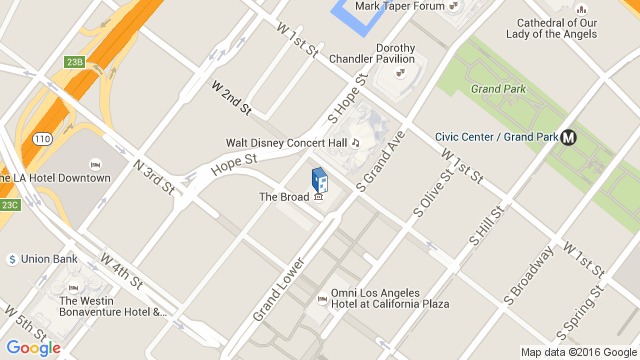 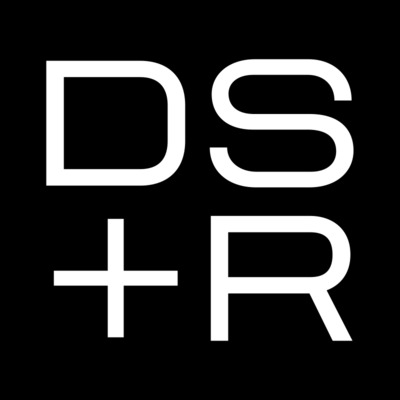 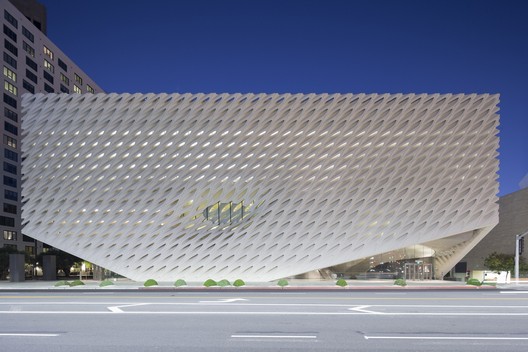