Images of Moshe Safdie's first New York project has been released. Planned to rise on a Manhattan site at West 30th Street, between Broadway and 5th Avenue, the 64-story mixed-use tower will feature a limestone base that compliments and serves its historic neighbor: the Marble Collegiate Church, one of the Collegiate Churches’ five ministries.

The building "will be distinguished by its vertical massing, which breaks down the scale of the tower into a series of three-story-high, offset projections," says Safdie Architects. "The offset projections also provide energy efficiency by self-shading the tower’s facade, further enhanced by additional sun shading at the south facade."

The tower will house new administrative and programming spaces for Marble Collegiate’s congregation, the administrative staff of the Churches and Intersections International, a major conflict resolution initiative of the Collegiate Churches. It will be sited on the north end of the site to avoid disrupting the freely standing 1854 church, as well as form a new public garden that will be designed by HMWhite.

The funds generated by the development of the building will support both the restoration of the historic Church and the vital programs of the Collegiate Churches. 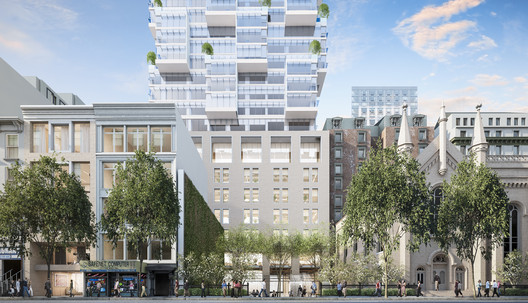