Save
Aeriform Ecologies: An Atmospheric Archive for Industrial Effluvium
Share
Or
Copy

Enter Aeriform Ecologies: An Atmospheric Archive for Industrial Effluvium. Conceived as a thesis project by Jennifer Ng, University of Michigan with thesis advisor Kathy Velikov, Aeriform Ecologies delves into the possibilities for byproducts of petroleum production by proposing a network of solutions for the 'spatial runoffs' created by fossil fuel extraction. Based on a futuristic approach that includes a network of unmanned atmospheric gas harvesting dirigibles, the project blurs the lines between science, technology, and architecture.

Explore the effervescent world of Aeriform Ecologies after the break 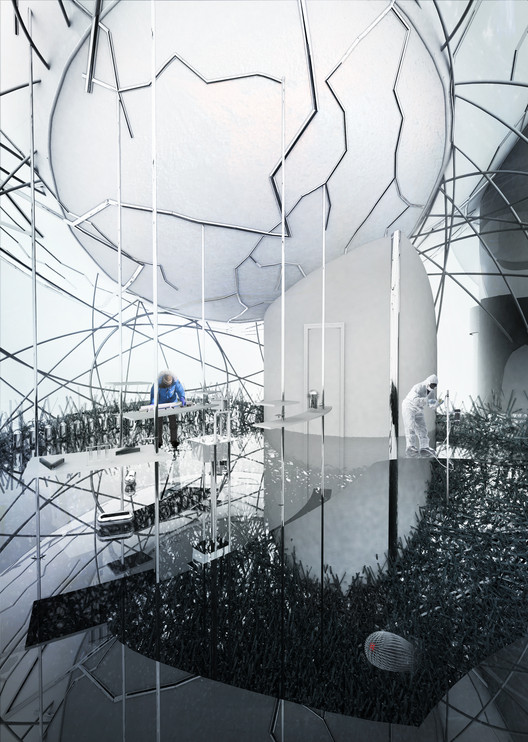 Are off-gases and detritus created by fossil fuels a component of the final product? According to Ng, they are. "Aeriform Ecologies observes the effluent flows of industrial activities related to petroleum and fossil energy extraction by viewing these gaseous byproducts as spatial runoffs and extensions of its infrastructures," she says. Most importantly, Aeriform Ecologies proposes a sustainable solution to a previously unresolved issue: transforming toxic carbon gases into solid matter to be used for construction material and scientific research.

The process begins with the deployment of drone-like dirigibles known as 'Scouts' into areas containing low lying atmospheric pollution. The Scouts serve as carbon dioxide and methane detectors with transmitters to convey data to 'Harvesters,' a secondary set of drones with further specialized carbon collection technology. Similar to bees collecting pollen, The Harvesters gather petroleum byproducts from the air with the assistance of an internal vacuum-like sensor equipped mechanism. Inside, gases are converted into solids using a modified carbon sequestration process. The Harvesters then travel along the air currents of the jet stream to arrive in Antarctica for testing.

Named after the Queen Maud Mountain Range in Antarctica, a research facility will be constructed on unclaimed land built of a combination of carbon collected by harvesters and reused materials. According to Ng, this facility will serve as an archive and hub for analysis of harvested carbon from the global troposphere. Upon arrival, most of the carbon will be tested, sampled, and stored based on its geographic origin, while the remainder will be used in the ongoing construction of the research facility. The facility will be comprised of a combination of research and living "pods," constructed almost entirely of captured carbon.

"This juxtaposition between the man-made architecturally programmed pods with the emission harvesters acts as a way to reimagine our relationship with anthropogenic byproducts," says Ng. The mission of Aeriform Ecologies is, in essence, to challenge current human perceptions of the function of carbon emissions. Ng aims to broaden the awareness of the invisible effects of petroleum extraction while simultaneously proposing viable solutions to the atmospheric problem.

Albeit beyond the parameters of the traditional role of architecture, Ng's ecosystem explores the the responsibility of environmental designers in a broader context. "The project speculates on the viability of designing architectural space through the curious and primal undertones of inhabiting a pseudo-geological landform comprised of aeriform matter," states the brief. Instead of forcing the end of fossil fuel, architects should adapt a new pragmatic methodology of working with its gaseous infrastructure, according to Ng. Where most see air pollution as an untreatable symptom of a larger problem, Ng sees an opportunity to harness the potential of existing gases for myriad uses.

'Aeriform Ecologies: An Atmospheric Archive for Industrial Effluvium' will be on display at Taubman College, University of Michigan in Ann Arbor until early September 2015. Find out more here.