The 6th annual “Space for New Visions” competition has announced its winner: a project entitled “Homes for the Homeless,” by James Furzer of Spatial Design Architects. Hosted by FAKRO, a global manufacturer of roof windows and loft ladders, and A10 Magazine for European Architecture, the competition sought proposals that incorporated FAKRO products. With entries from around the world, projects were judged based on user comfort, environmental impact, functionality and natural light, among other things. Read about the winning entry after the break.

Recognizing the issue of homelessness in the U.K., James Furzer focused on creating a safe space for “rough sleepers” – of which there are over 750 on any given night in London alone. Homes for the Homeless consists of a series of pods that attach onto existing buildings. Able to be used both independently or to form a community of pods, they shelter the homeless from the harsh weather of Britain.

Designed for a budget, the material application of each pod is variable, allowing costs to be kept low and for a pod’s outer appearance to match that of its host building. As they are meant to be temporary shelters, charities would manage the general maintenance and availability of the pods.

With economic downturn, homelessness is on the rise. Accompanied by feelings of isolation, the average homeless person dies at just 47 years old, and are 35 times more likely to commit suicide than the average person. Being insulted, harassed and attacked by the public, it becomes difficult for the homeless to fix their situation. With Homes for the Homeless, James Furzer hopes to change attitudes toward homeless people.

Learn more about his proposal here. 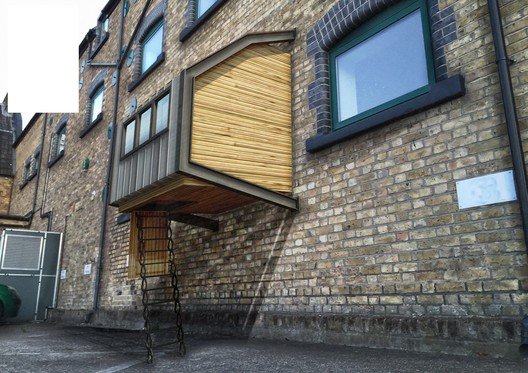