Chilean architects, Guillermo Hevia García and Nicolás Urzúa Soler, have been selected as the winners of the 2015 Young Architects Program (YAP) Constructo in Chile for their installation proposal, “Your Reflection." The installation will be inaugurated in March 2016 in Santiago, and aims “to build an uncertain experience, a situation of estrangement” so that the visitor is waiting to see “what is going to surprise them in the next place."

Along with New York, Istanbul, Rome and Seoul, Yap Contructo (Chile) is one of five versions of the Young Architects Program (YAP), carried out by MoMA and MoMA PS1, which aims to “support research in innovative design and promote emerging talent.”

Learn more about the proposal after the break.

Note from the Editor: The numbers in parentheses in the text reference artistic inspiration that can be in the attached images.

Description from the architects: We do not know with certainty whether "Your Reflection" is an experience, an illusion, a landscape, a place, an object, an attempt at surrealist construction, an artistic approach or a mix of several of these. This unstable or uncertain position, facing something that is difficult to determine, but that is capable of questioning the visitor, and returning to something that gives sense to "the project", seduces us. (1)

We have meant to build an uncertain experience, a situation of estrangement, one which we do not intend on controlling, as the possibilities of reflection and deformation provoked by the concave and convex mirrored steel bi-dimensional planes are infinite, as we moved through it. (2)

We want the visitor to be expectant of what is going to surprise them in the next place.

The project has its starting point in the two definitions of the word reflection, on one side the literal optical reflection (deformed and multiplied) in the physical sense of the phenomenon [A], and the reflection in a mental [B] sense, on seeing oneself reflected/deformed in the project, and that this duality generates a certain state of introspection. (3)

The name that we have given the proposal alludes precisely to this double condition: "Your Reflection", where the personal pronoun "you(r)" alludes to the project existing in the means that the visitor is in it, and with it, and the project is capable of producing something in this visitor. Without this witness, "the project" would not exist. (4)

It is not just about looking at the project, but letting it surround you, envelop you, to become part of it, and that it becomes part of you, passively and actively, following our own capacities of observation and reflection.

The materialization of this experience is achieved through two operations:

The first is the definition of a support or topography, a landscape with smooth mounds, covered in grass and spongy vegetation, colored by an infinite number of different wild flowers (5), and that will also be covered by a small creek that could be crossed with a simple leap. This landscape is taken from an imaginary location which may be a wild meadow or the moment of some painting by Alfred Sisley (6). We believe that the natural (artificial) slope and sponginess is one of the most pleasant places to walk, sit down, rest or lie down.

The second operation is the insertion of three mirrored steel bi-dimensional planes, which build a series of inside and outside spaces, eliminating the limits, disappearing, letting its reflected surroundings become the real project.

These tapes are formed and structured using an abundance of concavities and convexities which allow self-supporting and standing on the same level of 3.2 m and with only 40 mm of thickness (7), almost without elements that anchor it to the ground, only the minimal points that the construction requires.

It is the relationship between these 3 bi-dimensional planes that forms an asymmetric volume, almost broken up, where the construction of the form itself does not interest us, rather than the interaction between the mirrored planes, the curves and the counter-curves, where we have multiplied the amount of reflecting and deformation situations in order to produce an interaction belonging to a world of illusions, more surreal than real given that, in nature, vertical reflection does not exist. (8)

Just as it happens in the “Palacio del Alba y el Ocaso” (9), there are no horizontal roof elements, the light and the shade are formed and projected on the ground by the effect on the vertical plane. The proximity of the planes will be inclined to shade the mound for most of the day, generating a template environment, which is also refreshed by the sound and the presence of the creek running through this landscape.

The same resource of vertical planes and projected shadows admirably used by Jose Antonio Coderch to form and shade the terrace of the Extension of the ETSAB building (10), built in Barcelona between 1980 and 1984.

The curves, counter-curves and the fact that, at many moments, the tapes are facing each other and at different distances, will generate a universe of reflections, multiplications and deformations, as if we were in a painting of René Magritte (11), or even facing some portraits by Francis Bacon (12). This experience is achieved as we move into the project, our degree of approach varies, we approach it, touch it, we move away. These situations are intensified in the means that more bodies move through this place, generating choreographing of colors and movements that will be infinitely multiplied.

We have wanted to change the center of the object's proposal to the experience of the subject, their interaction and that of others, and how their surroundings or context will be reflected and deformed with them and before them. In the end, we do not intend on building a closed proposal, but rather articulating a universe of sensations and experiences open to many things taking place.

[A] RAE 1. f. Physical change of direction or of the direction of the light, of the heat or of the sound when an obstacle is put in the way.
[B] RAE 2. f. Though or consideration of something with attention and thoroughness to study it and understand it well. 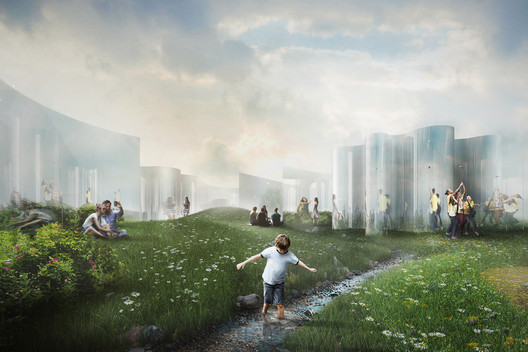