Save
Alison and Peter Smithson: The Duo that Led British Brutalism
Share
Or
Copy

Born in Stockon-on-Tees, Peter began studying architecture in Newcastle, then part of Durham University, but was interrupted in his studies by the outbreak of the Second World War. Enlisting in the army and fighting as an engineer in India and Burma, he met Alison Gill upon his return to Durham University after the war ended. After the completion of Alison's own architecture degree, the pair married in 1949 and initially joined the architectural department of London County Council, then in charge of a wide range of powers including city planning and council housing.

The disruption of the war led to huge changes in society that gave the Smithsons their break. A new expansion of education following the passing of the 1944 Butler Education Act created an entirely new form of school; the Secondary Modern. The baby boom and this new schooling system required new, architecturally bold school buildings on a massive scale—winning the commission while still in their early twenties, the Smithsons were able to use the boost to set up their own practice. Hunstanton School, a starkly stripped-down formal building, immediately attracted attention from critics for its resolutely formal plan and for going against the prevailing method of easily replicated modular school buildings. The building was a nevertheless pragmatic and relative success, proving cheap, well planned, and popular with staff, although severe problems with glazing and heating emerged over time.

Using the cachet provided by Hunstanton to join Team X's challenge to modernism from within the Congrès International d'Architecture Moderne (CIAM) and form their own design philosophy, the Smithsons helped form the core tenets of Brutalism: low-cost modularity, material focus, and purity and, most importantly for the Smithsons, buildings that reflected their inhabitants and location, ones that fostered community—Modernism with a Human Face. Ambitious and defiantly avant-garde, the pair's impact on the architectural scene in Britain was enormous.

Creating sensitively thought-out yet radical schemes for high profile commissions including the headquarters of the Economist, the British Embassy in Brasilia, a new building at St Hilda's College of Oxford University, and a plastic, mass-produced house for the 1956 Ideal Home Exhibition, the pair then moved on to what they hoped would be a beacon of modern housing design: 1972's Robin Hood Gardens. Hoping their "streets in the sky" could combine the community of the Victorian slums with the efficiency and density of Le Corbusier's housing blocks, it instead became known for structural problems and a crippling crime rate, and ended the pair's public career. Despite this, the Smithsons continued working quietly through the 1980s and never stopped defending their designs.

Alison And Peter Smithson On Housing

The Story Behind the Brutalist Icon: Economist Plaza 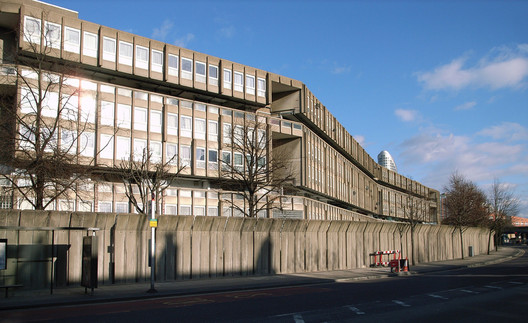