Nervi was born in Sondrino, Italy, and studied Civil Engineering at the University of Bologna until 1913. From even the earliest days of his career, Nervi had an incredible artistic sensibility which informed his design decisions. With this natural talent for design, the fact that he never studied architecture at a university never seemed to hinder his architecture. Shortly after graduating, Nervi went to work for a construction company, but left after a few years to co-found the building firm Nervi and Nebbiosi, which would later become Nervi and Bartoli. [1]

Despite his bold designs, Nervi's approach to design was fairly practical. According to the Pier Luigi Nervi Project, "Nervi based his work on sound design and construction experience and on an intelligent intuitiveness, with a permanent intense attention to the relationships between structure and shape." [2] The architect developed a method of building scale models to test some of his more radical structural systems, and even won commissions (such as the Stadio Artemio Franchi) because of his ability to keep costs down. [1]

Reinforced concrete became the dominant material in many of Nervi’s buildings once he started his firm - and as he began his career, other architects and engineers were also gradually discovering its potential. However, what separated Nervi's work was his determination to use the material not only to create structurally sound buildings, but to express its beauty and use ingenious implementation methods to build to great lengths and heights.

Nervi first garnered major public attention with his work on the Stadio Artemio Franchi (1931), in Florence, Italy. With its cantilevered roof and elegantly winding stairs, the project announces the architect’s affinity for visually dramatic structural design solutions. Between 1935 and 1942, Nervi built a series of airplane hangars across Italy for the Italian Royal Air Force; although they were destroyed, these works were instrumental in establishing Nervi’s reputation as a design-conscious fusion of architecture and engineering. At the end of the 1940’s, he produced the Torino Esposizioni (1949), an exhibition hall in Turin which later became an ice hockey rink for the 2006 Olympics, and showcases Nervi’s ability to artfully span enormous lengths.

As Nervi’s career progressed, he brought his design approach to several different typologies and a variety of countries. In the 1950s, Nervi designed the UNESCO Headquarters in Paris (1950) and collaborated with Gio Ponti on the Pirelli Tower (1955-1959), bringing structural solutions to office buildings. Across the Atlantic, Nervi designed The George Washington Bridge Bus Station, a large sculptural concrete structure in New York City. Nervi’s portfolio developed, but he still maintained an interest in his ability to span vast spaces; the Palazzetto dello Sport (1961), a project led by Annibale Vitellozi for which Nervi designed a concrete dome, showcases the architect’s artistic sensibility present amidst challenging structural requirements.

Nervi produced some of his most well-regarded projects towards the end of his career. The Cathedral of St. Mary of the Assumption (1971), produced with Pietro Belluschi, and the Paul VI Audience hall in Vatican City (1971), bear Nervi's flair for producing monumental buildings through imaginative structural systems. By learning from decades' worth of projects and merging knowledge from several disciplines, Nervi's later designs reference many of the innovations he developed earlier, channeling a more powerful sense of ambition for structural achievement than ever before.

See works by Pier Luigi Nervi featured on ArchDaily by clicking on the thumbnails below: 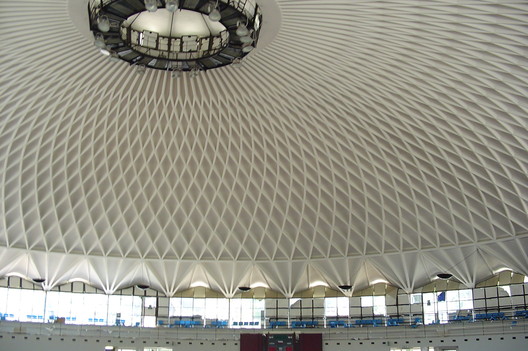