Last week, after a month of speculation, BIG unveiled their plans for New York's Two World Trade Center, replacing Foster + Partners' design which although started on site, was stalled due to the financial crash of 2008. With the building's high profile, in just one week BIG's design has been the subject of intense scrutiny. In this interview, originally published by New York YIMBY as "Interview: Bjarke Ingels On New Design For 200 Greenwich Street, Aka Two World Trade Center," Nikolai Fedak talks to Bjarke Ingels about the design of the tower and why it was necessary to replace the scheme by Foster + Partners.

YIMBY sat down with Bjarke Ingels to talk about his firm’s design for 200 Greenwich Street, aka Two World Trade Center. Despite public outcry following the change from the Norman Foster version of the tower, BIG’s innovative and forward-thinking building will truly respond to the human needs of its tenants, while also punctuating the Downtown skyline with a 1,340-foot take on a classic ziggurat. We’ve also obtained a few additional renderings of the soon-to-be icon’s impact on the cityscape. 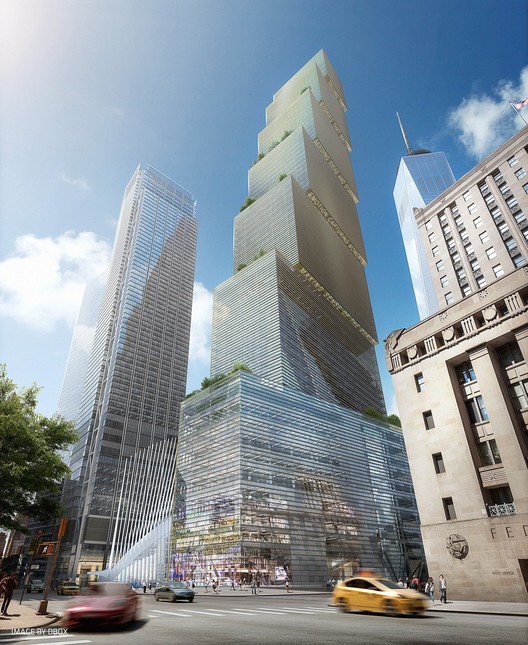 We tested out various kinds of massing — different types of logic — so we ended up saying it’s ok that the building’s components have different proportions, and are then stacked on top of each other. It actually has an inclination towards One World Trade Center, so the two towers — even though they’re not twinning — by having a mutual relationship, the space between them is parallel, although at an incline.

From the memorial, Two World Trade is really one of the group of towers; it has a vertical corner, but then it has an almost leaning aspect to it. It feels like it’s a completely straight-forward tower, but then there’s something weird going on, that it seems to lean with One World Trade Center.

NYY: What do you think of the negative commentary regarding your design versus the Foster design, and what are the positives when comparing the new building to what was formerly planned?

BI: It’s a city of millions, you’re going to have a million different opinions. I’ve read a lot of really positive comments as well. But I think what’s important is, basically when 9/11 happened, it created this migration away from the Financial District, at least for all the financial firms. And then the financial crash of 2008 happened, emptying out even more space. Basically [the Foster tower] was designed as a bank, with the same floor-plate on every single level, until it would’ve had stranger floor-plates up at the top — it was also designed with a sky lobby, which means if you’re working in the upper half of the building, you have to change elevators.

NYY: And this doesn’t have a sky lobby?

BI: No, it’s the same all the way up. If you’re working on the 60th floor you don’t want to change elevators every trip up and down. The reason it’s tempting to propose a sky lobby is it allows you to slim the core at the bottom and have the same core all the way up, but it’s inefficient because everyone has to change elevators twice. So I think that may have also contributed to the old design not getting built. I think what we’ve tried to do is design a building that looks different because it performs differently; it’s the changing proportions of the different floor-plates that means a lot of different companies with a lot of different activities can happen within the same building.

It has the diversity of a neighborhood, instead of duplicating a floor-plate X number of times. And then I think the fact that you have abundant outdoor spaces means that working in the building — not only will we dissolve the segregation between one floor and the other with the cascading voids, where people can see their colleagues four floors down, but you can actually extend your work out into the outdoors, so you can have phone-calls or meetings or lunches on terraces, 600 feet up, under the shadow of a tree, enjoying the fresh air.

NYY: This would be the first tower in New York that cantilevers several times over, right?

NYY: What are the plans for lighting and will it have any sort of iconic scheme?

NYY: When did you start the design process?

NYY: How much retail space is it going to have?

BI: About 50,000 square feet, on the first three floors plus the ground level.

NYY: How was translating a partially built building into your new design realized?

BI: It’s one of the main challenges — to land on predetermined locations. It’s like playing Twister with a 1,300-foot tower.

Basically we placed the cores where they want to sit, and then they come down, and we see the architecture of translation, as they distort to reach from one position to a predetermined rod; the same with the columns. That means that the lobby is going to have very expressive architecture but it’s purely out of trying to connect the dots.

NYY: How do you deal with New York’s climate when it comes to landscaping the outdoor space?

BI: We’re looking at having different landscaping on each of the terraces, from lush climates on the lower levels, ending up with almost an arctic tundra. You will have different average temperatures and different conditions — in the Highlands, for every 200 meters or 600 feet, you drop about a degree. So the difference should be about two degrees [between top and bottom temperatures].

NYY: Can you describe the facade?

BI: For the facade we looked at this idea of relating to our neighbors, but also from inside you want transparency. And from the outside, texture, and materials that patina, or have warmth. We’re looking at the idea of a shingle, both vertically and horizontally. It’s facing away from the southwest corner, so from that perspective it’s an all glass tower. But from the east or north, you can see the material of the mullion. The same is true when you look from below — you can see the mullions. So from the inside it gives you two different feelings.

NYY: The news ticker is going to be underneath?

BI: Yes. Normally we refer to the roof as the fifth facade, but this will be the sixth facade, on the underside of the building. It’s a very active and lively building towards the rest of the city, but formal towards the Memorial. As you get distance, it recreates the twinning, not by having two identical buildings, but by having siblings. They both lean at the same angle, which means the space between them is parallel even though it’s sloping.

NYY: Have you heard anything regarding the Performing Arts Center?

BI: I think details will be coming on that soon, but we’re not working on that.

NYY: Last question: will this be the tallest building you design in New York?

BI: Only time will tell.