Born in Chaco, Argentina, Ambasz knew from an early age that he wanted to be an architect. According to a 2009 article in Architect Magazine, so great was his determination that at age 16 he worked for an architecture firm during the day while attending high school during the night. [1] Ambasz also had an appetite for education graduating from Princeton with a Bachelors degree and then a Master of Fine Arts in Architecture just a year later. His jump through the ranks of architectural academia led him to a brief career as a professor, but his work quickly brought the attention of scholars and professionals alike, and by age 25 Ambasz was working as the Curator of the Department of Architecture and Design for The Museum of Modern Art (MoMA) in New York City.

While at MoMA, Ambasz curated several critically acclaimed exhibitions, including “Italy: The New Domestic Landscape,” and “Universitas.” Curatorial duties provided Ambasz with an opportunity to investigate broad societal questions in a very public setting; in “Universitas,” Ambasz organized a collection of work which asked how universities should address nature from an educational perspective. Seemingly energized by the fields he was researching, Ambasz left MoMA in 1976 to establish himself as an industrial designer.

As an independent designer, Ambasz had even greater success; the Vertebra chair, which he developed with Giancarlo Piretti, was one of the first office furniture to emphasize ergonomics over aesthetics. Ambasz’s architectural projects take a distinctive approach to design: within his works, nature must interact with the structure in a way he calls “green over the gray.” [2] In many of his projects, this idea manifests itself through green roofs and gardens built into the projects. His projects, such as the Cordoba House (1975) the Lucile Halsell Conservatory (1988), and the Fukuoka Prefectural International Hall (1994) combine nature with a sensitive response to clients’ needs and the architect’s desire to create compelling images. More recent works, such as the Banca dell’Occhio (2008) and Museum of Modern Art and Cinema (2010), continue this trend. By using this approach and executing it with ecologically friendly design elements, Ambasz demonstrated that sustainability could produce architecturally compelling buildings.

Unifying the many occupations Ambasz has held during his life is a deep love of creativity. Ambasz offers poignant insight into his career in a quote to Architect Magazine:

See Emilio Ambasz's works featured on ArchDaily via the thumbnails below, and further coverage of him below those: 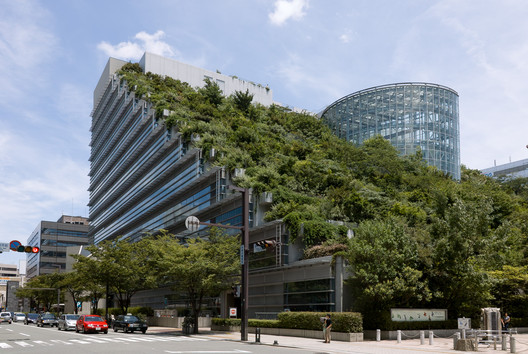