The international response to the Syrian War has often struggled to deal with the sheer scale of the disaster; huge numbers of refugees find it difficult even to source the barest essentials for life in the enormous refugee camps that have sprung up in Jordan, Lebanon, and elsewhere. Alongside the overwhelming need for basics, longer term care for displaced Syrian citizens is also proving difficult, but CatalyticAction, a not-for-profit design studio who are in their own words "a group of young graduates who believe that small changes can realize a big impact," believe that this long-term provision is equally important, especially for children.

Providing a sense of normal life for children in the refugee camps is absolutely essential to helping them, and their families, to recover and cope with life as refugees, which this why CatalyticAction have begun crowdfunding the construction of a playground - designed with the help of refugee children - in the Lebanese town of Bar Elias. The playground would allow children to learn through play, provide a sense of normality and, importantly, should create a space that they feel safe in. 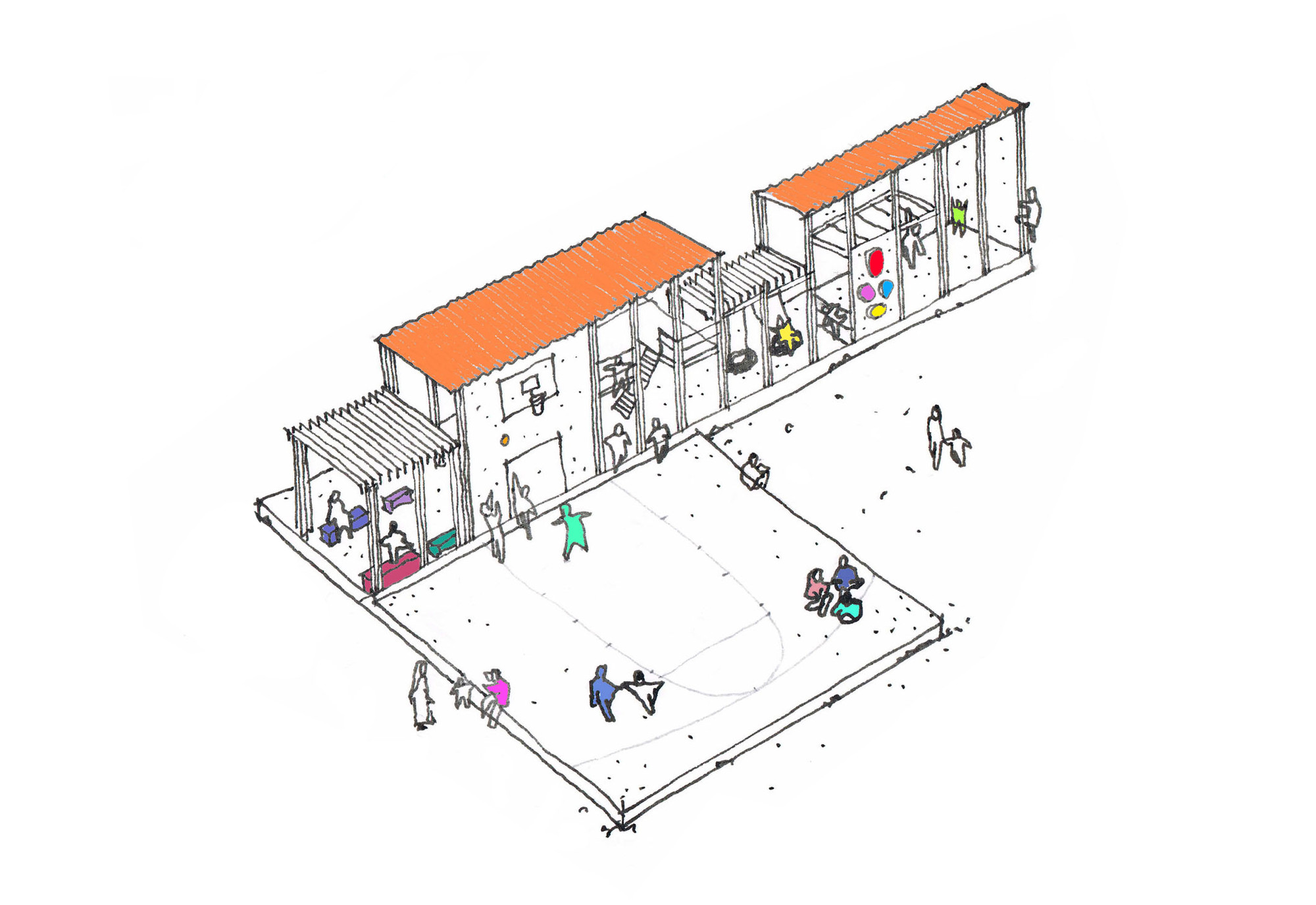 The playground can be built out of easily available and recyclable materials and is flexible enough in design that it could in future be easily adapted to other schools, camps or informal settlements with at-risk children. A detailed explanation can be found on CatalyticAction's crowdfunding page on IndieGogo, but we were lucky enough to ask them some questions about how this playground was designed, what they hope it will do and why it should be supported:

ArchDaily: Could you elaborate on how your design creates an environment that is both safe and a vehicle for learning architecturally?

CatalyticAction: The playground is conceived as a hands-on learning space providing active, relaxing and educational spaces. The central active element of the playground is a basketball/football pitch, that also works as a platform to host different performances and awareness events. The other alternating active spaces contain swings, a slide, monkey bars and a seesaw. Stemming from the field observations, shaded gathering spaces will also be provided throughout the playground design. It is within the details of the space that educational, cultural and sensory elements are introduced to enrich the playground’s environment and initiate creative movement. Some of the examples we are exploring are: a tactile wall embedded with sea shells to enhance sensory and environmental awareness; a chalk board wall to inspire creativity and self expression; installing pulleys and baskets from different levels so children can use them to transport things to each other; as well as installing weather pin wheels so that the children can learn about the direction of the wind and different poles. This will be our main focus during the second building phase (workshop 2), where participatory art is a main focus; as well as the participation of the children in the building process.

The playground is a space that had to be designed so that it is quick and simple to assemble, but then also needs to be easy to disassemble and reassemble if the refugees in this settlement are to be able to move back to their homes in the near future. In many ways it challenges the notions of what should be delivered in emergency situations and re-prioritizes children.

ArchDaily: Was there a general consensus from the children as to what they thought of as a safe space? Did what they propose surprise you?

CatalyticAction: The children were able to participate in creating the design during exercises conducted in the Nahreya School in March 2015. Two classrooms from each shift (morning and afternoon) engaged in the exercises where they communicated what they desire to have in the playground that hopefully would be provided in August. [For more information about the participatory exercises see CatalyticAction's blog, here.] Children in the Telyani Informal Tented Settlement were also able to participate through story telling exercises.

The safe space they described was somewhere that could be enjoyed as a collective, with their families and friends; it was also green with flowers and trees. For many children the school already presented a safe and favorable place to be in. Some of the surprises we encountered were:

The children were very enthusiastic about the project and seemed to enjoy the creative activities a lot.

ArchDaily: How did you translate these needs into a design framework for the playground?

CatalyticAction: The participatory exercise was a fundamental step for the development of the design. The observations coming from the two exercises we conducted were combined with the specifics of the site such as materials available, and the requirements of the local partners and school teachers, in order to produce the preliminary design to be used for the fundraising. The children’s input helped in particular to shape the elements put in to the playground and the kind of spaces they require to play the games they told us. The final design will come only with a further design-build participatory step that will be conducted in August with the children and the workshop’s participants.

ArchDaily: What drew you towards this project in particular? Where do you see both your practice and projects like this in the future?

CatalyticAction: The project started after opening a dialogue with our local partners, AUB’s Center for Civic Engagement and Community Service and Kayany Foundation. We visited the school sites built by these partners as well as the Informal Tented Settlements around in the area of Bar Elias, in Lebanon. Our observations of the children’s behavior, as well as the site in general, made us feel that there was a lack of opportunity space dedicated solely to them. A space that would simply allow them to be children; such as a playground!

The schools already offer one such safe place for the children and they showed great appreciation of this; developing a unique relationship with the teachers of Kayany schools. After this trip we set about researching for ourselves about the benefits of a playground and the rights of children. We learnt about the psychological benefits of play and the project unraveled from there.

The playground project is a pilot that will hopefully act as a catalyst triggering longer-term goals to impact positive change for the personal and psychological development of the children. We work to intervene with projects that catalyze change in society through design practices, community engagement and understanding the specificities of different contexts. We have also started a dialogue in Mathare slum in Nairobi, Kenya to develop a beekeeping facility for economic and social empowerment [See CatalyticAction's site, here] and are also looking at opportunities to take our playground concept further.

CatalyticAction's fundraising on IndieGogo lasts until the 13th June, 2015, and can be viewed and donated to on IndieGogo.