Save
A Country Of Converted Oil Rigs: Is This How To Save The Maldives?
Share
Or
Copy

If you want to see the future of urban adaptation, head to the Maldives. That’s the message and warning behind Mayank Thammalla’s master's thesis from the Unitec School of Architecture in Auckland, New Zealand. Under even the most conservative IPCC forecasts, the low-lying Republic of Maldives will become almost uninhabitable as sea levels rise, while any further rise could leave many of the 200 inhabited islands underwater. It’s an existential threat like no other - in as little as ten year's time, the Maldivian government could be faced with the impossible situation of deciding how to deal with over 400,000 refugees leaving the area where their country used to be. Instead of attempting to rebuild the Maldives elsewhere or mount a series of defences against the oncoming sea, Thammalla’s research project has the difficult goal of realistically preserving Maldivian life in the same geographical location as it is now. His solution? Semi-submersible oil rigs. 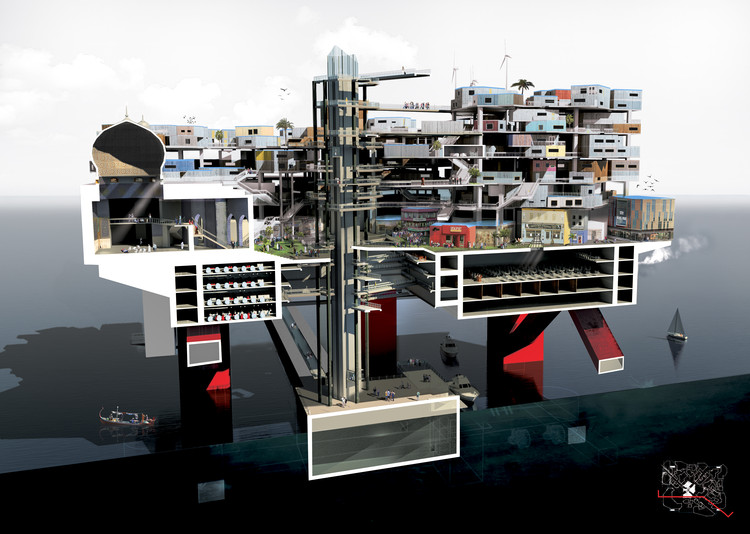 The Maldivian government, well aware of the threat posed and one of the leading voices in the international effort to ameliorate climate change, has proposed plans to buy land in countries like India or Australia in order to form a republic-in-exile. It’s an acceptance of defeat, but little else remains to the Republic - if the kind of coastal defenses the Maldives need are even possible, they’d likely be unaffordable without the somewhat unlikely prospect of major international backing. But the Maldive culture and identity, more than 2000 years old and a unique combination of influences, is more than worth defending.

Thammalla’s proposal, entitled “Swim or Sink”, argues that not only could the entire population of the Maldives be realistically housed on a series or more or less generic oil rig templates, but that these rigs could also be adapted to support the existing Maldivian culture. Starting with a rigorous assessment of both the socio-cultural structure of the Maldives and the semi-submersible oil rig template, Thammalla has attempted to reconcile the two concepts into a unifying plan that recreates the qualities of the current capital of Malé, using similar enclosure-to-open-space ratios to provide familiar feeling spaces for the inhabitants. The plan goes even further to integrate Maldivian history, proposing the use of once-common traditional materials of coconut timber for the housing units in order to try and provide a link with the past that even modern Malé fails to do.

The idea of relocating an entire country to an oil rig is less outlandish than it may sound. The Maldives, and Malé in particular, are already incredibly densely populated, with an estimated 1,102.5 people per square kilometre. Initial attempts to create a more open plan on the rigs failed due to a lack of density; it was re-creating Malé that created a successful prototype, and all this would be housed a rig that could integrate meaningfully with the surround marine environment while also being safe from rising seas or tsunamis that have in the past wiped out up to 62% of the country's GDP overnight, not to mention killing nearly 100. As Thammalla himself says, the project “positions itself that one cannot put value on life.”

But it’s value that also provides the biggest challenge to this project: although the proposed rigs seem a relatively cheap and flexible way to house a population in a hostile environment, providing housing alone isn’t enough to sustain a country. As much as 30% of the Maldivian economy comes from tourism drawn by white sand beaches and tropical resorts; it’s unclear whether a converted oil rig would have the same draw. That said, in a political climate where resettling a country to somewhere like Australia would prove tricky at best, Thammalla’s proposal arguably represents the only way to preserve the the Maldives as a distinct cultural entity. When a country faces a threat so total and so radical, maybe the best solution is one that’s equally radical?

NewsArticlesClimate ChangeThe MaldivesMaldivesUnitec School of ArchitectureMegastructureClimate change
Cite: Dario Goodwin. "A Country Of Converted Oil Rigs: Is This How To Save The Maldives?" 23 May 2015. ArchDaily. Accessed . <https://www.archdaily.com/634314/a-country-of-converted-oil-rigs-is-this-how-to-save-the-maldives> ISSN 0719-8884