Text description provided by the architects. The design of the Lina em Casa: Percursos (Lina at Home: Journeys) exhibition was developed with the intention of preserving the spatial experience and the unique atmosphere of Casa de Vidro (Glass House). Understanding the House as the principle legacy of the architect on display and a major object of interest for visitors, the organization of the exhibition stands avoids creating spatial subdivisions that could detract from the building’s architecture.

The organization of the exhibition stands is free, allowing visitors to take various non-linear paths through the exhibition's content. The rounded steel exhibition display searches in its minimal materiality to maintain transparency so that the stands do not become visual interruptions. Two typical forms define the modular composition. The first module is a cube. The second, a vertical one, has the frontal dimension of a door, and a minimal depth to maintain free-standing stability. Within the structural frame, acrylic boxes and panels are suspended. In them, original drawings, documents, photographs, objects and text alternate.

The modular stands can be disassembled, stored and rearranged for future exhibitions. This exhibition marks the re-opening of Casa de Vidro to the public, possibly as the first of many other events and exhibitions that will reveal Lina Bo Bardi's great archive, currently stored in the House. Displaying Lina Bo Bardi's valuable legacy in an exhibition is challenging to address in the proposition of an installation in her own home. The design proposed doesn’t attempt to mimic strategies, but searched to find in the House itself the suggestion of a design concept, respecting the architectural language already present, and highlighting it without obstructing its perception.

The exhibition content, curated by Anna Carboncini and Renato Anelli, was developed in parallel to the design concept. Lina em Casa: Percursos gathers texts, photographs, documents, sketches, letters and objects that present the intellectual trajectory of Lina Bo Bardi. It is part of an initiative by the InstitutoLina e P.M. Bardi in celebration of the architect's birth centennial. 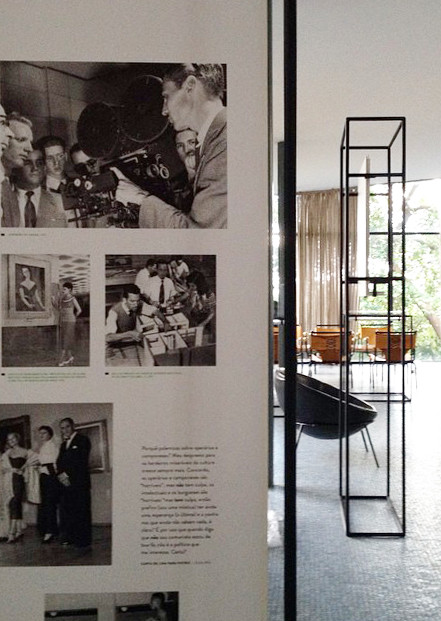