Save
Rehabilitation of the National University Library / ANMA 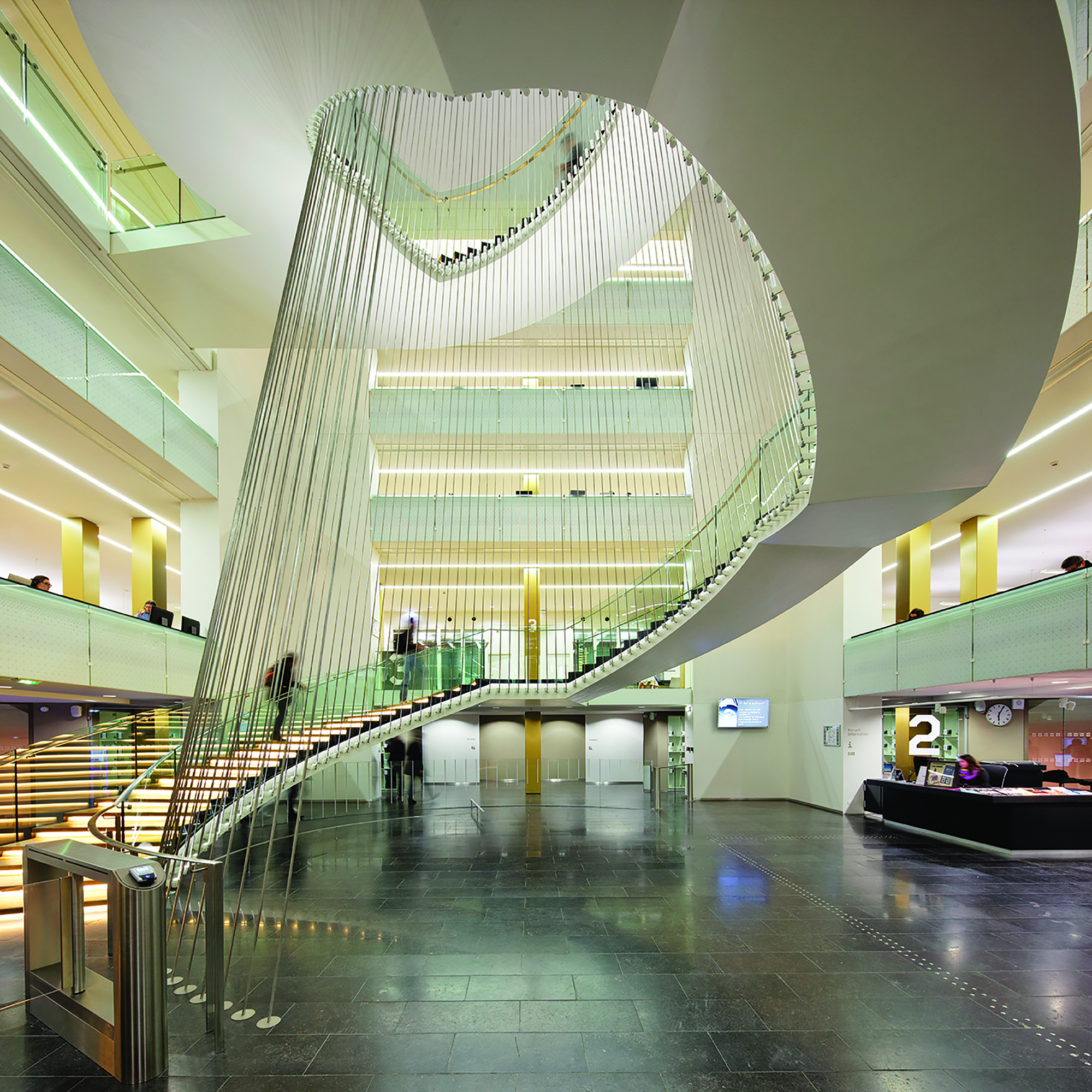 Text description provided by the architects. The original architecture of the National Strasbourg University Library (BNU) was wilhelmian and reflected the historicism of the late 19th century with its symmetrical design and its very square layout. Rehabilitation work in the 1950s hid part of the strong point of this initial design. The third phase carried out between 2006 and 2014 was a return to basics. The original central design has been restored, and the relationship between interiors and exteriors reactivated. Above all, the dome has been highlighted by a central staircase that is bathed in very carefully studied light. Both a symbolic and structural element, it returns to a form of monumentality shed of the triumphalism of its beginnings.

A revival of the spirit of place

Strasbourg’s National University Library (BNU), located in the city center, is a prestigious building of the German-occupation period (1871). For its rehabilitation we wanted to scrupulously adhere to its monumental architecture. The project thus emphasized the facade’s characteristic molding and magnified the dome by making it visible from all interior levels.

The new spaces have been clearly differentiated from the existing structure by using a specific architectural vocabulary. The three main spaces (reception, passageways and reading rooms) have been treated with distinct plasticity that creates a dialogue with the monumental architecture. The operation relied on the one hand on removing parasitic elements that interfered with a reading of the original quality of the volumes, and on the other, on building a vertical movement system and creating new functional floors. The objective in removing the parasitic features was to make the volumes under the dome accessible and visible to the public, including the non-reading public. The library’s identity is embodied in this exceptional volume.

The monumental staircase lies at the actual and symbolic heart of the rehabilitation. Its 27 meters give access to each of the library’s floors from GF+1 to GF+5 (at 12.04 m). Composed of 120 12/12 mm stays, the staircase rises in a spiral that unifies the building and simplifies how it is read. Above all, it helps reveal the building’s original dome, thus conferring on it its former glory. More than just the primary function of facilitating human movement, its 78 steps become landings where people can meet.

So as to provide ambient quality that encourages reading, working and conviviality in the cleared space, four platforms have been created in the perimeter around the great atrium. Replacing the former platforms, this arrangement frees up the comfortable heights under the ceiling for spaces accessible to readers. Vertical traffic hubs have been placed in the corners of the new platforms. These corners, corresponding to the four former courtyards, have thus become the nerve centers for the efficient functioning of the new library. They thus liberate the major volumes intended for the public from technical contingencies and safety. This arrangement enables comfortable working conditions for the staff and provides visual comfort for the big public platforms.

A complex and subtle job

The challenge of this major rehabilitation operation was dictated by maintaining the facades with their original joinery elements in the roofs and the dome, the reasons why this late 19th-century building has been classified as an historical monument.

Except for the courtyards located on the dome’s perimeter, filled with new floors, all of the building’s closed and covered parts have been preserved, which called for a methodological approach for the evacuation and supplies required for the job, the only access being the public one on the ground floor.

In contrast to the outer envelope, all of the structural elements and interior partitions have been transformed to meet the functional requirements of a 21st-century library and modern- day regulations. Wisdom dictated that work should start on the three exterior wings housing the book stores. So as to maintain stability, the existing floors composed of cast-iron posts and slab beams were methodically replaced by a new structure composed of mushroom posts and concrete floors poured on site. The whole made it possible to meet the new requirements for compactus storage and the seismic resistance of the walls and preserved facades.

Two-level stores have been preserved as examples of how storage methods have developed over the years. . The existing structure of these two stacked levels hangs from metal rods inserted inside the cast-iron posts and is attached to a new metal, fire-stabilized structure, installed on the last level. The Lipman (1895) and Strafor (1950) shelving has thus been preserved in their original setting.

The project removed the dome’s double, load-bearing structure which was composed of stone walls and very thick bricks. The job therefore began by installing the new metal structure on either side of the exterior wall. At the same time the installation of monumental scaffolding made it possible to completely free the existing structures of their constraints by jacking up the dome a few millimeters.

Big concrete blocks and double metal posts in the atrium’s corners henceforth support the dome and all the concrete floors that extend around the edges on five levels. The four stairwells located in the corners of the former inner courtyards also ensure the bracing and seismic stability of the whole. While the dome was being renovated — with the removal and relaying of each copper sheet — and the installation of the new atrium window with its brass ribbing, a new metal frame was added to the existing one so as to be able to hang the monumental staircase from it.

This major element, coiling around aconic space with an 8.10-m inner radius, was built in segments in the form of box beams in the workshop. Once the landings were attached by sealed inserts to the concrete floors, the flights of stairs were soldered by sections on the spot before being hoisted up to 12 meters. The whole was then hung at 27.5 m from the square base of the dome’s spire by a set of 120 12/12 brushed stainless-steel cables. Its shape was obtained by installing a circular ring at the confluence point of two conical revolutions. Located on the second floor from the Place de la République, the staircase leading to the atrium required that the under-pinning of the straight feet of the arches that characterize the prestigious main reading room had to be shored up. The arches were encased in a metal structure thus freeing up space on the lower levels.

The heat pumps connected to the water-table are located under the rafters of the three storage wings. All fluids are distributed only vertically through the empty space created between the stores and the atrium’s new peripheral floors, thus making it possible not to have any impact on the height under the ceilings of the various spaces limited by the dimensions of the facades’ existing windows. 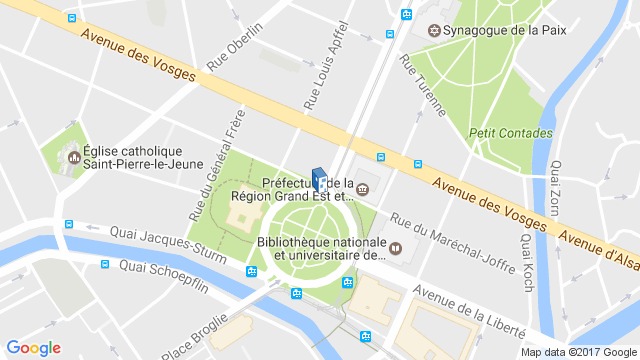 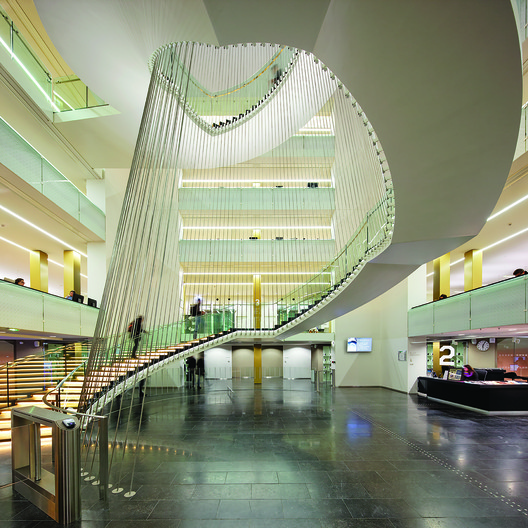