Chilean architects República Portátil have revealed their proposal for temporary multi-residential housing in Concepción, Chile. Responding to sites left vacant in the wake of the 2010 Chile Earthquake, the Vertical Student Housing project would accommodate students and members of the general public alike.

Driven by a desire to "promote interaction and relationships among strangers," República Portátil frame the housing project as a counterpoint to "standardized real estate projects" which, in their view, encourage "social segregation of the city."

The proposed site for the Vertical Student Housing project is bookended by two existing residential zones and located in the centre of the city. A compact footprint of 605-square-meters has previously precluded the site from commercial development and forced República Portátil to be as efficient with space as possible.

It is envisioned that the project will accommodate members of the high student population of Concepción, and the "temporary user... who generates little roots and is able to live in small spaces." The proposal relies upon the capacity of both its site and residents for adaptation, and targets those "who [bring their] life in a suitcase."

In a practical sense, this notion is manifest in a series of separate volumes unified by shared spaces for circulation and socializing. Private living spaces are stacked and arranged within a timber scaffold and topped with PVC A-frame roofs that allow ventilation and sunlight penetration. Common spaces between dwellings are used as recreational areas, and for utilities such as shared gardens and clotheslines. República Portátil emphasize the "development of relationships between strangers", and reframe daily activities as acts of social gathering.

Translucent insulating membranes reduce solar gain, particularly when combined with high ceiling heights and mesh shading along the north side of the structures.

An economy of space pervades the project; at a large scale with the multi-residential structures and at a smaller one in the individual rooms. Furniture is wall-mounted and multifunctional, and sleeping quarters tucked into the attic space of each residential unit.

If realized, the project would comprise 12 four-story multi-residential structures, and house students from the 23 nearby educational institutions. 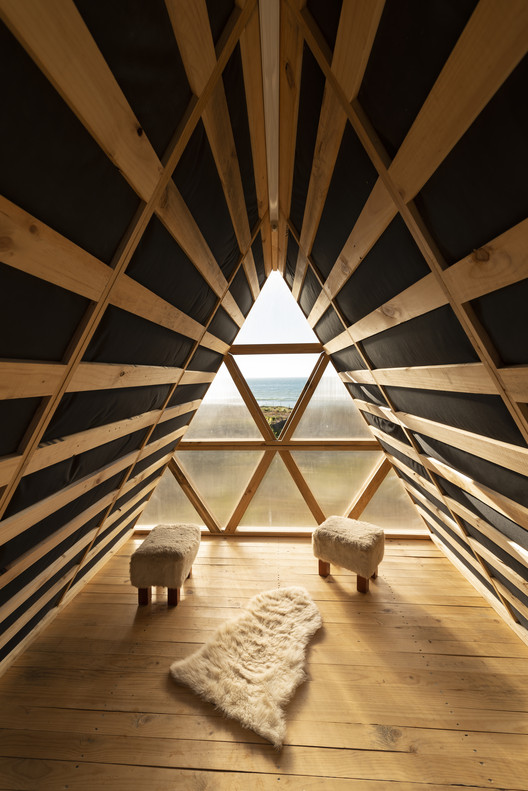