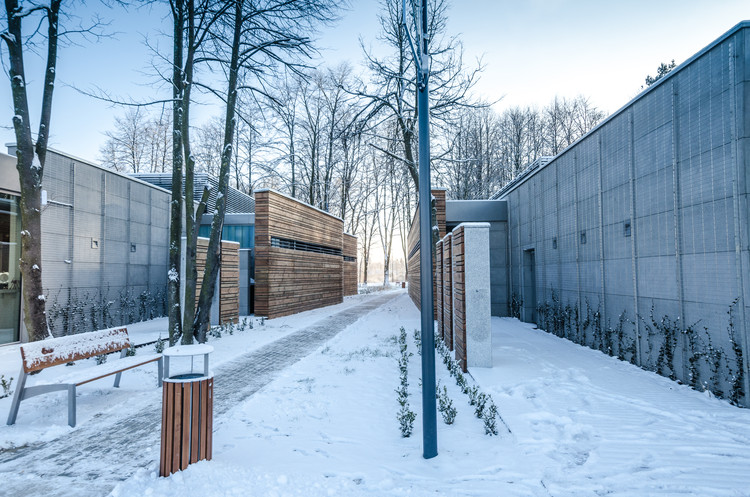 Text description provided by the architects. Olsztyn, known as "the capital of 1000 Lakes," currently has 16 lakes, whose potential, however, hasn’t been so far fully utilized and whose impact on the city life and tourism has been relatively small due to the lack of proper base and facilities. Implemented as the winning scheme in the Polish national architectural competition by a consortium of three studios, DŻUS G.K. Architekci, Spapa and Re-studio, the project named “The construction of all-year-round sports and leisure infrastructure by Lake Ukiel in Olsztyn” is the outcome of a years-long demand for “opening the city to lakes."

What has emerged as a result of the project is Poland's largest lakeside beach, with a restaurant, cafés, sports fields, numerous piers and lounge terraces. The entire center is picturesquely located in the heart of lakeside woods and surrounded by the convenient system of walking and cycling routes. The center has been included in the functional layout of the city thanks to public transport and a new system of access roads with plenty of parking space on the edge of the center premises.

The first ever-built city beach center was designed based on the vista of the main entrance, which is extended with the pier and the pierside building “E,” where you can find a water equipment rental and emergency services.

All the buildings are away from the shore and have been composed into and adjusted to the existing forest stand for a maximum sandy beach area. Also, the buildings are perpendicular to the shore so that there is maximum open view of the lake from the main traffic routes. In order to visually integrate the buildings with the landscape in the best way possible, most roofs were designed as green, i.e. they have natural greenery, and the walls were covered with the tailor-made wooden elements or equipped with nets which will be covered with greenery in the future. In addition, to obtain more recreational area and provide a better view of the panorama of the lake, some roofs have been transformed into lounge terraces.

Due to its function, the main beach building intended for emergency services and a water sport equipment rental is located on the surface of the lake. Its slender structure, which complements the viewing and compositional axis, is further extended by two-level piers. The upper pier is a big observation deck ideal for organizing public events and watching lake sports competitions, while the lower pier is geared with bays for emergency services units. Due to the direction of winds, the wooden screen bridging the two piers provides partial wind shelter for rescue units and teams moored here. At this level, there is also a patent slip for floating the units directly from the building.

To visually reduce the size of the extensive store building and to display the water equipment stationed on the lake, the store is fully glazed. Apart from it being an additional aesthetic value, since the boats are constantly on display above the water surface, it is also a convenient solution that makes it easier to find the store and identify its function.

On the floors above, the most of which is also glazed, there are observation and training facilities for lake security and safety staff. The walls of the auxiliary rooms are covered with white laminate, which is identical to the color of boat hulls which are moored here.

The beach center also involves a restaurant, cafés and cloakrooms. Due to the fact that it is all-year-round infrastructure and more than ten thousand people are going to visit the facility daily in the summer season, all elements are made of highly vandal and weather resistant materials. The facade is covered with Siberian Larch as well as concrete with nets for vegetation, lounge terraces and piers are made of azobé, also called red ironwood, and stainless steel fittings are used in the buildings.

This was the first attempt to implement such a comprehensive project involving a large water reservoir and to build such a versatile all-year-round sports and leisure facility that will fundamentally change the large area of the city and will become a key factor in enhancing Olsztyn’s tourist appeal. 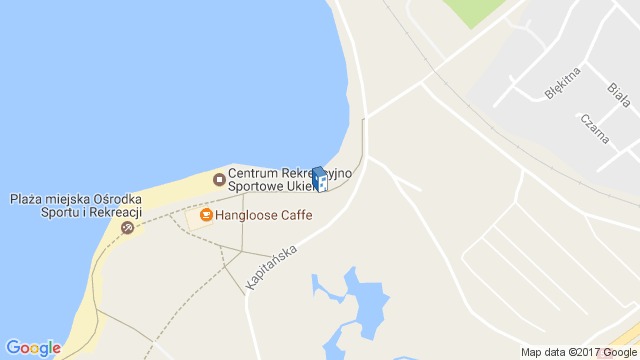 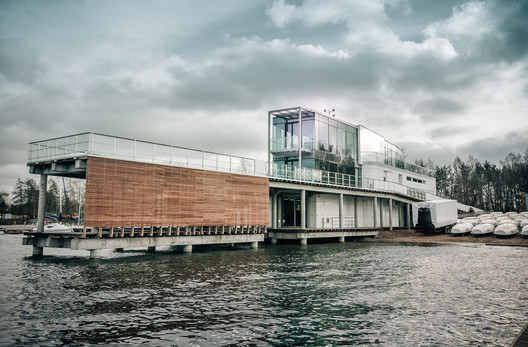 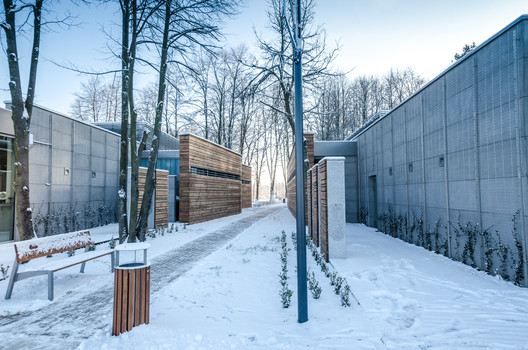