Save
AA DLAB 2014: The Natural and Digital Worlds Combine With Root-Like "CALLIPOD" Pavilion
Share
Or
Copy

Created for AA DLAB 2014 - the annual summer workshop undertaken by the Architectural Association at their Hooke Park facility - the 4.4 metre wide "CALLIPOD" pavilion blends perfectly into the wooded surroundings, appearing as though the roots of nearby trees have sprung from the ground to create a dome in the depths of the Dorset woodland. However, despite its natural outward appearance, the process of creating CALLIPOD was highly technical, combining a detailed algorithmic exploration of form and structure with both digital and traditional methods of fabrication. 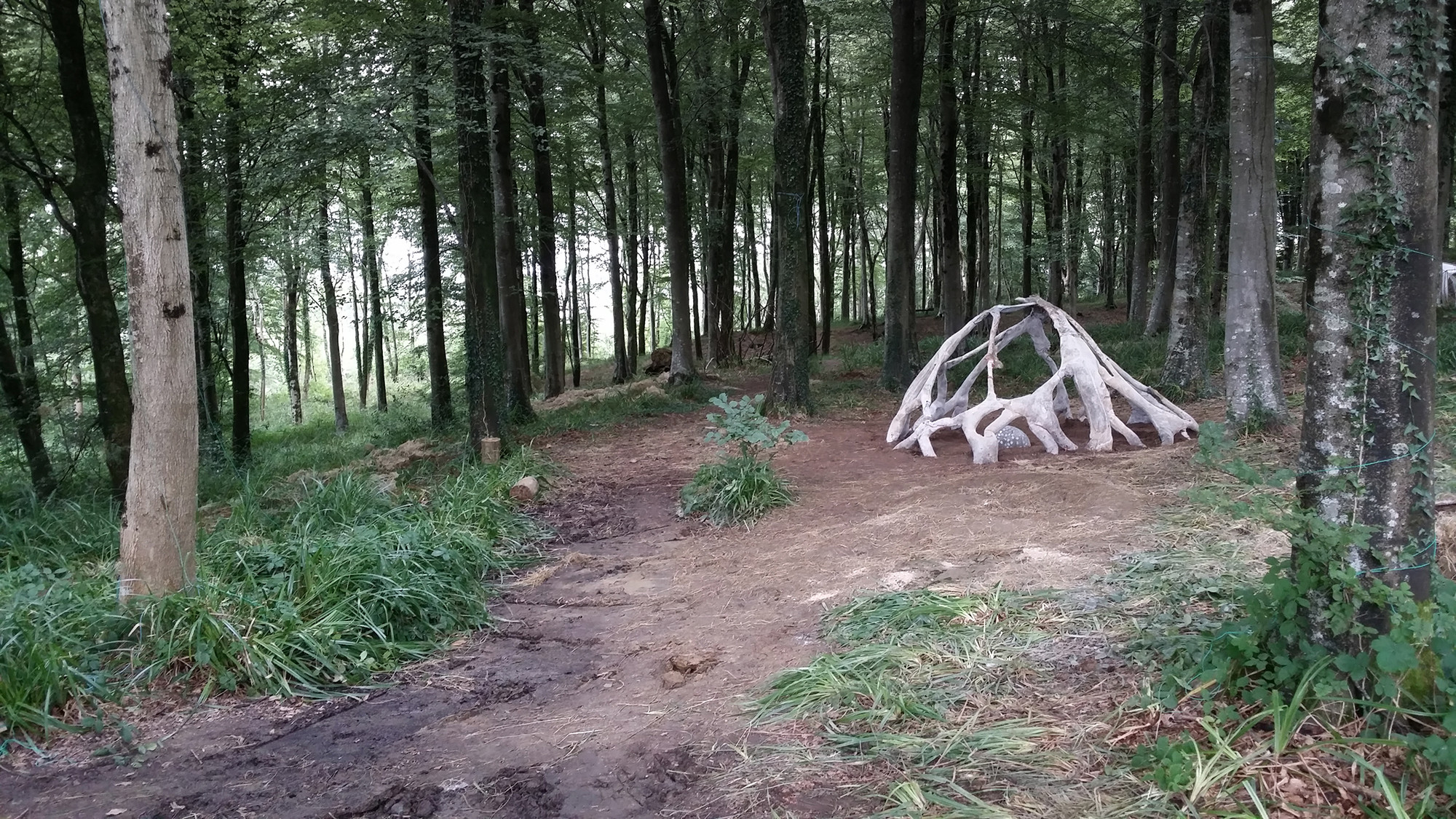 "Architecturally, the aim has been to combine a highly efficient, natural-like form with elements of traditional materiality and to create a structure that is sustainable, welcoming and culturally of its place," explain tutors Elif Erdine and Alexandros Kallegias. This efficient natural form was created by honing branching and bundling algorithms to emulate the patterns of tree roots, creating a variety of digital models that were tested for their structural efficiency via finite element analysis (FEA), using Scan&Solve in Rhino and Karamba in Grasshopper.

Once an optimal final form was determined, a CNC router was used to map the shapes onto fabric, which was then used as formwork for the concrete "roots." On site, the team used a simple earth scaffold to maintain the shape of the dome and a special concrete mix that would set in several hours, allowing them to remove the earth as soon as possible.

The result is a structure which, thanks to both its form and the surface patterns provided by the fabric formwork, perfectly blends with the natural environment during the daytime. At night however, a second component of the design takes over to bring an element of the unnatural: in the centre of the dome, the concrete seating plinth contains special pebbles which store energy during the day, releasing it as a cyan glow during the night.

"One of the main objectives of AA Summer DLAB 2014 is teaching the progressive interrelationship of different computational software that can enhance the architectural design," say Erdine and Kallegias. Certainly this has been achieved in the project's design, however the opportunity to construct the design at Hooke Park adds another dimension to DLAB's pedagogical scope. "Each sub-team had their responsibilities and the site was converted into a construction site, following health and safety regulations," add the tutors. "This part has always been an essential part of AA Summer DLAB as it allows for a better, hands-on understanding of the demands involved in a construction of a 1-to-1 scale model."

It is this ability to combine normally conflicting aims that makes AA's DLAB rare among architectural learning experiences. By simultaneously addressing competing principals such as the digital and the natural or the theoretical and the practical, as they have done with CALLIPOD, enables the program to realize its goal to "inspire the avant-garde of young architects and architectural students."