Although his name may not appear in most architectural history books, Sir Kenneth Hugo Adam has influenced architecture for over fifty years. Better known as Ken Adam, he has been responsible for the production design of over 70 films in his career, most notably for his work on the James Bond franchise. The architect of Fort Knox in Goldfinger, the Zero Gravity Satellite in Moonraker, and Super-Tanker Liparus in The Spy Who Loved Me, Adam has shaped architectural design in film since the 1940s.

Adam is the recipient of two British Film Academy Awards, including one for Dr. Strangelove, and in 2003 became the first film production designer to receive a knighthood. He has been at the helm of some of the world's most well-known and influential films – from Chitty Chitty Bang Bang to Crimes of the Heart – and his drawings are now on display for the first time. In 2012, Sir Adam donated his entire body of work to the Deutsche Kinemathek in his home city of Berlin, where the first retrospective of his work is now on display, entitled 'Bigger Than Life: Ken Adam's Film Design.' 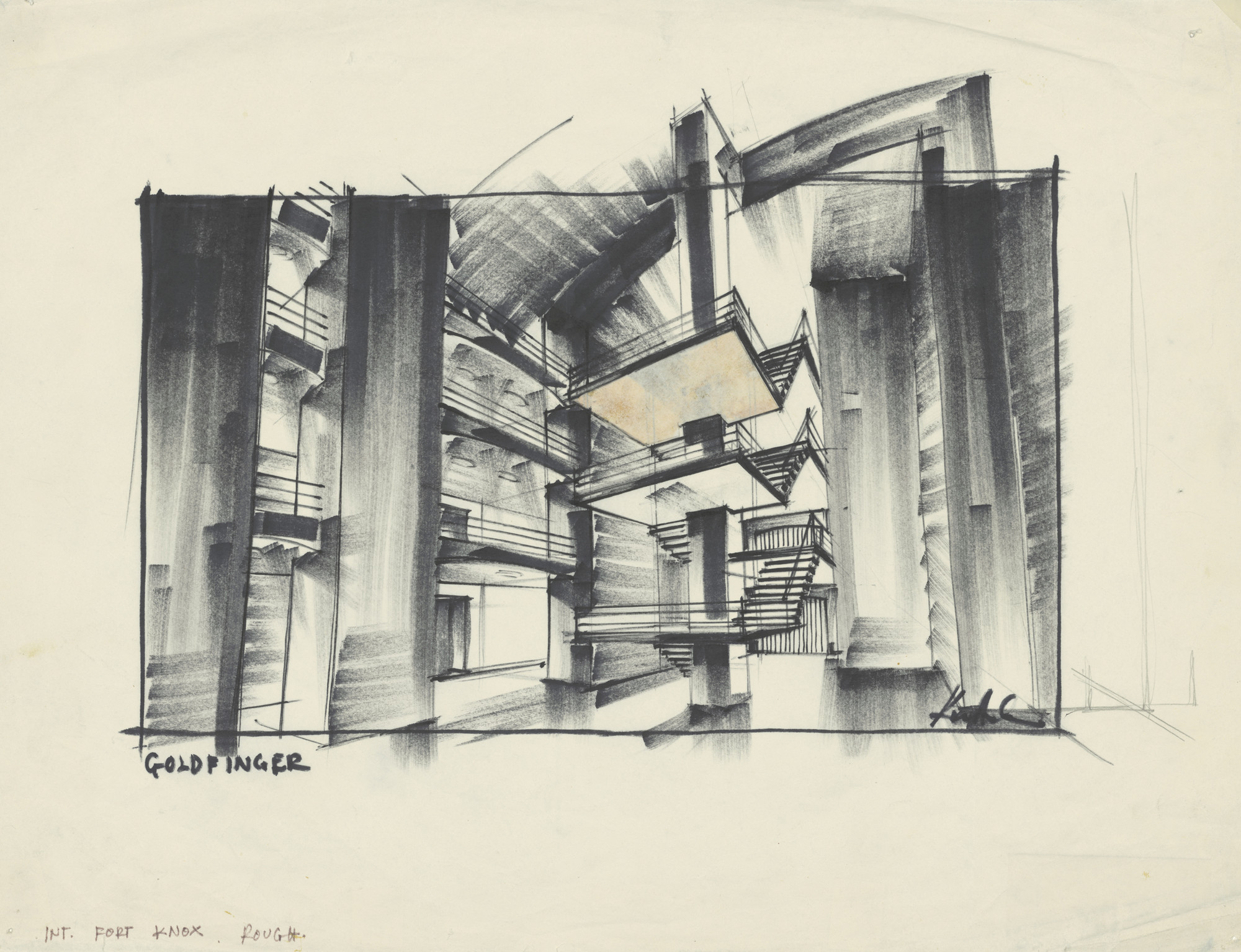 "Adam used his work to push the boundaries of what is possible – often highly emotionally, occasionally playful or humorously, and yet always believably," state the curators, Boris Hars-Tschachotin, Kristina Jaspers and Peter Mänz. A true draftsman, Adam's designs were never beyond the realm of understanding. His drawings convey a sense of unparalleled physicality that allow the viewer to escape reality in favor of the subterranean catacombs of Fort Knox or the intergalactic havens that defined James Bond's journey in Diamonds are Forever.

With an unstoppable desire to push architectural boundaries, Adam's futurist creations sometimes exceed even the most outlandish Calatrava and Hadid designs while maintaining a true sense of spatial understanding for the viewer. His accurate perspective drawings could incite jealousy in any architect, and his body of work includes over 4,000 hand drawn renderings. Speaking to the approachability of his designs, the Deutsche Kinemathek describes his work as "characterized by a very strong visual succinctness and ripple effect."

Sir Adam's expertise extends beyond futuristic designs, with extensive work on period pieces including The Trials of Oscar Wilde and The Madness of King George, for which he won an Academy Award for art direction in 1994. Adam has garnered significant attention from the film and architectural industries alike, and has exhibited his drawings around the world.

Based on a design mantra to create work that is “bigger than life," Adam's body of work reflects the honesty of a designer who realized his dreams, time and time again. Adam's work should serve as a reminder to architects around the world that creativity has immeasurable influence, and that boundaries are flexible given the right parameters. His work bridges generational and cultural barriers, proving that design of the fictional world has the capacity to affect the physical world.