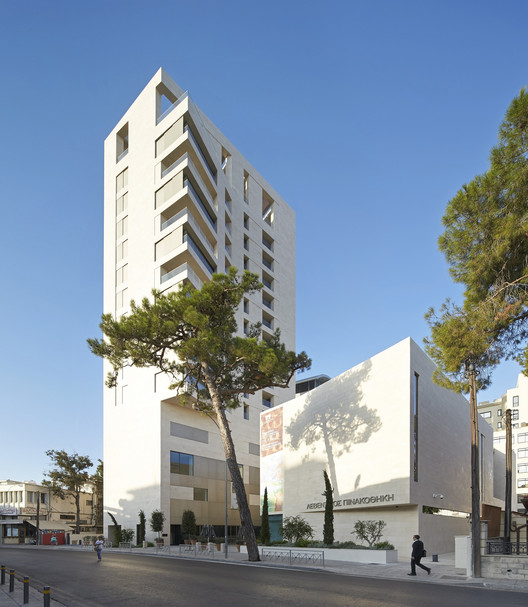 Text description provided by the architects. A new art gallery with restaurant and apartments for the AG Leventis Foundation, a private foundation supporting educational, cultural and philanthropic causes which promotes Hellenic culture. The eroded building form is inspired by the vernacular response to Cyprus’s climatic challenges, creating a tenuous play between solid and void and generating a series of courtyards and gardens, both public and private, which connect to the street and the spectacular views to the Pentadaktylos Mountains to the north and resonate with both ancient and contemporary quarters of Nicosia.

Creating a new cultural centre that embodies the personality of the family collection and also contributes to the regeneration of Nicosia has proved an interesting challenge. Carefully orientated openings provide views to the city, connecting the collection of art and artefacts to a broader cultural context. Daylighting from rooflights designed to exclude harmful UV, floods the galleries, the upper two stories of which are connected by light shafts.

Each apartment occupies an entire floor of the tower with balconies facing south, west and, interspersed with bays, north to the mountains. A generous living room/kitchen facing south, east and north provides a spectacular eyrie overlooking central Nicosia and a central spine of dark oak embraces service spaces.

Leventis is inspired by traditional Cypriot architecture of local stone with small, shuttered openings which exclude the fierce heat in summer but open to allow the winter sun to penetrate.We challenged the prevailing use of thin, open-jointed stone rain screens and set out to echo the homogeneity of the traditional stone buildings with their fine detail and tight mortared joints.

Local planning policies largely dictated the building footprint and the requirement for external space led to the creation of a courtyard embraced by the three storey gallery and open to the street.

The Leventis Gallery is located in a part of Nicosia originally developed under the guidance of Lord Kitchener in the late 19th century in the first wave of urbanisation outside the fifteenth century Venetian city walls. The site is adjoined by neighbours of different generations – from the two storey villas of the nineteenth century to commercial towers of the 21stcentury. Our building mediates between these extremes and heals the disjunction in the grain of the city and in Leonidou Street in particular.

The quarries which supplied the stone for historic Nicosia lie within the occupied territory so we have used Palestinian limestone which sits easily in its context.

Echoing the traditional use of slatted timber shutters, openings and balconies are screened with perforate metal panels, the bespoke patterning of which was inspired by William Morris’s olive leaf design. The bronze anodised aluminium (also used for curtain walling and glazing)is rendered almost the same colour as the stone in bright light, and as shutters are moved to admit or exclude sun the apparent solidity is transformed.

The Leventis Gallery and apartments are designed to minimise energy use by avoiding potentially harmful solar gains, enhanced insulation and airtightness and use of daylighting wherever feasible. A heavyweight structure with carefully shaded openings will be less reliant on energy hungry systems than many of its lightweight, highly glazed neighbours, but will still require cooling through the summer months. Geothermal energy is harnessed via cast-in coils to provide background heating and cooling with a constant temperature of 20 degrees celsius. 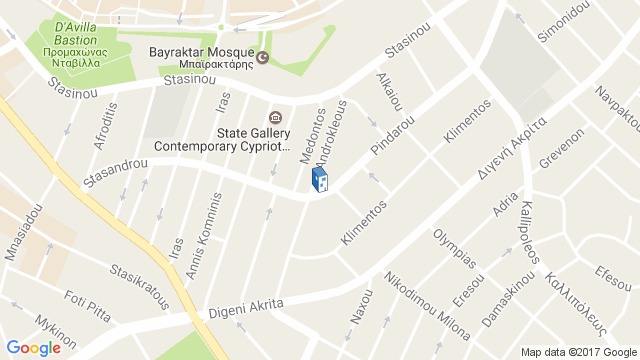